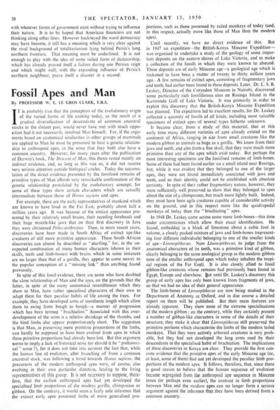 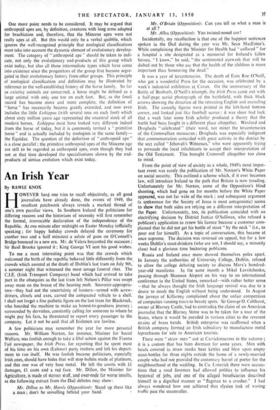 Ir is probably true that the conception of the evolutionary origin of the varied forms of life existing today, as the result of a gradual diversification of descendants of common ancestral stocks in the distant past, would never have met with much oppo- sition had it not necessarily involved Man himself. For, if the argu- ments based on anatomical similarities in other groups of mammals are applied to Man he must be presumed to bear a genetic relation- ship to anthropoid apes, in the sense that they both also have a common ancestry. However, for many years after the publication of Darwin's book, The Descent of Man, this thesis rested mainly on indirect evidence, and, so long as this was so, it did not receive very serious attention outside biological circles. Today the accumu- lation of the direct evidence presented by the fossilised remains of primitive types of Man affords very remarkable confirmation of the genetic relationship postulated by the evolutionary concept, for some of these types show certain characters which are actually intermediate between those of Homo sapiens and apes.

For example, there are the early representatives of mankind which are known to have lived in the Far East, probably about half a million years ago. It was because of the simian appearance pre- sented by their relatively small brains, their receding foreheads and their huge muzzle-like jaws that on their first discovery in Java they were christened Pithecanthropus. Then, in more recent years, discoveries have been made in South Africa of extinct ape-like creatures of still more primitive appearance. These South African discoveries can almost be described as "startling," for, in the un- expected combination of many human characters (shown in their skulls, teeth and limb-bones) with brains which in some instances are no larger than that of a gorilla, they appear to come nearer to the popular conception of a "missing link" than anything found previously.

In spite of this fossil evidence, there are some who have doubted the close relationship of Man and the apes, on the grounds that the latter, in spite of the many anatomical resemblances which they show to Man, have rather specialised characters of their own to adapt them for their peculiar habits of life among the trees. For example, they have developed arms of inordinate length which allow them to swing from bough to bough—a manner of progression which has been termed " brachiation." Associated with this over- development of the arms is a relative shrinkage of the thumbs, and the hind limbs also appear proportionately short. The suggestion is that Man, in preserving more primitive proportions of the limbs, can hardly be supposed to have been evolved from apes in which these primitive proportions had already been lost. But this argument seems to imply a lack of historical sense (or should it be " prehistori- cal " sense ?), for it does not take into account the fact that, while the human line of evolution, after branching off from a common ancestral stock, was following a trend towards Homo sapiens, the precursors of the modern anthropoid apes were, of course, also evolving in their own particular direction, leading to the living representatives of this group. It is not necessary to suppose, there- fore, that the earliest anthropoid apes had yet developed the specialised limb proportions of the modern gorilla, chimpanzee or gibbon. On the contrary, it would seem a fairly safe inference that the extinct early apes possessed limbs of more generalised pro-

portions, such as those possessed by tailed monkeys of today (and, in this respect, actually more like those of Man than the modern apes).

Until recently, we have no direct evidence of this. But in 1947 an expedition—the British-Kenya Miocene Expedition— was organised to undertake a study of the geology of some impor- tant deposits on the eastern shores of Lake Victoria, and to make a collection of the fossils in which they were known to abound. These deposits are of early Miocene age—a geological age which is reckoned to have been a matter of twenty to thirty million years ago. A few remains of extinct apes, consisting of fragmentary jaws and teeth, had earlier been found in these deposits. Later, Dr. L. S. B. Leakey, Director of the Coryndon Museum in Nairobi, discovered some particularly rich fossiliferous sites on Rusinga Island in the Kavirondo Gulf of Lake Victoria. It was primarily in order to exploit this discovery that the British-Kenya Miocene Expedition was planned. The expedition led to excellent results, for Dr. Leakey collected a quantity of fossils of all kinds, including most valuable specimens of extinct apes of several types hitherto unknown.

It became clear, from a study of this material, that at this early time many different varieties of apes already existed on the continent of Africa, ranging in size from small creatures like the modern gibbon to animals as huge as a gorilla. We know from their jaws and teeth, and also from a fine skull, that they were much more primitive than any of the apes which exist today. But perhaps the most interesting specimens are the fossilised remains of limb-bones. Some of these had been found earlier on a small island near Rusinga, but, while it was evident that they belonged to one of the larger apes, they were not found immediately associated with jaws and teeth, and so their identity could not be established with absolute certainty. In spite of their rather fragmentary nature, however, they were sufficiently well preserved to show that they belonged to apes about the size of a chimpanzee, but much more lightly built. Indeed, they must have been agile creatures capable of considerable activity on the ground, and in this respect more like the quadrupedal monkeys of today than the " brachiating " apes.

In 1948 Dr. Leakey came across some more limb-bones—this time under circumstances which allow their exact identification. He found, embedded in a block of limestone about a cubic foot in volume, a closely packed mixture of jaws and limb-bones (represent- ing four different individuals) belonging to one of the smaller kinds of ape—Limnopithecus. Now Limnopithecus, to judge from the anatomical characters of its teeth, was a primitive kind of gibbon, clearly belonging to the same zoological group as the modern gibbon (one of the smaller anthropoid apes which today inhabits the tropi- cal regions of the Far East). It is also closely allied to fossil gibbon-like creatures whose remains had previously he.en found in Egypt, Europe and elsewhere. 4ut until Dr. Leakey's discovery this group of early apes has only been known from fragments of jaws, so that we had no idea of their general appearance.

The limb-bones of Linutopithecus are now being studied in the Department of Anatomy at Oxford, and in due course a detailed report on them will be published. But their main features are already apparent. They show none of the extreme specialisations of the modern gibbon ; on the contrary, while they certainly present a number of gibbon-like characters in some of the details of their structure, they make it clear that Limnopithecus still preserved the primitive portions which characterise the limbs of the modern tailed monkeys. That they were actively arboreal creatures is very prob- able, but they had not developed the long arms used by their descendants in the specialised habit of brachiatiOn. The implications of these discoveries in Kenya are clear. They provide the first con- crete evidence that the primitive apes of the early Miocene age (or, at least, some of them) had not yet developed the peculiar limb pro- portions of the modern apes. It follows, therefore, that, since there is good reason to believe that the human sequence of evolution

became segregated from the anthropoid ape sequence in Miocene times (or perhaps even earlier), the contrast in limb proportions between Man and the modern apes can no longer form a serious argument against the inference that they have been derived from a common ancestry.

One more point needs to be considered. It may be argued that anthropoid apes are, by definition, creatures with long arms adapted for brachiation and, therefore, that the Miocene apes were not really apes at all. But this would only be a verbal quibble, which ignores the well-recognised principle that zoological classifications must take into account the dynamic element of evolutionary develop- ment. The category of •" anthropoid ape" should be taken to indi- cate, not only the evolutionary end-products of this group which exist today, but also all those intermediate types which have come into existence since the progenitors of the group first became segre- gated in their evolutionary history from other groups. This principle of zoological classification and definition may be illustrated by reference to the well-established history of the horse family. So far as existing animals are concerned, a horse might be defined as a large animal with only one toe on each foot. But, as the fossil record has become more and more complete, the definition of " horse " has necessarily become greatly extended, and now even includes the little Eohippus (with several toes on each foot) which about sixty million years ago represented the ancestral stock of all modern horses. Eohip pus must have looked very different indeed from the horse of today, but it is commonly termed a "primitive horse" and is actually included by zoologists in the same family— the Equidae. The question of the definition of "anthropoid ape" is a close parallel ; the primitive anthropoid apes of the Miocene age are still to be regarded .as anthropoid apes, even though they had not at that time developed the specialisations shown by the end- products of simian evolution which exist today.