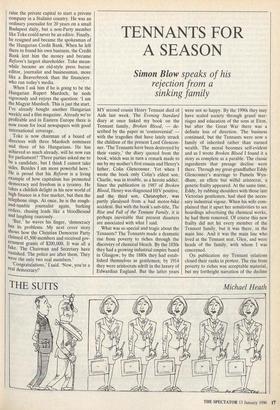 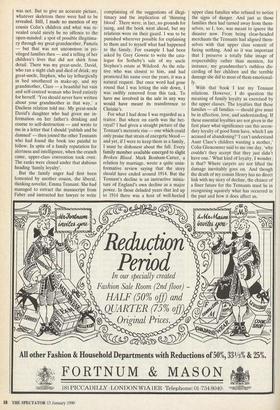 TENNANTS FOR A SEASON

Simon Blow speaks of his

rejection from a sinking family

MY second cousin Henry Tennant died of Aids last week. The Evening Standard diary at once linked my book on the Tennant family, Broken Blood, — de- scribed by the paper as 'controversial' with the tragedies that have lately struck the children of the present Lord Glencon- ner. 'The Tennants have been destroyed by their vanity,' the diary quoted from the book, which was in turn a remark made to me by my mother's first cousin and Henry's father, Colin Glenconner, Yet when I wrote the book only Colin's eldest son, Charlie, was in trouble, as a heroin addict. Since the publication in 1987 of Broken Blood, Henry was diagnosed HIV positive, and the third son, Christopher, was partly caralysed from a bad motor-bike accident. But with the book's sub-title, The Rise and Fall of the Tennant Family, it is perhaps inevitable that present disasters are associated with what I said.

What was so special and tragic about the Tennants? The Tennants made a dramatic rise from poverty to riches through the discovery of chemical bleach. By the 1830s they had a growing industrial empire based in Glasgow; by the 1880s they had estab- lished themselves as gentlemen; by 1914 they were aristocrats adrift in the luxury of Edwardian England. But the latter years were not so happy. By the 1990s they may have scaled society through grand mar- riages and education of the sons at Eton, but after the Great War there was a definite loss of direction. The business continued, but the Tennants were now a family of inherited rather than earned wealth. The moral becomes self-evident and as I wrote Broken Blood I found it a story as complete as a parable. The classic ingredients that presage decline were there. Through my great-grandfather Eddy Glenconner's marriage to Pamela Wyn- dham, an effete but wilful aristocrat, a genetic frailty appeared. At the same time, Eddy, by rubbing shoulders with those late Victorian gentlemen, had shed the neces- sary industrial vigour. When his wife com- plained that it upset her sensitivities to see hoardings advertising the chemical works, he had them removed. Of course this new frailty did not hit every member of the Tennant family, but it was there, in the main line. And it was the main line who lived at the Tennant seat, Glen, and were heads of the family, with whom I was concerned.

On publication my Tennant relations closed their ranks in protest. The rise from poverty to riches was acceptable material, but my forthright narration of the decline was not. But to give an accurate picture, whatever skeletons there were had to be revealed. Still, I made no mention of my cousin Colin's children and what was re- vealed could surely be no offence to the open-minded: a spot of possible illegitima- cy through my great-grandmother, Pamela — but that was not uncommon in pri- vileged families then — and a telling of her children's lives that did not shirk from detail. There was my great-uncle, David, who ran a night club and died of drink; my great-uncle, Stephen, who lay lethargically in bed smothered in make-up, and my grandmother, Clare — a beautiful but vain and self-centred woman who lived entirely for herself. 'You should never have written about your grandmother in that way,' a Duchess relation told me. My great-uncle David's daughter who had given me in- formation on her father's drinking and course to self-destruction — and wrote to me in a letter that I should 'publish and be damned' — then joined the other Tennants who had found the book too painful to follow. In spite of a family reputation for alertness and intelligence, when the crunch came, upper-class convention took over. The ranks were closed under that dubious heading 'family loyalty'.

But the family anger had first been fomented by another cousin, the liberal, thinking novelist, Emma Tennant. She had managed to extract the manuscript from Faber and instructed her lawyer to write complaining of the suggestions of illegi- timacy and the implication of 'thinning blood'. There were, in fact, no grounds for suing, and the book went ahead, but my relations were on their guard. I was to be punished wherever possible for explaining to them and to myself what had happened to the family. For example I had been asked by Grey Gowrie to write the cata- logue for Sotheby's sale of my uncle Stephen's estate at Wilsford. As the rela- tive who was closest to him, and had promoted his name over the years, it was a natural request. But once word had gone round that I was letting the side down, I was swiftly removed from this task. To have me involved in the sale in any way would have meant its transference to Christie's.

For what I had done I was regarded as a traitor, But where on earth was the bet- rayal? I had given a straight picture of the Tennant's meteoric rise — one which could only praise that strain of energetic blood and yet, if I were to keep them as a family, I must be dishonest about the fall. Every family member available emerged to slight Broken Blood. Mark Bonham-Carter, a relation by marriage, wrote a quite unin- formative review saying that the story should have ended around 1914. But the Tennant's decline is an instructive minia- ture of England's own decline as a major power. In those deluded years that led up to 1914 there was a host of well-heeled

upper class families who refused to notice the signs of danger. And just as those families then had turned away from them- selves, so I, too, was meant to ignore the disaster now. From being clear-headed merchants the Tennants had aligned them- selves with that upper class conceit of facing nothing. And so it was important that I preserve a totally false image of respectability rather than mention, for instance, my grandmother's ruthless dis- carding of her children and the terrible damage she did to most of them emotional- ly.

With that book I lost my Tennant relations. However, I do question the meaning of family loyalty as exercised by the upper classes. The loyalties that these families — all families — should give must be in affection, love, and understanding. If these essential loyalties are not given in the first place what significance can this secon- dary loyalty of good form have, which I am accused of abandoning? 'I can't understand Aunt Clare's children wanting a mother,' Colin Glenconner said to me one day, 'why couldn't they accept that they just didn't have one.' What kind of loyalty, I wonder, is that? Where carpets are not lifted the damage inevitably goes on. And though the death of my cousin Henry has no direct link with my story of decline, the chance of a finer future for the Tennants must lie in recognising squarely what has occurred in the past and how it does affect us.