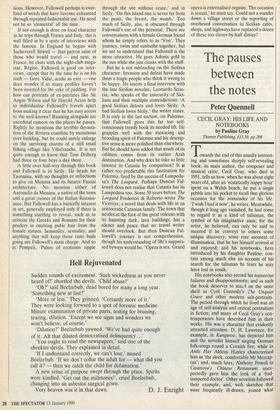 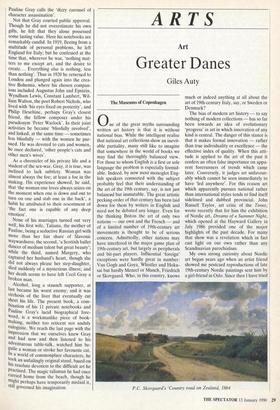 The pauses between the notes

CECIL GRAY: HIS LIFE AND NOTEBOOKS by Pauline Gray

Towards the end of this usually interest- ing and sometimes sharply self-revealing book, its main author, the composer and musical critic, Cecil Gray, who died in 1951, tells us how, when he was about eight years old, after an 'ecstatically happy hour' spent on a Welsh beach, he put a single pebble into his pocket to recall that glorious occasion for the remainder of his life. `I wish I had it now', he writes. Meanwhile, though it long ago vanished, he had come to regard it as a kind of talisman, the symbol of his imaginative aims; for the artist, he believed, can only be said to succeed if he conveys to others some unique discovery, some rare moment of illumination, that he has himself arrived at and enjoyed; and his notebooks, here introduced by his daughter Pauline, con- tain among much else an account of his search for the talisman he fears he may have lost in youth.

His notebooks also record his numerous failures and disappointments; and as such the book deserves to stavi on the same shelf as Cyril Connolly's The Unquiet Grave and other modern selt-portraits. The period through which he lived was an age of self-analysis and critical portraiture in fiction; and many of Cecil Gray's con- temporaries have described him in their works. His was a character that evidently attracted attention. D. H. Lawrence, for example, in Kangaroo, has depicted him and the novelist himself singing German folk-songs round a Cornish fire; while in Antic Hay Aldous Huxley characterised him as 'the sleek, comfortable Mr Mercap- tan; and, much later, Anthony Powell in Casanova's Chinese Restaurant unex- pectedly gave him the look of a tad- tempered doctor'. Other novelists followed their example, and, with sketches that were frequently ill-drawn, joined what

Not that Gray courted public approval. Though he did not overestimate his own gifts, he felt that they alone possessed some lasting value. Here his notebooks are remarkably candid. In 1919, fleeing from a multitude of personal problems, he left England for Italy; but he confessed at the time that, wherever he was, `nothing mat- ters to me except art, and the desire to create... Everything else is nothing, less than nothing'. Thus in 1920 he returned to London and plunged again into the crea- tive Bohemia, where his chosen compan- ions included Augustus John and Epstein, Wyndham Lewis, Constant Lambert, Wil- liam Walton, the poet Robert Nichols, who lived with 'his eyes fixed on posterity', and Philip Heseltine, perhaps Gray's closest friend, the fellow composer under his pseudonym 'Peter Warlock'. In their joint activities he became 'blissfully involved', and linked, at the same time — sometimes less blissfully — with the women he pur- sued. He was devoted to cats and women, he once declared, 'other people's cats and other men's wives'.

As a chronicler of his private life and a student of the sex-war, Gray, it is true, was inclined to lack subtlety. Woman was almost always the foe; at least a foe in the making. His experience showed, he said, that 'the woman one loves always seizes on the moment when one is down and out to turn on one and stab one in the back', a habit he attributed to their resentment of `the fact one is capable of any deep emotion'.

None of his marriages turned out very well, his first wife, Tatiana, the mother of Pauline, being a seductive Russian girl with more than her fair share of Slavonic waywardness; the second, 'a Scottish ballet dancer of medium talent but great beauty'; while the third, named Margery, who captured her husband's heart, though she did not always please her step-daughter, died suddenly of a mysterious illness; and her death seems to have left Cecil Gray a broken man.

Alcohol, long a staunch supporter, at last became his worst enemy; and it was cirrhosis of the liver that eventually cut short his life. The present book, a com- bination of his 11 private notebooks and Pauline Gray's lucid biographical fore- word, is a workmanlike piece of book- making, neither too reticent nor unduly eulogistic. We reach the last page with the impression that we ourselves knew Gray and had now and then listened to his adventurous table-talk, watched him be- guile a woman or stroke her favourite cat. In a world of commonplace characters, he took an unfailingly original stand, based on his resolute devotion to the difficult art he practised. The magic talisman he had once carried home from the beach, though he aught perhaps have temporarily mislaid it, still governed his imagination.