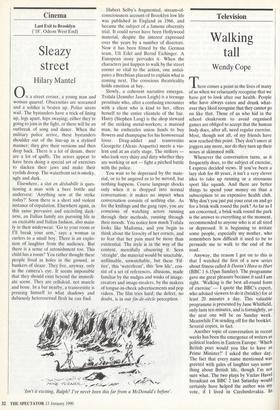 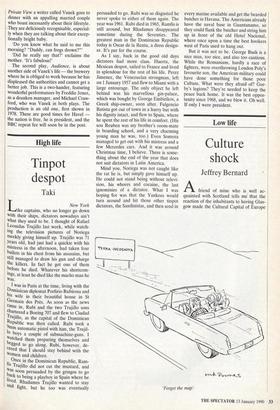 There comes a point in the lives of many of us when we reluctantly recognise that we have got to look after our health. People who have always eaten and drunk what- ever they liked recognise that they cannot go on like that. Those of us who hid in the school cloakroom to avoid organised games are obliged to accept that the human body does, after all, need regular exercise. Most, though not all, of my friends have now reached this point. They don't sneer at joggers any more, nor do they turn up their noses at skimmed milk.

Whenever the conversation turns, as it frequently does, to the subject of exercise, I express decided views. If you've been a lazy slob for 40 years, it isn't a very clever idea to take up running or a strenuous sport like squash. And there are better things to spend your money on than a subscription to an expensive health club. Why don't you just put your coat on and go for a brisk walk round the park? As far as I am concerned, a brisk walk round the park is the answer to everything at the moment, recommended to anyone who is at all tired or depressed. It is beginning to irritate some people, especially my mother, who remembers how difficult it used to be to persuade me to walk to the end of the road.

Anyway, the reason I got on to this is that I watched the first of a new series about fitness called It Doesn't Have to Hurt (BBC 1 6.15pm Sunday). The programme gave me great pleasure because it said I am right. 'Walking is the best all-round form of exercise' — I quote the BBC's expert, who advised viewers to do it (briskly) for at least 20 minutes a day. This valuable programme is presented by June Whitfield, only lasts ten minutes, and is fortnightly, so the next one will be on Sunday week. Meanwhile I'm sending off for the booklet. Several copies, in fact.

Another topic of conversation in recent weeks has been the emergence of writers as political leaders in Eastern Europe. 'Which British poet would you like to have as Prime Minister?' I asked the other day. The fact that every name mentioned was greeted with gales of laughter says some- thing about British life, though I'm not sure what. The two plays by Vaclav Havel broadcast on BBC 2 last Saturday would certainly have helped the author win my vote, if I lived in Czechoslovakia. In Private View a writer called Vanek goes to dinner with an appalling married couple who boast incessantly about their lifestyle. They are deliciously recognisable, especial- ly when they are talking about their excep- tionally bright baby.

'Do you know what he said to me this morning? "Daddy, can frogs drown?"' 'Did he really say that?' exclaims the mother. 'It's fabulous!'

The second play, Audience, is about another side of Vanek's life — the brewery where he is obliged to work because he' has displeased the authorities and cannot get a better job. This is a two-hander, featuring wonderful performances by Freddie Jones, as a drunken manager, and Michael Craw- ford, who was Vanek in both plays. The production is an old one, first shown in 1978. These are good times for Havel the nation is free, he is president, and the BBC repeat fee will soon be in the post.