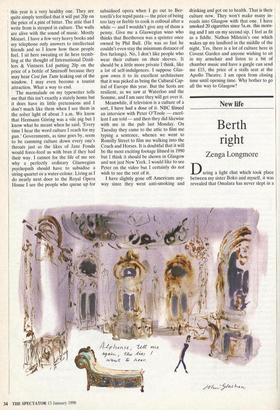 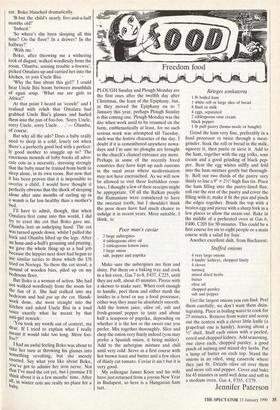 During a light chat which took place between my sister Boko and myself, it was revealed that Omalara has never slept in a

`So where's she been sleeping all this time? On the floor? In a drawer? In the hallway?'

Boko, after throwing me a withering look of disgust, walked wordlessly from the room. Olumba, sensing trouble a-brewin', picked Omalara up and carried her into the kitchen, to join Uncle Bisi, `Why the fuss about this girl?' I could hear Uncle Bisi boom between mouthfuls of egusi soup. 'What use are girls to Africa?'

But why all the ado? Does a baby really need to sleep in a cold, lonely cot when there's a perfectly good bed with a perfect- ly good mother to snuggle up to? The enormous mounds of baby books all advo- cate cots as a necessity, stressing strongly that the baby must be trained from birth to sleep alone, in its own room. But now that it has been proven that it is impossible to overlay a child, I would have thought it Perfectly obvious that the shock of sleeping alone after nine months of curling up in a womb is far less healthy than a mother's bed.

I'll have to admit, though, that when Omalara first came into this world, I did try to erect the cot that Boko gave me. Olumba lent an unhelping hand. The cot was turned upside down, whilst I pulled the back and Olumba lifted up the legs. After an hour-and-a-half' s groaning and praying, we gave the whole thing up as a bad job because the hippies next door had begun to use similar tactics to those which the US tried on Noriega. So there the cot stood, a mound of wooden bars, piled up on my bedroom floor.

But Boko is a woman of action. She had not walked wordlessly from the room for the fun of it. She had stalked into my bedroom and had put up the cot. Handi- work done, she went straight into the kitchen and asked Uncle Bisi in a loud voice exactly what he meant by that anti-girl remark.

`You took my words out of context, my dear. If I tried to explain what I really meant it would take too long. More foo- foo?'

I had an awful feeling Boko was about to take her turn at throwing his glasses into something revolting, but she merely snorted. Say what you like about Boko, You've got to admire her iron nerve. Not that I've used the cot yet, but I promise I'll think about it in a few months' time. After

all, in winter cots are really no place for a baby,