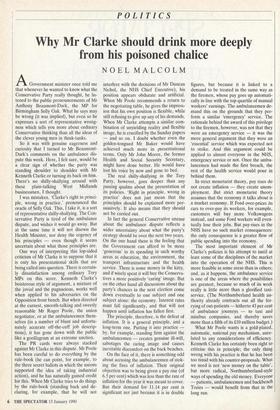 Why Mr Clarke should drink more deeply from his poisoned chalice

A Government minister once told me that whenever he wanted to know what the Conservative Party really thought, he lis- tened to the public pronouncements of Mr Anthony Beaumont-Dark, the MP for Birmingham Selly Oak. What he says may be wrong (it was implied), but even so he expresses a sort of representative wrong- ness which tells you more about ordinary Conservative thinking than all the ideas of the clever young men in think-tanks.

So it was with genuine eagerness and curiosity that I turned to Mr Beaumont- Dark's comments on the ambulance dis- pute this week. Here, I felt sure, would be a clear sign of whether the party was standing shoulder to shoulder with Mr Kenneth Clarke or turning its back on him. There's no shilly-shallying around with these plain-talking West Midlands businessmen, I thought.

I was mistaken. 'Clarke's right in princi- ple, wrong in practice,' pronounced the oracle of Selly Oak. This, I take it, is a sort of representative shilly-shallying. The Con- servative Party is tired of the ambulance dispute, and wishes it would go away. But at the same time it will not disown the Health Minister, nor deny the cogency of his principles — even though it seems uncertain about what those principles are.

One way of interpreting this lop-sided criticism of Mr Clarke is to suppose that it is only his presentational skills that are being called into question. There is certain- ly dissatisfaction among ordinary Tory MPs on this score. Kenneth Clarke's boisterous style of argument, a mixture of the jovial and the pugnacious, works well when applied to his adversaries on the Opposition front bench. But when directed at the earnest, smooth-talking and sweetly reasonable Mr Roger Poole, the union negotiator, or at the ambulancemen them- selves (in a number of blunt and unfortu- nately accurate off-the-cuff job descrip- tions), it has gone down with the public like a gorillagram at an extreme unction.

The PR cards were always stacked against Mr Clarke in this dispute. Mr Poole has been careful to do everything by the rule-book (he can point, for example, to the three secret ballots in which the unions supported the idea of taking industrial action), and he has naturally gained credit for this. When Mr Clarke tries to do things by the rule-book (standing back and de- claring, for example, that he will not interfere with the decisions of Mr Duncan Nichol, the NHS Chief Executive), his position appears obdurate and artificial. When Mr Poole recommends a return to the negotiating table, he gives the impress- ion that his own position is flexible, while still refusing to give up any of his demands. When Mr Clarke attempts a similar com- bination of unyielding reality and flexible image, he is crucified by the Sunday papers — and so on, I doubt whether even the golden-tongued Mr Baker would have achieved much more in presentational terms. Only Mr John Moore, the former Health and Social Security Secretary, might have done better. He would have lost his voice by now and gone to bed.

The real shilly-shallying in the Tory Party, however, goes deeper than any passing qualms about the presentation of its policies. 'Right in principle, wrong in practice' does not just mean that the principles should be explained more per- suasively. It also means that they should not be carried out.

In fact the general Conservative unease about the ambulance dispute reflects a wider uncertainty about what the party's strategy should be over the next two years. On the one hand there is the feeling that the Government can afford to be more `generous' in its spending in such worthy areas as education, the environment, the transport infrastructure and the health service. There is some money in the kitty, and if wisely spent it will buy the Conserva- tives a more positively 'caring' image. But on the other hand all discussions about the party's chances in the next election come down eventually to one subject and one subject alone: the economy. Interest rates must fall significantly, and that will not happen until inflation has fallen first.

The principle, therefore, is the defeat of inflation. It is a general principle, and a long-term one, Putting it into practice by, for example, standing firm against the ambulancemen — creates genuine sabotages the caring image and causes inevitable discomfort on the back benches.

On the face of it, there is something odd about accusing the ambulancemen of stok- ing the fires of inflation. Their original objection was to being given a pay rise (of 6.5 per cent) which was less than the rate of inflation for the year it was meant to cover. But their demand for 11.14 per cent is significant not just because it is in double figures, but because it is linked to a demand to be treated in the same way as the firemen, whose pay goes up automati- cally in line with the top quartile of manual workers' earnings. The ambulancemen de- mand this on the grounds that they per- form a similar 'emergency' service. The rationale behind the award of this privilege to the firemen, however, was not that they were an emergency service — it was the more general argument that they were an `essential' service which was expected not to strike. And this argument could be applied to almost everyone in the NHS, emergency service or not. Once the ambu- lancemen had made the first breach, the rest of the health service would pour in behind them.

In strict monetarist theory, pay rises do not create inflation — they create unem- ployment. But strict monetarist theory assumes that the economy it talks about is a market economy. If Ford over-prices its cars to over-pay its workers, for example, customers will buy more Volkswagens instead, and some Ford workers will even- tually lose their jobs. But pay-rises in the NHS have no such market consequences: the only consequence is a greater flow of public spending into the economy.

The most important element of Mr Clarke's policies is his attempt to instil at least some of the disciplines of the market into the operation of the NHS. This is more feasible in some areas than in others; and, as it happens, the ambulance service is one of the areas where the possibilities are greatest, because so much of its work really is little more than a glorified taxi- service. (The Northumberland health au- thority already contracts out all the fer- rying of out-patients — hitherto 43 per cent of ambulance journeys, — to taxi and minibus companies, and thereby saves more than a fifth of its £10 million budget.) What Mr Poole wants is a gold-plated, automatic, national pay mechanism, unre- lated to any considerations of efficiency. Kenneth Clarke has certainly been right to criticise this in principle; the only thing wrong with his practice is that he has been too timid with his counter-proposals. What we need is not 'new money on the table', but more radical, Northumberland-style ways of spending the old money. Everyone — patients, ambulancemen and backbench Tories — would benefit from that in the long run.