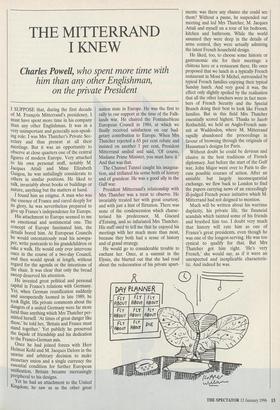 THE MITTERRAND I KNEW

him than any other Englishman, on the private President

I SUPPOSE that, during the first decade of M. François Mitterrand's presidency, I must have spent more time in his company than any other Englishman. It was in a very unimportant and generally non-speak- ing role: I was Mrs Thatcher's Private Sec- retary and thus present at all their meetings. But it was an opportunity to observe at close quarters one of the central figures of modem Europe. Very attached to his own personal staff, notably M. Jacques Attali and Mme Elizabeth Guigou, he was unfailingly considerate to others in similar positions. He liked to talk, invariably about books or buildings or nature, anything but the matters at hand.

I found him an enigma. A man who was the essence of France and cared deeply for its glory, he was nevertheless prepared to give up France's independence for Europe.

His attachment to Europe seemed to me an emotional and sentimental one. The concept of Europe fascinated him, the details bored him. At European Councils he would ostentatiously read his newspa- per, write postcards to his grandchildren or take a walk. He would only ever intervene once in the course of a two-day Council, and then would speak at length, without regard for the agenda or the intentions of the chair. It was clear that only the broad sweep deserved his attention.

He invested great political and personal capital in France's relations with Germany. Yet, when German reunification suddenly and unexpectedly loomed in late 1989, he took flight. His private comments about the dangers of a united Germany were far more lurid than anything which Mrs Thatcher per- nutted herself. 'At times of great danger like these,' he told her, 'Britain and France must stand together.' Yet publicly he preserved the façade of friendship and his dedication to the Franco-German axis.

Once he had joined forces with Herr Helmut Kohl and M. Jacques Delors in the unwise and arbitrary decision to make monetary union and a single currency the essential condition for further European unification, Britain became increasingly peripheral to his designs. Yet he had an attachment to the United Kingdom; he saw us as the other great nation state in Europe. He was the first to rally to our support at the time of the Falk- lands war. He chaired the Fontainebleau European Council in 1984, at which we finally received satisfaction on our bud- getary contribution to Europe. When Mrs Thatcher rejected a 65 per cent rebate and insisted on another 1 per cent, President Mitterrand smiled and said, 'Of course, Madame Prime Minister, you must have it.' And that was that.

The Channel Tunnel caught his imagina- tion, and titillated his sense both of history and of grandeur. He was a good ally in the Gulf war.

President Mitterrand's relationship with Mrs Thatcher was a treat to observe. He invariably treated her with great courtesy, and with just a hint of flirtation. There was none of the condescension which charac- terised his predecessor, M. Giscard d'Estaing, and so infuriated Mrs Thatcher. His staff used to tell me that he enjoyed his meetings with her much more than most, because they both had a sense of history and of grand strategy.

He would go to considerable trouble to enchant her. Once, at a summit in the Elysde, she blurted out that she had read about the redecoration of his private apart- ments: was there any chance she could see them? Without a pause, he suspended our meeting and led Mrs Thatcher, M. Jacques Attali and myself on a tour of his bedroom, kitchen and bathroom. While the world assumed they were deep in the details of arms control, they were actually admiring the latest French household design.

He liked, too, to choose some historic or gastronomic site for their meetings: a château here or a restaurant there. He once proposed that we lunch in a typically French restaurant in Mont St Michel, surrounded by typical French families enjoying their typical Sunday lunch. And very good it was, the effect only slightly spoiled by the realisation that all the other lunchers were in fact mem- bers of French Security and the Special Branch doing their best to look like French families. But in this field Mrs Thatcher essentially scored highest. Thanks to Jacob Rothschild, we held an Anglo-French sum- mit at Waddesdon, where M. Mitterrand rapidly abandoned the proceedings in favour of browsing through the originals of Haussman's designs for Paris.

Without doubt he could be devious and elusive in the best traditions of French diplomacy. Just before the start of the Gulf war, John Major went over to Paris to dis- cuss possible courses of action. After an amiable but largely inconsequential exchange, we flew back to London to find the papers carrying news of an exceedingly ill-judged French peace initiative which M. Mitterrand had not deigned to mention.

Much will be written about his wartime duplicity, his private life, the financial scandals which tainted some of his friends and brushed him too. I doubt very much that history will rate him as one of France's great presidents, even though he was one of the longest-serving. He was too cynical to qualify for that. But Mrs Thatcher got him right. 'He's very French,' she would say, as if it were an unexpected and inexplicable characteris- tic. And indeed he was.