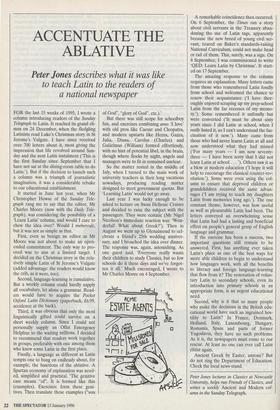 Peter Jones describes what it was like to teach Latin to the readers of a national newspaper FOR the last 15 weeks of 1995, I wrote a column introducing readers of the Sunday Telegraph to Latin. It reached its grand cli- max on 24 December, when the fledgling Latinists read Luke's Christmas story in St Jerome's Vulgate. I have since received over 700 letters about it, most giving the impression that life revolved around Sun- day and the next Latin instalment (This is the first Sunday since September that I have not sat at the dining-room table to do Latin.'). But if the decision to launch such a column was a triumph of journalistic imagination, it was a considerable rebuke to our educational establishment.

It started in June last year, when Mr Christopher Howse of the Sunday Tele- graph rang me to say that the editor, Mr Charles Moore (now with the Daily Tele- graph), was considering the possibility of a `Learn Latin' column, and would I care to chew the idea over? Would I mehercule, but it was not as simple as that.

First, even as benign an editor as Mr Moore was not about to make an open- ended commitment. The only way to pro- ceed was to aim at a limited target. I decided on the Christmas story in the rela- tively simple Latin of St Jerome's Vulgate (added advantage: the readers would know the crib, as it were, too).

Second, language-learning is cumulative. But a weekly column could hardly supply all vocabulary, let alone a grammar. Read- ers would have to acquire the Pocket Oxford Latin Dictionary (paperback, £6.99, accidence at the back).

Third, it was obvious that only the most linguistically gifted could survive on a short weekly column. Since I could not personally supply an Oflat Emergency Helpline to the waiting millions, I decided to recommend that readers work together in groups, preferably with one among them who knew some Latin in the first place.

Finally, a language as different as Latin tempts one to bang on endlessly about, for example, the functions of the ablative. A Spartan economy of explanation was need- ed, simplified and practical. The genitive case means "of'. It is formed like this (examples). Exercises: form these geni- tives. Then translate these examples ("son of God", "glory of God", etc.).'

But there was still scope for schoolboy fun, and exercises combining amo 'I love' with old pros like Caesar and Cleopatra, and modern upstarts like Hezza, Gazza, Julia, Diana, Carolus (Charles) and Gulielmus (William) formed effortlessly, with no hint of potential libel, in the brain, though where flocks by night, angels and managers were to fit in remained unclear.

So the matter rested in the middle of July, when I turned to the main work of university teachers in their long vacations nowadays, producing reading matter designed to meet government quotas. But `Learning Latin' would not go away.

Last year I was lucky enough to be asked to lecture on Swan Hellenic Cruises and decided to raise the subject with the passengers. They were ecstatic (Mr Nigel Nicolson's immediate reaction was: 'Won- derful! What about Greek?'). Then in August we went up to Glenalmond to cel- ebrate a friend's 25th wedding anniver- sary, and I broached the idea over dinner. The response was, again, astonishing. As one guest said, 'Everyone really wants their children to study Classics, but so few schools do it these days and we've forgot- ten it all.' Much encouraged, I wrote to Mr Charles Moore on 4 September. A remarkable coincidence then occurred. On 6 September, the Times ran a story about civil servants in the Treasury aban- doning the use of Latin tags, apparently because the new breed of young civil ser- vant, reared on Baker's standards-raising National Curriculum, could not make head or tail of them. This, surely, was a sign. On 8 September, I was commissioned to write `QED: Learn Latin by Christmas'. It start- ed on 17 September.

The amazing response to the column requires an explanation. Many letters came from those who remembered Latin fondly from school and welcomed the chance to renew their acquaintance CI have thor- oughly enjoyed scraping up my prep-school Latin from the far recesses of my memo- ry.'). Some remembered it unfondly but were converted (`It must be about sixty years since I did Latin at school, when I really hated it, so I can't understand the fas- cination of it now.'). Many came from those who had never learnt Latin at all and now understood what they had missed (`For many years — I am now seventy- three — I have been sorry that I did not learn Latin at school . . . '). Others saw it as a blow at modern education CI hope it will help to encourage the classical counter-rev- olution.'). Some were even using the col- umn to ensure that deprived children or grandchildren received the same advan- tages CI am trying to teach my daughters Latin from memories long ago.'). The one constant theme, however, was how useful as well as pleasurable Latin had been. The letters conveyed an overwhelming sense that Latin had had a lasting and beneficial effect on people's general grasp of English language and grammar.

If the exercise has been a success, two important questions still remain to be answered. First, has anything ever taken Latin's place as one of the best ways for more able children to begin to understand how languages work, with all the benefits to literacy and foreign language-learning that flow from it? The restoration of volun- tary Latin to secondary schools, even its introduction into primary schools in an appropriate form, is an urgent educational need.

Second, why is it that so many people who make the decisions in the British edu- cational world have such an ingrained hos- tility to Latin? In France, Denmark, Holland, Italy, Luxembourg, Hungary, Romania, Spain and parts of former Yugoslavia, they have no such problems. As it is, the newspapers must come to our rescue. At least no one can ever call Latin elitist again.

Ancient Greek by Easter, anyone? But do not ring the Department of Education. Check the local news-stand.

Peter Jones lectures in Classics at Newcastle University, helps run Friends of Classics, and writes a weekly Ancient and Modern col- umn in the Sunday Telegraph.