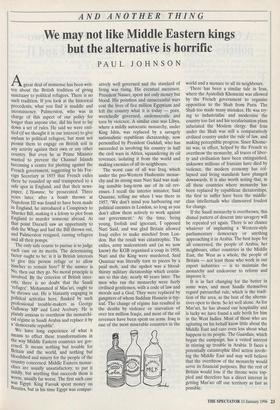 Agreat deal of nonsense has been writ- ten about the British tradition of giving sanctuary to political refugees. There is no such tradition. If you look at the historical precedents, what you find is muddle and inconsistency. Palmerston, who was in charge of this aspect of our policy for longer than anyone else, did his best to lay down a set of rules. He said we were enti- tled (if we thought it in our interest) to give asylum to political refugees, but must not permit them to engage on British soil in any activity against their own or any other country. But even he as Prime Minister wanted to prevent the Channel Islands becoming a centre for plotting against the French government, suggesting to his For- eign Secretary in 1855 that French exiles there be rounded up and transported to a safe spot in England, and that their news- paper, L'Homme , be prosecuted. Three years later, after a bomb thrown at Napoleon III was found to have been made in England, he introduced a Conspiracy to Murder Bill, making it a felony to plot from England to murder someone abroad. At that point Disraeli saw an opportunity to dish the Whigs and had the Bill thrown out, and Palmerston resigned, cursing refugees and all their pomps. The only safe course to pursue is to judge each case on its merits. The determining factor ought to be: is it in British interests to give this person refuge or to allow him/her to remain here? If the answer is No, then out they go. No moral principle is involved. By the criterion of British inter- ests, there is no doubt that the Saudi `refugee', Mohammed al Mas'ari, ought to be thrown out. He is blatantly engaging in political activities here, flanked by such professional trouble-makers as George Galloway MP and Lord Avebury. He is Plainly anxious to overthrow the monarchi- cal regime in Saudi Arabia and replace it by a 'democratic republic'. We have long experience of what it means to effect these transformations in the way Middle Eastern countries are gov- erned. It means nothing but trouble for Britain and the world, and nothing but bloodshed and misery for the people of the country concerned. Middle Eastern monar- chies are usually unsatisfactory, to put it mildly, but anything that succeeds them is worse, usually far worse. The first such case was Egypt. King Farouk spent money on floozies, but in his time Egypt was compar- atively well governed and the standard of living was rising. His eventual successor, President Nasser, spent not only money but blood. His pointless and unsuccessful wars cost the lives of five million Egyptians and left the country what it is today — poor, wretchedly governed, undemocratic and torn by violence. A similar case was Libya, where a mildly autocratic monarchy, under King Idris, was replaced by a savagely nationalistic republican dictatorship, now personified by President Gaddafi, who has succeeded in involving his country in half the civil wars in Africa, squandering its oil revenues, isolating it from the world and making enemies of all its neighbours.

The worst case of all was Iraq, which under the pro-Western Hashemite monar- chy and its strong man Nun Said was mak- ing sensible long-term use of its oil rev- enues. I recall the interior minister, Said Quazzaz, telling me when I was there in 1957, 'We don't mind you harbouring our political enemies in London, so long as you don't allow them actively to work against our government.' At the time, being young, foolish and ignorant, I opposed Nuri Said, and was glad Britain allowed Iraqi exiles to make mischief from Lon- don. But the result was catastrophic. The exiles, army malcontents and (as we now know) the KGB organised a coup in 1958, Nuri and the King were murdered, Said Quazzaz was literally torn to pieces by a paid mob, and the upshot was a blood- thirsty military dictatorship which contin- ues to this day, nearly 40 years later. The men who ran the monarchy were fairly civilised gentlemen, with a code of law and morals and a God. They were replaced by gangsters of whom Saddam Hussein is typ- ical. The change of regime has resulted in the deaths by violence or starvation of over ten million Iraqis, and most of the oil revenues have been spent on arms. Iraq is one of the most miserable countries in the world and a menace to all its neighbours.

There has been a similar tale in Iran, where the Ayatollah Khomeini was allowed by the French government to organise opposition to the Shah from Paris. The Shah too made many mistakes. He was try- ing to industrialise and modernise the country too fast and his secularisation plans infuriated the Moslem clergy. But Iran under the Shah was still a comparatively civilised country under the rule of law, and making perceptible progress. Since Khome- ini was, in effect, helped by the French to overthrow the monarchy, all traces of liber- ty and civilisation have been extinguished, unknown millions of Iranians have died by violence, the modern economy has col- lapsed and living standards have plunged downwards. It is also worth noting that, in all these countries where monarchy has been replaced by republican dictatorships, the first to suffer have been the middle- class intellectuals who clamoured loudest for change.

If the Saudi monarchy is overthrown, this dismal pattern of descent into savagery will be repeated yet again. There is no chance whatever of implanting a Western-style parliamentary democracy or anything approaching it in Arabia. The best hope for all concerned, the people of Arabia, her neighbours, other countries in the Middle East, the West as a whole, the people of Britain — not least those who work in our export industries — is to maintain the monarchy and endeavour to reform and improve it.

It is in fact changing for the better in some ways, and most Saudis themselves regard patriarchal rule, which is the tradi- tion of the area, as the best of the alterna- tives open to them. So let well alone. As for Mas'ari, he has abused our hospitality and is lucky we have found a safe berth for him in the West Indies. Most of those who are agitating on his behalf know little about the Middle East and care even less about what happens to its people. The Guardian, which began the campaign, has a vested interest in stirring up trouble in Arabia. It faces a potentially catastrophic libel action involv- ing the Middle East and may well believe that the overthrow of the monarchy would serve its financial purposes. But the rest of Britain would lose if the throne were top- pled and therefore has a direct interest in getting Mas'ari off our territory as fast as possible.