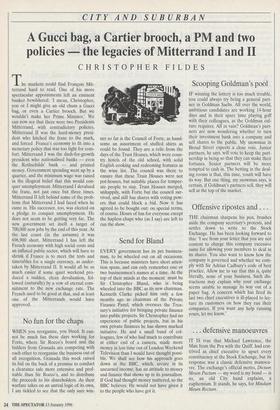 A Gucci bag, a Cartier brooch, a PM and two policies — the legacies of Mitterrand I and II

The markets could find Francois Mit- terrand hard to read. One of his more spectacular appointments left an eminent banker bewildered: 'I mean, Christopher, you or I might give an old chum a Gucci bag, or even a Cartier brooch. But we wouldn't make her Prime Minister.' We can now see that there were two Presidents Mitterrand, with contradictory policies. Mitterrand II was the hard-money presi- dent who hitched the franc to the mark, and forced France's economy to fit into a monetary policy that was too tight for com- fort. Mitterrand I was the dash-for-growth president who nationalised banks — even the Rothschilds' bank — and printed money. Government spending went up by a quarter, and the minimum wage was raised in the illogical belief that this would con- quer unemployment. Mitterrand I devalued the franc, not just once but three times. Mitterrand II left behind some of the prob- lems that Mitterrand I had faced when he came in. His successor, too, was elected on a pledge to conquer unemployment. He does not seem to be getting very far. The new government set itself a target of 700,000 new jobs by the end of this year. At the last count (in the autumn) it was 696,900 short. Mitterrand I has left the French economy with high social costs and an inflated public sector, which will have to shrink if France is to meet the tests and timetables for a single currency, as under- taken by Mitterrand II. It would all be so much easier if some quiet weekend pro- duced a sudden, clean devaluation, fol- lowed (naturally) by a vow of eternal com- mitment to the new exchange rate. The French used to be good at that, and at least one of the Mitterrands would have approved.

No fun for the chaps

WHEN you reorganise, you bleed. It can- not be much fun these days working for Forte, where Sir Rocco's board and the bidders from Granada are competing with each other to reorganise the business out of all recognition. Granada this week raised its bid on the back of a promise to conduct a clearance sale more extensive and prof- itable than Sir Rocco's, and to distribute the proceeds to his shareholders. As their warfare takes on an unreal logic of its own, I am tickled to see that the only sure win- ner so far is the Council of Forte, as hand- some an assortment of stuffed shirts as could be found. They are a relic from the days of the Trust Houses, which were coun- try hotels of the old school, with solid English cooking and redeeming features in the wine list. The council was there to ensure that these Trust Houses were not pot-houses, but suitable places for temper- ate people to stay. Trust Houses merged, unhappily, with Forte but the council sur- vived, and still has shares with voting pow- ers that could block a bid. Now it has agreed to be bought out: on special terms, of course. Hours of fun for everyone except the hapless chaps who (as I say) are left to run the show.

EVERY government has its pet business- man, to be wheeled out on all occasions. This is because ministers have short atten- tion spans, and can only remember one or two businessmen's names at a time. At the top of their minds at the moment must be Sir Christopher Bland, who is being wheeled into the BBC as its new chairman. Kenneth Clarke picked him only a few months ago as chairman of the Private Finance Panel, which oversees the Trea- sury's initiative for bringing private finance into public projects. Sir Christopher had no experience of public projects, but in his own private finances he has shown marked initiative. He and a small band of col- leagues, few of who had much to contribute at either end of a camera, made more money in less time out of London Weekend Television than I would have thought possi- ble. We shall see how his approach goes down at the BBC, which, secure in its unearned income, has an attitude to money and finance that shows up in its journalism. If God had thought money mattered, so the BBC believes, He would not have given it to the people who have got it.

IF winning the lottery is too much trouble, you could always try being a general part- ner in Goldman Sachs. All over the world, ambitious candidates are working 14-hour days and in their spare time playing golf with their colleagues, as the Goldman cul- ture requires. All in vain? Goldman's part- ners are now wondering whether to turn their investment bank into a company and sell shares to the public. My snowman in Broad Street expects a close vote. Junior partners, he says, will vote to keep the part- nership in being so that they can make their fortunes. Senior partners will be more tempted to cash in. The betting in the deal- ing rooms is that, this time, youth will have its way. But one thing, my snowman says, is certain, if Goldman's partners sell, they will sell at the top of the market.

THE chairman sharpens his pen, brushes aside the company secretary's protests, and settles down to write to the Stock Exchange. He has been looking forward to this: 'I see from your letter that you are not content to charge this company excessive sums for allowing your members to deal in its shares. You also want to know how the company is governed and whether we com- ply with Sir Adrian Cadbury's code of best practice. Allow me to say that this is, quite literally, none of your business. Such dis- tractions may explain why your exchange seems unable to manage its way out of a paper bag. A concern which has fired its last two chief executives is ill-placed to lec- ture its customers on how they run their companies. If you want any help running yours, let me know.'

IT IS true that Michael Lawrence, the Man from the Pru with the Quiff, had con- trived as chief executive to upset every constituency at the Stock Exchange, but its response was a classic defensive manoeu- vre. The exchange's official motto, Dictum Meum Pactum — my word is my bond — is so, an old City hand explains, a euphemism. It stands, he says, for Mindum Meum Rectum.