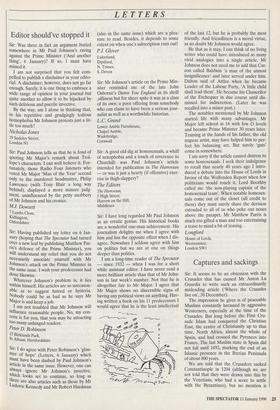 Sir: Having published my letter on 6 Jan- uary (hoping

that The Spectator had turned over a new leaf by publishing Matthew Par- ris's defence of the Prime Minister), you will understand my relief that you do not necessarily associate yourself with Mr Johnson's attack on the Prime Minister in the same issue. I wish your predecessor had done likewise.

Whatever Johnson's problem is, it lies within himself. His articles are so unreason- able as to suggest hatred or hysteria. Nobody could be as bad as he says Mr Major is and keep a job. I am not troubled that Mr Johnson will influence reasonable people. No, my con- cern is for you, that you may be attracting too many unhinged readers. Peter D. Robinson