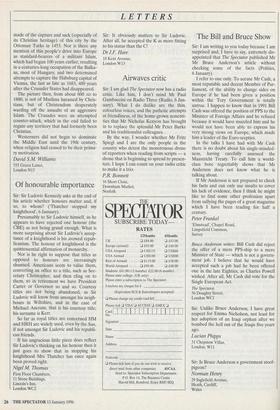 The Bill and Bruce Show

Sir: I am writing to you today because I am surprised and, I have to say, extremely dis- appointed that The Spectator published Mr Mr Bruce Anderson's article without checking some of the facts (Politics, 6 January).

I refer to one only. To accuse Mr Cash, a most reputable and decent Member of Par- liament, of the ability to change sides on Europe if he had been given a position within the Tory Government is totally untrue. I happen to know that in 1991 Bill Cash was offered the position of PPS to the Minister of Foreign Affairs and he refused because it would have muzzled him and he would not have been able to express his very strong views on Europe, which made him a leader of the Euro-sceptics.

In the talks I have had with Mr Cash there is no doubt about his single-minded- ness, having carefully assessed the Maastricht Treaty. To call him a world- class bore regrettably shows that Mr Anderson does not know what he is talking about.

If Mr Anderson is not prepared to check his facts and can only use insults to cover his lack of evidence, then I think he might like to find some other profession apart from sullying the pages of a great magazine which I have been reading for half a century.