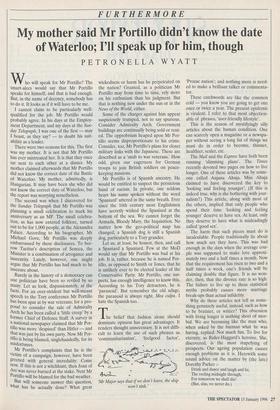 My mother said Mr Portillo didn't know the date of Waterloo; I'll speak up for him, though

Who will speak for Mr Portillo? The smart-alecs would say that Mr Portillo speaks for himself, and that is bad enough. But, in the name of decency, somebody has to do it. It looks as if it will have to be me.

I cannot claim to be particularly well- qualified for the job. Mr Portillo would probably agree. In his days at the Employ- ment Department, and my days at the Sun- day Telegraph, I was one of the first — may I boast, as they say? — to doubt his suit- ability as a leader.

There were two reasons for this. The first was my mother. It is not that Mr Portillo has ever mistreated her. It is that they once sat next to each other at a dinner. My mother claimed afterwards that Mr Portillo did not know the correct date of the Battle of Waterloo. My mother, admittedly, is Hungarian. It may have been she who did not know the correct date of Waterloo, but the report was worrying nonetheless.

The second was when I discovered for the Sunday Telegraph that Mr Portillo was planning a small celebration to mark his anniversary as an MP. The small celebra- tion, as has now entered folklore, turned out to be for 1,000 people, at the Alexandra Palace. According to his biographer, Mr Michael Gove, Mr Portillo was deeply embarrassed by these disclosures. To bor- row Tacitus's description of Seneca, the Minister is a combination of arrogance and insecurity. Lately, however, one might argue that Mr Portillo has had much to be insecure about.

Rarely in the history of a democracy can one politician have been so reviled by so many. Let us look, dispassionately, at the facts. For an over-strident but well-meant speech to the Tory conference Mr Portillo has been spat at by war veterans; for a pro- posal to consider the, sale of Admiralty Arch he has been called a 'little creep' by a former Chief of Defence Staff. A survey in a national newspaper claimed that Mr Por- tillo was more 'despised' than Hitler — and that was just by his own party. Now Mr Por- tillo is being blamed, singlehandedly, for its misfortunes.

Mr Portillo's complaints that he is the victim of a campaign, however, have been greeted with general incredulity. Come now. If this is not a witchhunt, then Joan of Arc was never burned at the stake. Next Mr Portillo will be blamed for the bad weather.

But will someone answer this question, what has he actually done? What great wickedness or harm has he perpetrated on the nation? Granted, as a politician Mr Portillo may from time to time, rely more on his enthusiam than his judgment. But that is nothing new under the sun or in the News of the World, either.

Some of the charges against him appear suspiciously trumped, not to say spurious. Consider Admiralty Arch. Government buildings are continually being sold or rent- ed. The opprobrium heaped upon Mr Por- tillo seems disproportionate to his crime. Consider, too, Mr Portillo's plans for closer military links with the Japanese. These are described as a 'snub to war veterans.' How odd, given our eagerness for German troops to join British soldiers on peace- keeping missions.

Mr Portillo is of Spanish ancestry. He would be entitled to suspect the pernicious hand of racism. In private, one seldom hears his name spoken without the word `Spaniard' uttered in the same breath. Ever since the 16th century most Englishmen have secretly wished the Spaniard at the bottom of the sea. We cannot forget the Armada, Bloody Mary, the Inquisition. No matter how the geo-political map has changed, a Spanish dog is still a Spanish dog, particularly to a Tory grandee.

Let us, at least, be honest, then, and call a Spaniard a Spaniard. Few at the MoD would say that Mr Portillo was bad at his job. It is, rather, because he is named Por- tillo, as opposed to Smith or Jones, that he is unlikely ever to be elected leader of the Conservative Party. Mr Portillo, one sus- pects, has enough intelligence to know this. According to his Tory detractors, he is `paranoid'. But remember the old adage, the paranoid is always right. Mea culpa. I hate the Spanish too.

The belief that fashion alone should dominate opinion has great advantages. It renders thought unnecessary. It is not diffi- cult to learn the use of such phrases as `communitarianism', leelgood factor', Mr Major Major says that if we don't leave, the ship won't sink' Prozac nation'; and nothing more is need- ed to make a brilliant talker or commenta- tor.

These catchwords are like the common cold — you know you are going to get one once or twice a year. The present epidemic is virulent. I refer to that most objection- able of phrases, 'user-friendly lifestyle'.

This is the season of mystifyingly silly articles about the human condition. One can scarcely open a magazine or a newspa- per without seeing a long list of things we must do in order to become, thinner, healthier, sexier, etc.

The Mail and the Express have both been running 'slimming plans'. The Times recently devoted two pages on how to live longer. One of these articles was by some- one called Anjana Ahuja. Miss Ahuja claimed to have discovered the key to `looking and feeling younger'. (If this is indeed true, why is she bothering with jour- nalism?) This article, along with most of the others, implied that only people who spend their time 'looking and feeling younger' deserve to have sex. At least, only they deserve to have what is misleadingly called 'good sex'.

The harm that such pieces must do is incalculable. People traditionally lie about how much sex they have. This was bad enough in the days when the average cou- ple was supposed to make love approxi- mately two and a half times a month. Now that the requirement has risen to two and a half times a week, one's friends will be claiming double that figure. It is no won- der, then, that the divorce rate is so high. The failure to live up to these statistical myths probably causes more marriage break-ups than actual infidelity.

Why do these articles not tell us some- thing genuinely useful, instead, such as how to be brainier, or wittier? This obsession with living longer is nothing short of mor- bid. We are becoming like the man who, when asked by the barman what he was having, replied: Not much fun. To live for eternity, as Rider-Haggard's heroine, She, discovered, is the most stupefying of prospects. Our ageing population causes enough problems as it is. Herewith some sound advice on the matter by (the late) Dorothy Parker :-

Drink and dance and laugh and lie, The reeling midnight through, For tomorrow we shall die!