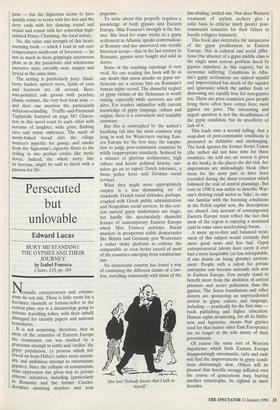 BURY ME STANDING: THE GYPSIES AND THEIR JOURNEY by Isabel Fonseca Chatto, £18, pp. 304 Nomadic entrepreneurs and commu- nism do not mix. There is little room for a freelance tinsmith or fortune-teller in the central plan; nor is a dictatorship going to tolerate travelling tribes, with their inbuilt disregard for identity papers and national boundaries.

It is not surprising, therefore, that in most of the countries of Eastern Europe the communist era was marked by a gruesome attempt to settle and 'civilise' the gypsy population, (a process which fol- lowed on from Hitler's rather more system- atic and ambitious attempt to exterminate gypsies). Since the collapse of communism, state oppression has given way to private citizens' initiatives, including (particularly in Romania and the former Czecho- slovakia) alarming murders and near pogroms.

To write about this properly requires a knowledge of both gypsies and Eastern Europe. Miss Fonseca's strength is the for- mer. She lived for some weeks in a gypsy settlement in Albania; speaks conversation- al Romany and has uncovered one terrific historical scoop— that in the last century in Romania, gypsies were bought and sold as slaves.

Some of the resulting reportage is very vivid. No one reading this book will be in any doubt that arson attacks on gypsy set- tlements are a serious blot on Romania's human rights record. The shameful neglect of gypsy victims of the Holocaust is worth raising, especially while survivors are still alive. For readers unfamiliar with current knowledge of gypsy language, culture and origins, there is a convenient and readable summary.

But this is outweighed by the author's headlong fall into the most common trap lying in wait for Westerners visiting East- ern Europe for the first time: the tempta- tion to judge post-communist countries by wildly inappropriate standards. Seduced by a mixture of glorious architecture, high culture and heroic political history, out- siders go on to expect Dutch tolerance, a Swiss police force and German social services.

What they might more appropriately employ is a less demanding set of standards: French racial attitudes, perhaps, coupled with Greek public administration and Neapolitan social services. In this con- text current gypsy misfortunes are tragic, but hardly the spectacularly shameful feature of contemporary Eastern Europe which Miss Fonseca portrays. Racial murders in prosperous stable democracies like Britain and Germany give Westerners a rather shaky platform to criticise the comparable or even better record of most of the countries emerging from totalitarian- ism.

No democratic country has found a way of combining the different claims of a law- less, travelling community with those of the 'Hee hee! Nobody knows that I talk to myself.' law-abiding, settled one. Nor does Western treatment of asylum seekers give a solid basis to criticise much poorer post- communist countries for their failure to handle refugees humanely.

This book also overstates the uniqueness of the gypsy predicament in Eastern Europe. Not in cultural and social afflic- tions (the absence of a gypsy middle class is the single most serious problem faced by gypsies anywhere in this region); but in economic suffering. Conditions in Alba- Ma's gypsy settlements are indeed squalid and impoverished but much of the squalor and ignorance which the author finds so distressing are equally true for non-gypsies too. These are poor countries; poor people living there often have rotten lives; most gypsies are poor. The interesting and urgent question is not the dreadfulness of the gypsy condition, but its specificity or lack of it.

This leads onto a second failing: that a snap-shot of post-communist conditions is presented as definitive and unchanging.

The book ignores the former Soviet Union (the author did not have time for these countries, she told me; no reason is given in the book); in the places she did visit, her impressions are misleadingly bleak (they seem for the most part to have been recorded during the sharp recession which followed the end of central planning). But even in 1990 it was unfair to describe War- saw's thriving retail sector as `fake'; to any- one familiar with the booming conditions in the Polish capital now, the descriptions are absurd. Any account of contemporary Eastern Europe must reflect the fact that most of the region is enjoying a sustained (and in some cases accelerating) boom.

A more up-to-date and balanced treat- ment of this subject would certainly find more good news and less bad. Gypsy entrepreneurial talents have rarely if ever had a more hospitable (or less inhospitable, if one insists on being gloomy) environ- ment. People with a talent for private enterprise can become seriously rich now in Eastern Europe. Few people stand to benefit more from the abolition of central planners and secret policemen than the gypsies. The Soros foundations and other donors are sponsoring an unprecedented revival in gypsy culture and language, including — practically for the first time book publishing and higher education. Human rights monitoring, for all its flabbi- ness and hypocrisy, means that gypsies (and for that matter other East Europeans) are no longer at the sole mercy of their governments.

Of course the same sort of Western impatience which finds Eastern Europe disappointingly unromantic, tatty and rude will find the improvements in gypsy condi- tions distressingly slow. Others will be pleased that horrific wrongs inflicted over the course of generations may, barring another catastrophe, be righted in mere decades.