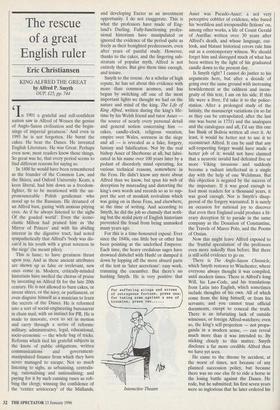 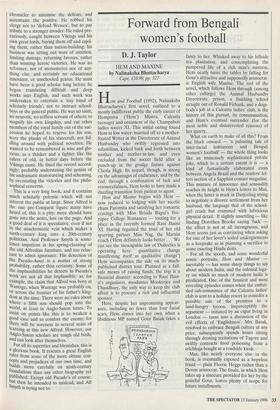 The rescue of a great English ruler

KING ALFRED THE GREAT by Alfred P. Smyth OUP, £25, pp. 744 In 1901 a grateful and self-confident nation saw in Alfred of Wessex the genius of Anglo-Saxon civilisation and the begin- nings of imperial greatness.' And even in 1995 he is not forgotten. He burnt the cakes. He beat the Danes. He invented English Literature. He was Great. Perhaps even now, most readers know those things. So great was he, that every period seems to find different reasons for saying so.

In 1800 he would have been remembered as the founder of the Common Law, and the Shires, and Oxford University. Keats, a keen liberal, had him down as a freedom- fighter, fit to be mentioned with the un- pronounceable Polish gentleman who stood up to the Russians. He dreamed of an Alfred bust, gazing 'with anxious pitying eyes. As if he always listened to the sighs Of the goaded world'. Even the icono- clastic Milton had praised him as 'the Mirror of Princes' and with his abiding interest in the digestive tract, had noted sympathetically that Alfred's 'body was dis- eas'd in his youth with a great soreness in the siege' (he meant piles).

This is fame; to have greatness thrust upon you. And as these ancient attributes are shown up as false or irrelevant, new ones come in. Modern, critically-minded historians have swelled the chorus of praise by inventing an Alfred fit for the late 20th century. He is not allowed to burn cakes, or invent shires, or the navy, or parliament, or even disguise himself as a musician to learn the secrets of the Danes. He is reformed into a sort of social-engineering bureaucrat in chain mail, with an instinct for PR. He is made to innovate, even to set in motion and carry through a series of reforms: military, administrative, legal, educational, socio-economic — the whole bag of tricks. Reforms which tied his grateful subjects in the knots of public obligations, written communications and government- manipulated finance from which they have never managed to escape. Not so much listening to sighs, as urbanising, centralis- ing, rationalising and nationalising; and paying for it by such cunning ruses as rob- bing the clergy, winning the confidence of the `rentier aristocracy' of the Midlands, and developing Exeter as an investment opportunity. I do not exaggerate. This is what the professors have made of Eng- land's Darling. Fully-functioning profes- sional historians have manipulated or ignored the evidence of the period quite as freely as their benighted predecessors, even after years of painful study. However, thanks to the cakes, and the lingering sub- stratum of popular myth, Alfred is not entirely theirs. But give them time enough, and tenure.

Smyth to the rescue. As a scholar of high repute, he has set about this evidence with more than common acumen, and has begun by switching off one of the most important lights we thought we had on the nature and mind of the king. The Life of King Alfred, written during the king's life- time by his Welsh friend and tutor Asser the source of nearly every personal detail and general notion concerning him cakes, candle-clock, religious vocation, empire over Wales, soreness in the siege and all — is revealed as a fake, forgery, fantasy and falsification. Not by the real bishop Asser of Sherborne at all, but fabri- cated in his name over 100 years later by a pedant of disorderly mind operating, for various technical reasons, somewhere in the Fens. He didn't know any more about Alfred than we know, but spun his web of deception by misreading and distorting the king's own words and records so as to sup- port the sort of monkish revivalism which was going on in those Fens, and elsewhere, at the time of writing. And according to Smyth, he did the job so clumsily that noth- ing but the stolid piety of English historians prevented the fraud from being unmasked many years ago.

For this is a time-honoured exposé. Ever since the 1840s, one little boy or other has been pointing at the unclothed Emperor. Each time, the heavy credulous sages have drowned disbelief with Hush! or damped it down by lopping off the more absurd parts of the text as 'later accretions': easy work, trimming the cucumber. But there's no hushing Smyth. He is very positive that Interactive Theatre Asser was Pseudo-Asser: a not very perceptive cobbler of evidence, who based his 'worthless and irresponsible fictions' on, among other works, a life of Count Gerald of Aurillac written over 30 years after Alfred's death, and whose language, out- look, and blatant historical errors rule him out as a contemporary witness. We should forget him and disregard much of what has been written by the light of his graduated candle down to the present day.

Is Smyth right? I cannot do justice to his arguments here, but after a decade of going over the same ground with increasing bewilderment at the oddness and incon- gruity of this text, I am on his side. If this life were a fiver, I'd take it to the police- station. After a prolonged study of the latinity, the manuscript variations (in so far as they can be extrapolated, after the last one was burnt in 1731) and the analogues and the catalogues and all, I'd say this one has Bank of Bolivia written all over it. At least, it would be better not to use it to reconstruct Alfred. It can be said that any self-respecting forger would have made a better job of it; would not have claimed that a neurotic invalid had defeated five or more Viking invasions and suddenly become a radiant intellectual in a single day with the help of one Welshman. But this objection is negated by the success of the imposture. If it was good enough to fool most readers for a thousand years, it was good enough. Nor is Smyth's disap- proval of the forgery warranted. It is surely an occasion for national joy to discover that even then England could produce a lit- erary deception fit to parade in the same company as the Donation of Constantine, the Travels of Marco Polo, and the Poems of Ossian.

Now this might leave Alfred exposed to the 'fruitful speculation' of the professors even more nakedly than before. But there is still solid evidence to go on.

There is The Anglo-Saxon Chronicle, which Smyth restores to Winchester, where everyone always thought it was compiled, until modern times. There is Alfred's long Will, his Law-Code, and his translations from Latin into English, which sometimes include thoughts of his own. All of which come from the king himself, or from his servants; and you cannot trust official documents, except to conceal the truth. There is an infuriating lack of outside witnesses, or foreign Alfred-watchers; even so, the king's self-projection — not propa- ganda in a modern sense, — can reveal much more than it was intended to. By sticking closely to this matter, Smyth discloses a far more credible Alfred than we have yet seen.

He came to the throne by accident, at the worst of times, not because of any planned succession policy, but because there was no one else fit to ride a horse in the losing battle against the Danes. He rode, but he submitted; his first seven years were so inglorious that he later ordered his chronicler to minimise the defeats, and accentuate the positive. He robbed his clergy not to 'defend Wessex', but to pay tribute to a stronger invader. He ruled pre- cariously, caught between Vikings and his own great lords, buying them off and cajol- ing them, rather than nation-building; his business was sitting out wars of attrition, limiting damage, returning favours, rather than winning heroic victories. He was no reformer; not of monasteries nor of any- thing else, and certainly no educational innovator, or unschooled genius. He must have been a good scholar long before he began translating difficult and deep works into English, and such work was undertaken to entertain a 'tiny band of scholarly friends', not to instruct school- boys or the general public. He was no saint, no neurotic, no selfless servant of others; to magnify his own kingship, and cut other members of the royal family out of the suc- cession he hoped to reserve for his son, were the planks of his statecraft, not fid- dling around with political novelties. He wanted to be remembered as wise and glo- rious, as a thinker and a fighter like the rulers of old, in better days before the Vikings came. He fixed the record accord- ingly; probably understating the genius of his undramatic manoeuvring and scheming, by overstating the victories and the philo- sophical concerns.

This is a very long book, and it contains much scholarly polemic which will not interest the public at large. Since Alfred is the one pre-Conquest figure many have heard of, this is a pity; more should have gone into the notes, less on the page. And a good deal of it is speculative, even if not in the anachronistic vein which makes a ninth-century king into a 20th-century politician. And Professor Smyth is some- times impatient in his spring-cleaning of the old Alfredian furniture, and too reluc- tant to admit ignorance. His detection of the Pseudo-Asser is a matter of strong probability, rather than certainty. Some of the implausibilities he detects in Pseudo's work are not all that implausible: as, for example, the claim that Alfred was born at Wantage, when Wantage was probably on, or across the frontier of his father's king- dom at the time. There were no rules about where a fifth son should pop into the world, at least in Anglo-Saxon times. To insist on points like this is to weaken a good case and to comfort the enemy; for there will be soreness in several seats of learning at this new Alfred. However, our Anglo-Saxon scholars are tough old birds, and can look after themselves.

For all its asperities and blemishes, this is a glorious book. It rescues a great English ruler from some of the more obtuse con- cepts and prejudices of our own time, and builds more carefully on ninth-century foundations than any other biography yet Published. Except old Pseudo's of course; but then he intended to mislead, and All Smyth is trying not to.