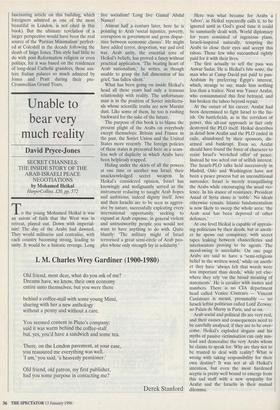 Unable to bear very much reality

SECRET CHANNELS: THE INSIDE STORY OF THE ARAB-ISRAELI PEACE NEGOTIATIONS by Mohamed Heikal HarperCollins, £20, pp. 572 To the young Mohamed Heikal it was an axiom of faith that the West was in retreat, played out. Down with imperial- ism! The day of the Arabs had dawned. They would militarise and centralise, with each country becoming strong, leading to unity. It would be a historic revenge. Long live socialism! Long live Gamal Abdul Nasser!

Almost half a century later, here he is pointing to Arab 'social injustice, poverty, corruption in government and gross dispar- ities between economic classes'. He might have added terror, despotism, war and civil war. Arab unity, the essential core of Heikal's beliefs, has proved a fancy without practical application. 'The beating heart of Arab nationalism,' he writes, as though unable to grasp the full dimension of his grief, 'has fallen silent.'

What has been going on inside Heikal's head all these years had only a tenuous relationship with reality. The unfortunate man is in the position of Soviet intellectu- als whose scientific truths are now Marxist dust. Like some of them, he too is rushing backward for the sake of the future.

The purpose of this book is to blame the present plight of the Arabs on everybody except themselves: Britain and France in the past, the Soviet Union and the United States more recently. The foreign policies of these states is presented here as a seam- less web of duplicity in which Arabs have been helplessly trapped.

Hiding under the skirts of all the powers at one time or another was Israel, their unacknowledged secret weapon. In Heikal's considered opinion, Israel has knowingly and malignantly served as the instrument reducing to naught Arab hopes and ambitions, indeed dignity itself. Jews and then Israelis are to be seen as aggres- sive by nature, successfully exploiting every international opportunity, seeking to expand at Arab expense, in general violent and untrustworthy people you would not want to have anything to do with. Quite bluntly: 'The military might of Israel terrorised a great semi-circle of Arab peo- ples whose only strength lay in solidarity.' Here was what became for Arabs a `taboo', as Heikal repeatedly calls it, to be ignored until in God's good time it could be summarily dealt with. World diplomacy for years consisted of ingenious plans, Israeli-inspired naturally, tempting the Arabs to close their eyes and accept this taboo. Those few who succumbed rightly paid for it with their lives.

The first actually to sell the pass was Anwar Sadat. He is Heikal's bete noire, the man who at Camp David put paid to pan- Arabism by preferring Egypt's interest, which, strange to say, made him nothing less than a traitor. Next was Yasser Arafat, who consummated this first betrayal, and has broken the taboo beyond repair.

At the outset of his career, Arafat had been determined to fight Israel to the fin- ish. On battlefields, as in the corridors of power, this all-out approach in fact only destroyed the PLO itself. Heikal describes in detail how Arafat and the PLO ended in exile, abandoned by their sponsors, dis- armed and bankrupt. Even so, Arafat should have found the force of character to resist Israel's 'wretched offer' of peace. Instead he too acted out of selfish interest. The Israeli-PLO talks held successively in Madrid, Oslo and Washington have not been a peace process but an unconditional surrender. Israel is merely tranquillising the Arabs while encouraging the usual vio- lence. In his stance of resistance, President Assad of Syria alone is 'noble'. No ideals otherwise remain. Islamic fundamentalism is now likely to sweep the whole area: 'the Arab soul has been deprived of other defences.'

At one level Heikal is capable of apprais- ing politicians by their deeds, but at anoth- er he spews out conspiracy, with secret tapes leaking between chancelleries and interlocutors proving to be agents. The mood-swing is unreliable. On one page Arabs are said to have a 'semi-religious belief in the written word,' while on anoth- er they have 'always felt that words were less important than deeds,' while yet else- where they rely 'on the broad meaning of statements'. He is cavalier with names and numbers. There is no CIA department head called Venice Contraro — Vincent Canistraro is meant, presumably — no Israeli leftist politician called Lotif Zerway, no Palais de Marny in Paris, and so on.

Arab social and political ills are very real, and their causes and consequences need to be carefully analysed, if they are to be over- come. Heikal's exploded slogans and his myths of passive victimisation can only mis- lead and demoralise the very Arabs whom he claims to speak for. Why are they not to be trusted to deal with reality? What is wrong with taking responsibility for their own destiny? It was not at all Heikal's intention, but even the most hardened sceptic is pretty well bound to emerge from this sad stuff with a new sympathy for Arafat and the Israelis in their mutual dilemma.