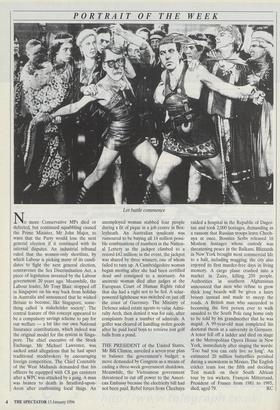 Let battle commence No more Conservative MPs died or defected, but continued squabbling caused the Prime Minister, Mr John Major, to warn that the Party would lose the next general election if it continued with its internal disputes. An industrial tribunal ruled that the women-only shortlists, by which Labour is picking many of its candi- dates to fight the next general election, contravenes the Sex Discrimination Act, a piece of legislation invented by the Labour government 20 years ago. Meanwhile, the Labour leader, Mr Tony Blair, stopped off in Singapore on his way back from holiday in Australia and announced that he wished Britain to become, like Singapore, some- thing called 'a stakeholder society'. The central feature of this concept appeared to be a compulsory savings scheme to pay for our welfare — a bit like our own National Insurance contributions, which indeed was the original model for the system in Singa- pore. The chief executive of the Stock Exchange, Mr Michael Lawrence, was sacked amid allegations that he had upset traditional stockbrokers by encouraging foreign competition. The Chief Constable of the West Midlands demanded that his officers be equipped with CS gas canisters after a WPC was attacked by a gang. A man was beaten to death in Stratford-upon- Avon after confronting local thugs. An unemployed woman stabbed four people during a fit of pique in a job centre in Bex- leyheath. An Australian syndicate was rumoured to be buying all 14 million possi- ble combinations of numbers in the Nation- al Lottery as the jackpot climbed to a record £42 million; in the event, the jackpot was shared by three winners, one of whom failed to turn up. A Cambridgeshire woman began snoring after she had been certified dead and consigned to a mortuary. An anorexic woman died after judges at the European Court of Human Rights ruled that she had a right not to be fed. A solar- powered lighthouse was switched on just off the coast of Guernsey. The Ministry of Defence asked estate agents to value Admi- ralty Arch, then denied it was for sale, after complaints from a number of admirals. A golfer was cleared of handling stolen goods after he paid local boys to retrieve lost golf balls from a pond.

THE PRESIDENT of the United States, Mr Bill Clinton, unveiled a seven-year plan to balance the government's budget: a move demanded by Congress as a means of ending a three-week government shutdown. Meanwhile, the Vietnamese government threatened to cut off power to the Ameri- can Embassy because the electricity bill had not been paid. Rebel forces from Chechnya raided a hospital in the Republic of Dages- tan and took 2,000 hostages, demanding as a ransom that Russian troops leave Chech- nya at once. Bosnian Serbs released 16 Moslem hostages whose custody was threatening peace in the Balkans. Blizzards in New York brought most commercial life to a halt, including mugging; the city also enjoyed its first murder-free days in living memory. A cargo plane crashed into a market in Zaire, killing 250 people. Authorities in southern Afghanistan announced that men who refuse to grow thick long beards will be given a hairy broom instead and made to sweep the roads. A British man who succeeded in becoming the first person ever to walk unaided to the South Pole rang home only to be told by his grandmother that he was stupid. A 99-year-old man completed his doctoral thesis at a university in Germany. A tenor fell off a ladder and died on stage at the Metropolitan Opera House in New York, immediately after singing the words: `Too bad you can only live so long'. An estimated 20 million butterflies perished during a snowstorm in Mexico. The English cricket team lost the fifth and deciding Test match on their South African tour by ten wickets. Francois Mitterrand, President of France from 1981 to 1995,