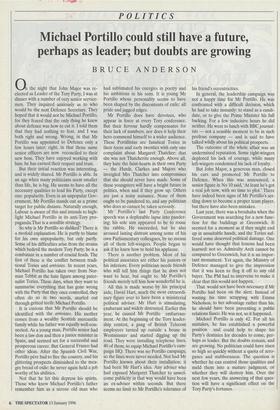 Michael Portillo could still have a future, perhaps as leader; but doubts are growing

On the night that John Major was re- elected as Leader of the Tory Party, I was at dinner with a number of very senior service- men. They inquired anxiously as to who would be the next Defence Secretary. They hoped that it would not be Michael Portillo, for they feared that the only thing he knew about defence was how to cut it. I told them that they had nothing to fear, and I was both right and wrong. Wrong, in that Mr Portillo was appointed to Defence only a few hours later; right, in that those same senior officers are now reconciled to their new boss. They have enjoyed working with him; he has earned their respect and trust.

But their initial reaction was interesting, and is widely shared. Mr Portillo is able. In an age when many politicians seem smaller than life, he is big. He seems to have all the necessary qualities to lead his Party, except one: popularity. Even in an unpopular Gov- ernment, Mr Portillo stands out as a prime target for public distaste. Naturally enough, Labour is aware of this and intends to high- light Michael Portillo in its anti-Tory pro- paganda.That is a sensible strategy.

So why is Mr Portillo so disliked? There is a twofold explanation. He is partly to blame for his own unpopularity, but only partly. Some of his difficulties arise from the strains which bedevil the modern Tory Party; he is a combatant in a number of crucial feuds. The first of these is the conflict between tradi- tional Tories and arrivistes. In recent years, Michael Portillo has taken over from Nor- man Tebbit as the hate figure among pater- nalist Tories. These days, when they want to summarise everything that has gone wrong with the Party that they once controlled, they often do so in two words, snarled out through gritted teeth: Michael Portillo.

It is curious that Mr Portillo should be identified with the arrivistes. His mother comes from a wealthy Scottish mercantile family while his father was equally well-con- nected. As a young man, Portillo senior had been a law don and then a junior minister in Spain, and seemed set for a successful and prosperous career. But General Franco had other ideas. After the Spanish Civil War, Portillo pore had to flee the country, and his glittering prospects diminished to the mea- gre bread of exile: he never again held a job worthy of his abilities.

Not that he let this depress his spirits. Those who knew Michael Portillo's father remember him as a serene old man who had sublimated his energies in poetry and his ambitions in his sons. It is young Mr Portillo whose personality seems to have been shaped by the discontents of exile: all pride and jagged edges.

Mr Portillo does have devotees, who appear in force at every Tory conference. But their fervour hardly compensates for their lack of numbers, nor does it help their hero commend himself to a wider audience. These Portillistas are fanatical Tories in their teens and early twenties with only one complaint about Margaret Thatcher: that she was not Thatcherite enough. Above all, they hate the faint-hearts in their own Party — the Hurds, Clarkes and Majors who inveigled Mrs Thatcher into compromises that she should never have made. Some of these youngsters will have a bright future in politics, when and if they grow up. Others are just a noisy nuisance. None of them ought to be pandered to, and any politician who does so cannot be taken seriously.

Mr Portillo's last Party Conference speech was a deplorable lapse into pander- ing; his sole aim appeared to be to rouse the rabble. He succeeded, but he also aroused lasting distrust among some of his own Parliamentary colleagues, by no means all of them left-wingers. People began to ask if he knew how to hold his applause.

There is another problem. Most of his political associates are either his juniors or his inferiors. Every politician needs friends who will tell him things that he does not want to hear, but ought to. Mr Portillo's friends merely tell him how wonderful he is.

All this is made worse by his principal aide, David Hart, much the most extraordi- nary figure ever to have been a ministerial political adviser. Mr Hart is stimulating, exuberant and widely distrusted. Earlier this year, he caused Mr Portillo embarrass- ment. At the beginning of the Tory leader- ship contest, a gang of British Telecom employees turned up outside a house in Westminster and started digging up the road. They were installing telephone lines, 40 of them, to equip Michael Portillo's cam- paign HQ. There was no Portillo campaign, so the lines were never needed. Nor had Mr Portillo known about their installation; it had been Mr Hart's idea. Any adviser who had exposed Margaret Thatcher to unwel- come publicity in that way would have been an ex-adviser within seconds. But there seems no limit to Mr Portillo's tolerance of his friend's eccentricities.

In general, the leadership campaign was not a happy time for Mr Portillo. He was confronted with a difficult decision, which he had to take instantly: to stand as a candi- date, or to give the Prime Minister his full backing. For a few indecisive hours he did neither. He went to lunch with BBC journal- ists — not a sensible moment to be in such perilous company — and is said to have talked wildly about his political prospects.

The outcome of the whole affair was an undermined reputation. Some right-wingers deplored his lack of courage, while many left-wingers condemned his lack of loyalty.

But John Major, a generous man, closed his ears and promoted Mr Portillo to Defence. When -this was announced, a senior figure in No 10 said, 'At least he's got a real job now, with no time to plot.' There have indeed been signs of Mr Portillo's set- tling down to become a proper team player, but there have also been mistakes.

Last year, there was a brouhaha when the Government was searching for a new func- tion for the buildings at Greenwich. It seemed for a moment as if they might end up in unsuitable hands, and the Tories suf- fered some deserved political damage. One would have thought that lessons had been learned: not so. Admiralty Arch cannot be compared to Greenwich, but it is an impor- tant monument. Yet again, the Ministry of Defence managed to give the impression that it was keen to flog it off to any old buyer. The PM had to intervene to make it clear that this would not happen.

That would not have been necessary if Mr Portillo had been on the alert. Instead of wasting his time scrapping with Emma Nicholson, to her advantage rather than his, he should have been preventing a public relations fiasco. He was not, so it happened.

Michael Portillo is only 42. For all his mistakes, he has established a powerful position and could help to shape his Party's destinies for decades to come, per- haps as leader. But the doubts remain, and are growing. No politician could have risen so high so quickly without a quota of arro- gance and stubbornness. The question is whether he can control those qualities and meld them into a mature judgment, or whether they will destroy him. Over the next few years, the answering of that ques- tion will have a significant effect on the Tory Party's fortunes.