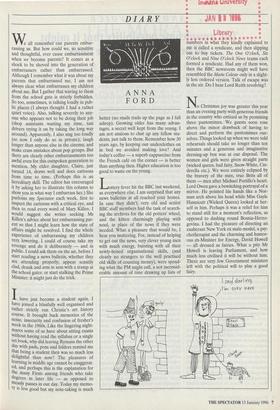 ANNA FORD We all remember our parents embar- rassing us. But how could we, so sensitive and thoughtful, ever cause embarrassment when we become parents? It comes as a shock to be shoved into the generation of embarrassers rather than embarrassed. Although I remember what it was about my parents that embarrassed me, I am not always clear what embarrasses my children about me. But I gather that waving to them from the school gate is strictly forbidden. So too, sometimes, is talking loudly in pub- lic places (I always thought I had a rather quiet voice). Also, talking severely to any- one who appears not to be doing their job (shop assistants wasting my time, taxi drivers flying it on by taking the long way around). Apparently, I also sing too loudly (so now I only do so in private); laugh longer than anyone else in the cinema; and make crass mistakes about pop groups. But there are clearly other embarrassments too awful even for this outspoken generation to mention. My elder daughter, Claire, just turned 14, draws well and does cartoons from time to time. (Perhaps this is an hereditary skill. The editor has encouraged it by asking her to illustrate this column to show you in what way I embarrass her.) She purloins my Spectator each week, first to inspect the cartoons with a critical eye, and then to read every word of Mary Killen. I would suggest she writes seeking Ms Killen's advice about her embarrassing par- ent so that I might learn how the state of affairs might be resolved. I find the whole experience of embarrassing my children very lowering. I could of course take my revenge and do it deliberately — and in public. I could ask them on the air, before I start reading a news bulletin, whether they are attending properly; appear scantily clad, drunk and arm in arm with a tramp at the school gates; or start stalking the Prime Minister: it might just do the trick.

Ihave just become a student again. I have joined a blissfully well organised and rather strictly run Christie's art history course. It brought back memories of the noise, insecurity and confusion of fresher's week in the 1960s. Like the lingering night- mares some of us have about sitting exams without having read the syllabus or a single set book, why did leaving Rymans the other day with pads, pens and folders remind me that being a student then was so much less delightful than now? The pleasures of learning in middle age cannot be exaggerat- ed, and perhaps this is the explanation for the many Firsts among friends who take degrees in later life — as opposed to measly passes in our day. Today my memo- ry is less good but my note-taking is much better (no snails trails up the page as I fall asleep). Growing older has many advan- tages, a secret well kept from the young. I am not anxious to chat up any fellow stu- dents, just talk to them. Remember how 30 years ago, by keeping our underclothes on in bed we avoided making love? And today's coffee — a superb cappuccino from the French café on the corner — is better than anything then. Higher education is too good to waste on the young.

Lottery fever hit the BBC last weekend, as everywhere else. I am surprised that any news bulletins at all reached your homes. In case they didn't, very old and senior BBC staff members had the task of search- ing the archives for the old potters' wheel, and the kitten charmingly playing with wool, in place of the news if they were needed. What a pleasure that would be, I hear you muttering. For, instead of helping to get out the news, very clever young men with much energy, bursting with all their newly-honed organisational skills, (and clearly no strangers to the well practised old skills of counting money), were spend- ing what the PM might call, a not inconsid- erable amount of time drawing up lists of

numbers in what they kindly explained to me is called a syndicate, and then slipping out to buy tickets. The One O'clock, Six O'clock and Nine O'clock News teams each formed a syndicate. Had any of them won, then the BBC newsroom might well have resembled the Marie Celeste only in a slight- ly less ordered version. Talk of escape was in the air. Do I hear Lord Reith revolving?

No Christmas joy was greater this year than an evening party with generous friends in the country who enticed us by promising three pantomimes. We guests soon rose above the minor drawback of having to direct and perform the pantomimes our- selves. Things looked up when we were told rehearsals should take no longer than ten minutes and a generous and imaginative dressing-up box was at our disposal. The women and girls were given straight parts (wicked queen, bad fairy, Snow-White, Cin- derella etc.). We were entirely eclipsed by the bravery of the men, true Brits all of them — men after Michael Portillo's heart. Lord Owen gave a bewitching portrayal of a mirror. He pointed his hands like a Nor- man arch above his head while Miss Gayle Hunnicutt (Wicked Queen) looked at her- self in him. Perhaps it was a relief for him to stand still for a moment's reflection, as opposed to dashing round Bosnia-Herzo- govina. I had the pleasure of directing an exuberant New York ex male-model, a psy- chotherapist and the charming and humor- ous ex-Minister for Energy, David Howell — all dressed as fairies. What a pity Mr Howell is leaving Parliament, and how much less civilised it will be without him. There are very few Government ministers left with the political will to play a good fairy.