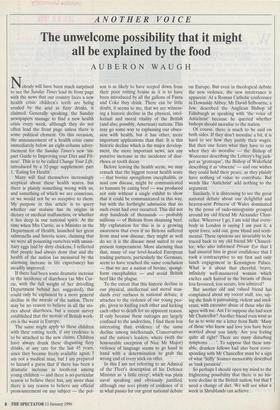 Many will find themselves increasingly sceptical about these health scares, but there is plainly something wrong with us, and something of which we are conscious, or we would not be so receptive to them. My purpose in this article is to query whether our malaise has its origins in dietary or medical malfunction, or whether it lies deep in our national spirit. At the time when Mrs Currie, as a Minister in the Department of Health, launched her great salmonella and listeria scare, claiming that we were all poisoning ourselves with unsan- itary eggs laid by dirty chickens, I reflected that people had always done that and the health of the nation (as measured by the alarming increase in life expectancy) has steadily improved.

If there had been some dramatic increase in the incidence of diarrhoea (as Mrs Cur- rie, with the full weight of her drivelling Department behind her, suggested), this could only be explained by a more general decline in the morale of the nation. There may be no reason to believe in all the sto- ries about diarrhoea, but a recent survey established that the morale of British work- ers is the worst in Europe.

The same might apply to these children with their rotting teeth, if any credence is to be attached to the new claims. Children have always drunk these disgusting fizzy drinks, at any rate for the last 45 years, since they became freely available again. I am not a medical man, but I am prepared to hazard a guess that if there has been a dramatic increase in tooth-rot among young children — and there is no particular reason to believe there has, any more than there is any reason to believe any official pronouncement on any subject — the poi- son is as likely to have seeped down from their poor rotting brains as it is to have been introduced by all the gallons of Fanta and Coke they drink. There can be little doubt, it seems to me, that we are witness- ing a historic decline in the physical, intel- lectual and moral vitality of the British (and also, possibly, American) nations. This may go some way to explaining our obses- sion with health, but it has other, more important applications than that. It is this historic decline which is the major develop- ment, the more important news, not any putative increase in the incidence of diar- rhoea or tooth decay.

Before leaving the health scene, we may remark that the biggest recent health scare — that bovine spongiform encephalitis, or mad cow disease, might be communicated to humans by eating beef — was produced not only without a single exhibit to show that it could be communicated in this way, but with the forthright admission that no such event had ever occurred. This did not stop hundreds of thousands — probably millions — of Britons from shunning beef. My explanation for this is in a growing awareness that even if no Britons suffered from mad cow disease, they might as well do so: it is the disease most suited to our present temperament. More alarming than that, many of our level-headed European trading partners, particularly the Germans, seem to have reached the same conclusion — that we are a nation of bovine, spongi- form encephalitics — and avoid British beef like the plague.

To the extent that this historic decline in our physical, intellectual and moral stan- dards ever surfaces in national debate, it attaches to the violence of our young peo- ple, given to knifing each other and kicking each other to death for no apparent reason. If only because these outrages are largely confined to the underclass, I find them less interesting than evidence of the same decline among intellectuals, Conservatives and the nation's leaders, where (with the honourable exception of Nice Mr Major) violence of language seems to go hand in hand with a determination to grab the wrong end of every stick on offer.

In this I am not referring to an Admiral of the Fleet's description of his Defence Minister as 'a little creep', which was plain naval speaking and obviously justified, although one sees plenty of evidence of it in what passes for our great national debate on Europe. But even in theological debate the new violence, the new intolerance is apparent. At a Roman Catholic conference in Downside Abbey, Mr David Selbourne, a Jew, described the Anglican Bishop of Edinburgh as speaking with 'the voice of Antichrist' because he queried whether bishops should moralise to the nation.

Of course, there is much to be said on both sides. If they don't moralise a bit, it is hard to see how they justify their wages. But then one hears what they have to say when they do moralise — the Bishop of Worcester describing the Lottery's big jack- pot as 'grotesque', the Bishop of Wakefield describing it as 'obscene' — and one wishes they could hold their peace, as they plainly have nothing of value to contribute. But words like 'Antichrist' add nothing to the argument.

Similarly, it is distressing to see the great national debate about our delightful and heaven-sent Princess of Wales dominated by the posse of sado-misogynists grouped around my old friend Mr Alexander Chan- cellor. Wherever I go, I am told that every- body in London is saying I am past it, a spent force, sold out, gone bland and senti- mental. These opinions are invariably to be traced back to my old friend Mr Chancel- lor, who also informed Private Eye that I had assured him in great confidence that I took a contraceptive to my first and only lunch engagement in Kensington Palace. What is it about that cheerful, brave, infinitely well-mannered woman which excites such hatred in the breasts of those less favoured, less secure, less admired?

But another old and valued friend has complained about my recent stuff, too, say- ing she finds it patronising, violent and intol- erant, with excessive abuse of those who dis- agree with me. Am Ito suppose she had seen Mr Chancellor? Another friend even went so far as to write me a letter from Bath: 'Many of those who know and love you have been worried about you lately. Are you feeling quite all right? There are many disturbing symptoms . . . '. To suppose that these ami- able, drunken fellows had also been corre- sponding with Mr Chancellor must be a sign of what `Stiffy' Soames memorably described as 'rank paranoia'.

So perhaps I should open my mind to the frightening possibility that there is no his- toric decline in the British nation, but that I need a change of diet. We will see what a week in Shmblands can achieve.