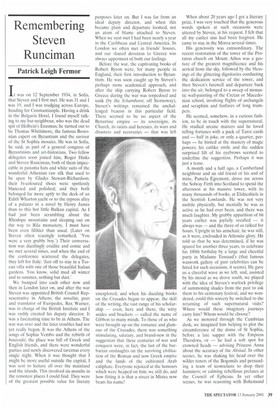 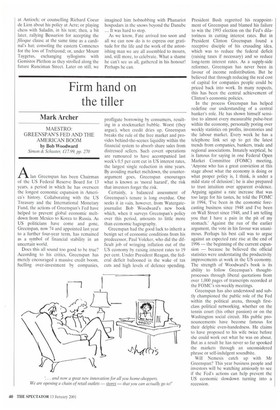 It was on 12 September 1934, in Sofia, that Steven and I first met. He was 31 and I was 19, and I was trudging across Europe, heading for Constantinople. Having a drink in the Bulgaria Hotel, 1 found myself talking to my bar-neighbour, who was the dead spit of Holbein's Erasmus; he turned out to be Thomas Whittimore, the famous Bostonian expert on Byzantium and the saviour of the St Sophia mosaics. He was in Sofia, he said, as part of a general congress of Byzantinists and art-historians. Two fellow delegates soon joined him, Roger Hinks and Steven Runciman, both of them impeccable in panama hats and white suits of the wonderful Athenian raw silk that used to be spun by Gladys Stewart-Richardson; their bi-coloured shoes were spotlessly blancoed and polished; and they both belonged far more aptly to the deck of an Edith Wharton yacht or to the cypress alley of a palazzo in a novel by Henry James than to this hot little Balkan capital. As I had just been scrambling about the Rhodope mountains and sleeping out on the way to Rila monastery, I must have been even filthier than usual. (Later on Steven often teasingly remarked, 'You were a very grubby boy.') Their conversation was dazzlingly erudite and comic and we met several times, and when the end of the conference scattered the delegates, they left for Italy: 'Just off to stay in a Tuscan villa with one of those beautiful Italian gardens. You know, solid mud all winter and in summer, nothing but dust.'

We bumped into each other now and then in London later on, and after the war Steven was appointed British Council Representative in Athens; the novelist, poet and translator of Euripedes, Rex Warner, was in charge of the British Institute and I was rashly created his deputy director. It was a fascinating time to be in Athens. The war was over and the later troubles had not yet really begun. It was the Athens of the songs of Sophia Vembo and the rebirth of bouzottki; the place was full of Greek and English friends, and there were wonderful parties and newly discovered tavernas every single night. When it was thought that i might be more useful outside the capital. I was sent to lecture all over the mainland and the islands. This involved six months in the remotest places I could find. They were of the greatest possible value for literary purposes later on. But I was far from an ideal deputy director, and when this became plain and departure loomed, not an atom of blame attached to Steven. When we next met I had been nearly a year in the Caribbean and Central America. In London we often met in friends' houses, and our shared devotion to Greece was always uppermost of both our feelings.

Before the war, the captivating books of Robert Byron were, for many people in England, their first introduction to Byzantium. He was soon caught up by Steven's perhaps more academical approach, and after the ship carrying Robert Byron to Greece during the war was torpedoed and sunk (by the Scharnhorst, off Stornoway), Steven's writings remained the unchallenged beacon in this particular field. There seemed to be no aspect of the Byzantine empire — its sovereigns, its Church, its saints and heresies, its wars and disasters and recoveries — that was left unexplored; and when his dazzling books on the Crusades began to appear, the skill of the writing, the vast range of his scholarship — even, here and there, the witty asides and brackets — called the name of Gibbon to many minds. To those of us who were brought up on the romance and glamour of the Crusades, there was something stimulating, salutary, and brand-new in the suggestion that these centuries of war and conquest were, in fact, the last of the barbarian onslaughts on the surviving civilisation of the Roman and now Greek empire and the lands of the cultivated Arab caliphate, Everyone rejoiced at the honours which were heaped on him; we still do, and how fitting it is that a street in Mistra now bears his name? When about 20 years ago I got a literary prize. I was very touched that the generous words spoken at such occasions were uttered by Steven, at his request. I felt that all my earlier sins had been forgiven. He came to stay in the Morea several times.

His generosity was extraordinary. The recent restoration of the tower of the Protaton church on Mount Athos was a gesture of the greatest magnificence and his arrival from the sky, followed by the blessings of the glittering dignitaries conducting the dedication service of the tower, and then Steven's farewell and departure back into the air, belonged to a sweep of monastic wall-painting of the Cretan or Macedonian school, involving flights of archangels and seraphim and fanfares of long trumpets.

He seemed, somehow, in a curious fashion, to be in touch with the supernatural. He studied arcane matters and he loved telling fortunes with a pack of Tarot cards and — half in joke, or only a quarter, perhaps — he hinted at the mastery of magic powers; his catlike smile and the sudden surprised lift of his eyebrows seemed to underline the suggestion. Perhaps it was just a tease.

A month and a half ago, a Cumberland neighbour and an old friend of his and of mine, Pamela Egremont, drove me across the Solway Firth into Scotland to spend the afternoon at his massive tower, with its many thousands of books, at Elshieshiels in the Scottish Lowlands. He was not very mobile physically, but mentally he was as active as he had ever been, and there was much laughter. My grubby apparition of 66 years earlier was joyfully recalled — it always was — and the three of us talked for hours. Upright in his armchair, he was still, as it were, enclouded in Athonite glory. He told us that he was determined, if he was spared for another three years, to celebrate his 100th birthday by a large and cheerful party in Madame Tussaud's (that famous waxwork gallery of past celebrities can be hired for such occasions, it seems). He gave us a cheerful wave as we left, and, assisted by his mood as we drove south, we played with the idea of Steven's warlock privilege of summoning shades from the past to ask them to his centenary festival, and we wondered, could this sorcery be switched to the returning of such supernatural visits? Where would these imaginary journeys carry him? Whom would he choose?

As we motored through the Cumbrian dusk, we imagined him helping to plot the circumference of the dome of St Sophia, before a late supper with the Empress Theodora, or — he had a soft spot for crowned heads — advising Princess Anna about the accuracy of the Alexia& in other scenes, he was shaking his head over the wilder tenets of the Bogomils and persuading a team of iconoclasts to drop their hammers; or calming rebellious prelates at the Council of Ephesus. In yet other scenes, he was reasoning with Bohemond at Antioch; or counselling Richard Coeur de Lion about his policy at Acre; or playing chess with Saladin, in his tent; then, a bit later, rallying Bessarion for accepting the filioque clause at the same time as a cardinal's hat; consoling the eastern Comnenes for the loss of Trebizond; or, under Mount Taygetus, exchanging syllogisms with Gemistos Plethon as they strolled along the future Runciman Street. Later on still, we imagined him hobnobbing with Phanariot hospodars in the snows beyond the Danube ... It was hard to stop.

As we know, Fate arrived too soon and all we can now do is to express our gratitude for the life and the work of the astonishing man we are all assembled to mourn, and, still more, to celebrate. What a shame he can't see us all, gathered in his honour! Perhaps he can. President Bush regretted his reappointment of Greenspan and blamed his failure to win the 1993 election on the Fed's dilatoriness in cutting interest rates. But in President Clinton Greenspan found a receptive disciple of his crusading idea, which was to reduce the federal deficit (raising taxes if necessary) and so reduce long-term interest rates. As a supply-side reformer, Greenspan has never been in favour of income redistribution. But he believed that through reducing the real cost of capital for companies people could be priced back into work. In many respects, this has been the central achievement of Clinton's economic policies.

In the process Greenspan has helped redefine our understanding of a central banker's role. He has shown himself sensitive to almost every measurable pulse-beat within the economy, personally poring over weekly statistics on profits, inventories and the labour market. Every week he has a telephone link set up to get the latest trends from companies, bankers, trade and regional associations. Innately sceptical, he is famous for saying in one Federal Open Market Committee (FOMC) meeting, 'Anyone who has a great conviction at this stage about what the economy is doing or what proper policy is, I think, is under a mild state of delusion'; he is also prepared to trust intuition over apparent evidence. Arguing against a rate increase that was too large for his tastes, he told the FOMC in 1994, 'I've been in the economic forecasting business since 1948 and I've been on Wall Street since 1948, and I am telling you that I have a pain in the pit of my stomach.' Against the run of the earlier argument, the vote in his favour was unanimous. Perhaps his best call was to argue against an expected rate rise at the end of 1996— the beginning of the current expansion — because he believed the official statistics were understating the productivity improvements at work in the US economy. The strength of Woodward's book is its ability to follow Greenspan's thoughtprocesses through liberal quotations from over 1,000 pages of transcripts recorded at the FOMC's six-weekly meetings.

Greenspan has also understood and subtly championed the public role of the Fed within the political arena, through firstclass political networking, whether on the tennis court (his other passion) or on the Washington social circuit. His public pronouncements have become famous for their delphic even-handedness. He claims to have proposed to his wife twice before she could work out what he was on about. But as a result he has never so far spooked the markets through an unconsidered phrase or self-indulgent soundbite.

Will Nemesis catch up with Mr Greenspan? This year business people and investors will be watching anxiously to see if the Fed's actions can help prevent the US economic slowdown turning into a recession.