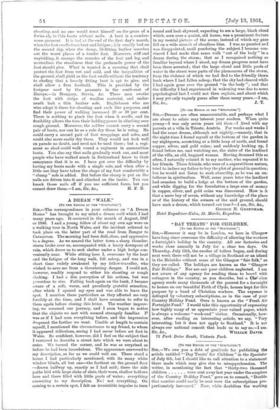 [To THE EDITOR OF THE "SPECTATOR."] SIR, — Dreams are often unaccountable,

and perhaps what I am about to relate may interest your readers. When quite young—I was only seven years old then—I lived with my parents at a villa in Trieste, Austria. For weeks and weeks I had the same dream, although not nightly,—namely, that in the night-time I found myself at the bottom of the garden in my nightgown, scratching at a little heap of earth, and found copper, silver, and gold coins; and suddenly looking up, I found before me, and watching me, the sister of the landlord of the villa, an old, haggard woman. Having dreamed this so often, I naturally related it to my mother, who repeated it to her friends. These friends, who were of a superstitious nature, tried to induce my father to buy the plot of ground in question; but he would not listen to such absurdity, as he was an us- believer in spiritualism. Well, some years later the landlord bad occasion to build a lodge at the bottom of the garden, and while digging for the foundation a large sum of money in copper, silver, and gold coins was discovered. How is it that a mere boy of seven, without any knowledge of the place or of the history of the owners of the said ground, should have such a dream, which turned out true P—I am, Sir, &c., GEORGE H. GREENHAlt.