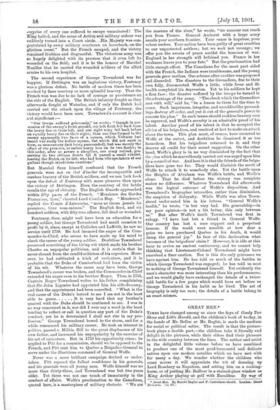 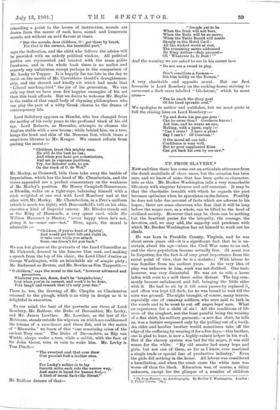 TIMES have changed among us since the days of Goody Two Shoes and Little Harold, and the children's book of to-day, in the hands of Mr. Belloc or Mr. Begbie, is made the medium for social or political satire. The result is that the picture. book plays a double part,—the children take it literally and delight in the pictures, while their elders find their pleasure in the wide country between the lines. The author and artist in the delightful little volume before us have combined to produce one of the most good-humoured and delicate satires upon our modern notables which we have met with for many a day. We wonder whether the children who come across it will appreciate the wit of dressing up Lord Rosebery as Napoleon, and setting him on a rocking- horse, or of putting Mr. Balfour in a stained-glass window as Sing Arthur playing ,at golf with Excalibur. By way of • Great Mm. Bx Harold Begbie and F. Carruthers Gould. London ; Oxsat gicbards. (3s. ed.1

conceding a point to the lovers of instruction, morals are drawn from the career of each hero, sound and humorous morals, not without an acid flavour at times.

"But the morals, dear children, 0! get them by heart, For that is the earnest, the beautiful part," says the dedication, and the child who follows the advice will be provided with an unholy political wisdom. All political parties are represented and treated with the same polite frankness, and in the whole book there is no malice and scarcely any unfairness, except perhaps in the comparison of Mr. Lecky to Tupper. It is happily far too late in the day to insist on the merits of Mr. carruthers Gould's draughtsman- ship, and the shrewd and kindly wit which had made that "Liberal mocking-bird" the joy of his generation. We can only say that we have seen few happier examples of his art than this book affords. But we desire to welcome Mr. Begbie to the ranks of that small body of rhyming philosophers who can play the part of a witty Greek chorus to the drama of contemporary life.

Lord Salisbury appears as Hamlet, who has changed from the motley of his early years to the profound black of his old age. Lord Roberts, as Hercules, attempts to cleanse the Augean stable with a new broom; while behind him, on a tree, hangs the head and skin of the Nemes,n lion, which bears a suspicious likeness to Mr. Kruger. We cannot refrain from quoting the moral :— " Children, trust this mighty man, He will do the best he can; And when you have got commissions, And are in supreme positions, Try, for Roberts' sake, to get On the track of C. de Wet.'

Mr. Morley, as Cromwell, bids them take away the bauble of Imperialism, which has the head of Mr. Chamberlain, and the verses appended are a perfect commentary on the weakness of Mr. Morley's position. Sir Henry Campbell-Bannerman, as Blondin, walks on a tight-rope, balancing himself with a stick weighted at one end with Lord Rosebery and at the other with Mr. Morley. Mr. Chamberlain, in a Peer's uniform (which is much too tight), with Beaconsfield's tuft on his chin, executes a kind of Imperial cancan. Mr. Rhodes stands out as the King of Diamonds, a very queer card, while Sir William Harcourt is Hector, "never happy when he's not, giving it to—some one—hot." Here, again, the moral is admirable :— " Children, if you're fond of fightin', And would get both left and right in, 0 take care while you attack Some one doesn't hit you back."

We can but glance at the portraits of the Lord Chancellor as Mr. Pickwick, dressed in the famous blue coat, and making a speech from the top of his chair; the Lord Chief Justice as George Washington, with an inimitable air of simple piety ; Mr. Redmond as Brutus, and Mr. Bowles as Sim Tappertit "0 children," says the moral to the last, "however advanced and precocious, Whatever you are, dears, don't be bragadocions,' Lest when you're in earnest, and work's to be done, Folk laugh and remark that it's only your fun."

There is, too, the drawing of Mr. Chaplin as Cincinnatus returned to the plough, which is as witty in design as it is delightful in execution.

To our mind, the best of the portraits are those of Lord Rosebery, Mr. Balfour, the Duke of Devonshire, Mr. Lecky, and Mr. James Lowther. Mr. Lowther, as the last of the Mohicans, stands outside his wigwam on which are emblazoned the totems of a race-horse and three fish, and in the metre of " Hiawatha " we learn of this "one remaining scion of the ascient Tory race." The Duke of Devonshire, as Rip van Winkle, sleeps under a tree, while a rabbit, with the face of

For Lecky's metier is to lay Smooth miles each side the narrow way, ' And make it broad for human feet,— A kind of moral Sackville Street."

Mr. Balfour dreams of that- " Decade yet to be When the Irish will not bore, When the Rads. will be no more; When the Table Round will nestle Snugly in the Hotel Cecil : All the wicked world at rest, The remaining saints addressed By King Arthur—duly pressed— Oh Whatever Is, Is Best !

And the warning we are asked to see in his career is- " Do not use a sword in play.

Don't conciliate a foeman- Hit him boldly on the Homan."

A very charitable and apposite moral. But our first favourite is Lord Rosebery on the rocking-horse, striving to surmount a dark mass labelled "Gladstone," which he must cross—

"Ere he reach the dizzy goal Of his tired sporadic souL" We apologise to author and publisher, but we must quote in full the closing lines on Lord Rosebery :— "Up and down his gee-gee goes ! Can he cross thus ? Goodness knows !

0 the moral all can tell : Confidence is very well, But no poor supplanted Esau Can get back his own by see-saw."