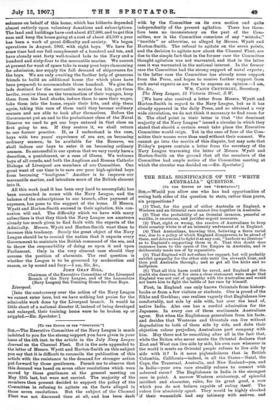 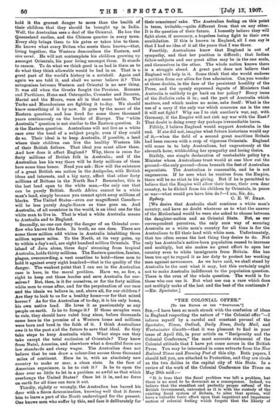 THE REAL SIGNIFICANCE OF THE " WHITE AUSTRALIA" QUESTION.

[TO TUN EDITOR OP THE " sraorArort."] SIB, Would you allow one who has had opportunities of seeing both sides of the question to state, rather than prove, six propositions ?

(1) That, for the good of either Australia or England, a Western and an Oriental race cannot live together in Australia.

(2) That the probability of an Oriental invasion, peaceful or warlike, is enormous, and justifies urgent measures.

(8) That, right or wrong, the resolve of Australians to keep their country white is of an intensity undreamed of in England.

(4) That Australians, knowing this, believing a fierce racial war, due to a policy of which England disapproves, to be ahead of them, and determined to fight it at any cost, " harbour no illusions" as to England's supporting them in it. That this doubt does immense harm to the cause of the Empire in Australia, and is deliberately made use of by separatists.

(5) That England will not refuse her support, but will probably exhibit sympathy for the other aide until the eleventh hour, and then pull Australia through ; and so get all the kicks and no halfpence.

(6) That all this harm could be saved, and England get the credit she deserves, if for once a clear statement were made that England was not out of sympathy with the Australian and would not leave him to fight the battle of her race by himself.

First, in England one only knows Orientals from history- books or from a few visitors or students. One is proud of the Sikhs and Gurkhas; one realises vaguely that Englishmen live comfortably, not side by side with, but over the head of, native India. Also one has a cordial admiration for the Japanese. In every one of these sentiments Australians agree. But when the Englishman generalises from his facts, and decides that Westerns and Orientals can live without degradation to both of them side by side, and dubs their objection colour prejudice, Australians part company with him. May there not be something after all in the fact that, while the Briton who never meets the Oriental declares that East and West can live side by aide, his own race wherever in the world it meets an Oriental people refuses to live side by side with it ? Is it mere pigheadedness that. in British Columbia, California—indeed, in all the States—Natal, the Cape, the Transvaal, Australia, and New Zealand—yes, and in India—your own race steadily refuses to consort with coloured races ? The Englishman in India is the strongest case in point. A narrow Western aristocracy, of splendid

intellect and character, rules, for He great good, a race which you do not believe capable of ruling itself. The rulers live absolutely apart. They would be highly shocked if their womenfolk had any intimacy with natives, and hold it the gravest danger to more than the health of their children that they should be brought up in India. Well, the Australian sees a deal of the Oriental. He has the Queensland coolies, and the Chinese quarter in every town. Every ship brings them to his gates or takes him to them. He knows what every Briton who meets them knows,—that, living together, the Western demoralises the Eastern, and vice venni. He will not contemplate his children growing up amongst Orientals, his poor living amongst them. It stands to reason. To do what we think good is as bad in them as to do what they think allowable would be bad in us. That is a great part of the world's history in a nutshell. Again and again we are told it, and shall we never believe it P This antagonism between Western and Oriental is no new thing. It was old when the Greeks fought the Persians. Romans and Parthians, Huns and Ostrogoths, Crusader and Saracen, Martel and the Moors, were all in that same battle. The Turks and Macedonians are fighting it to-day. We should know something of it by now. It goes by the name of the Eastern question, and has lived for some three thousand years continuously on the border of Europe. The "white Australia" question is not similar to the Eastern question. It .18 the Eastern question. Australians will not live as a white race over the head of a subject people, even if they could do so. Their ideal is to keep Australia, if possible, a land where their children can live the healthy Western life of their British fathers. That ideal you must allow them. And bow does it affect England ? Why, there is room for forty millions of British folk in Australia; and if the Australian has his way there will be forty millions of them here some time hence. Need you ask : How will the existence of a great British sea nation in the Antipodes, with British ideas and interests, and a big navy, affect that other forty millions of Britons in the North Sea ? Remember, this is the last land open to the white man,—the only one that can be purely British. South Africa cannot be a white man's land, simply because you cannot spirit away millions of blacks. The United States—even our magnificent Canada— will be less purely Anglo-Saxon as time goes on. And Australia, of all countries in the world, is an ideal one for the white man to live in. That is what a white Australia means to Australia and to England.

Secondly, no one can deny the danger of an Oriental over- flow who knows the facts. In truth, no one does. There are some three million odd whites in Australia inhabiting three million square miles. To the North, at its very gates, up to within a day's sail, are eight hundred million Orientals. The island of Java alone, three days' steaming from tropical Australia, holds thirty millions. The Eastern question, famine, plague, overcrowding, a vast coastline to hold—three men to hold it against every eight hundred—that is the quality of the danger. The weakest point that I can see in the Australian case is here, in the • moral problem. Have we, so few, a right to keep out those hordes and save Australia for our- selves P But, then, is it for ourselves, or for the forty million white men to come after, and for the perpetuation of our race -and the ideals we believe in, and, above all, for our children ? Are they to look to us for a healthy home—or for that mixed -horror P As for the Australian of to-day, it is his only home, his own native land. He loves it as passionately as any people on earth. Is he to forego it P If those scruples were to rule, they should have ruled long since, before thousands came here in the promise of a Western home and millions were born and bred in the faith of it. I think Australians owe it to the past aid the future to save that ideal. So they take steps to keep Australia white. What steps can they take except the total exclusion of Orientals ? They know from Natal, America, and elsewhere what a dreadful force are low standards and cheap wages. The Australian does not believe that be can draw a colour-line across three thousand miles of continent. Here he is, with an absolutely new country to make or mar, a clean slate. In the face of American experience, is be to risk it ? Is he to open the door ever so little to let in a problem so awful as that which overhangs the United States? Once let it in, and no force on earth for all time can turn it out.

Thirdly, rightly or wrongly, the Australian has barred his door with a fierce determination, knowing well that it forces him to leave a part of the North undeveloped for the present. One knows men who suffer by this, and face it deliberately for

their conscience' sake. The Australian feeling on this point is tense, irritable,—quite different from that on any other. It is the question of their future. I honestly believe they will fight alone, if necessary, a hopeless losing fight to their own annihilation. If this is known in England, all I can say is that I had no idea of it all the years that I was there.

Fourthly, Australians know that England is out of sympathy, and that her position is difficult; that Indian fellow-subjects and our great allies may be in the one scale, and themselves in the other. The whole nation knows there is a struggle ahead. A great part does not believe that England will help in it. Some think that she would endorse a petition from our allies for free admission. Can you wonder at these doubts, in the face of the persistent hostility of the Press, and the openly expressed regrets of Ministers that Australia is unlikely to go back on her policy? Every issue of the Bulletin rubs it in ; and the part of Australia which matters, and which makes no noise, asks itself : What is the use of a navy if the only war which concerns me is the one it will not fight ? Why am I to risk another's war, say, with Germany, if the Empire will not risk my war with the East P That doubt is doing every day perhaps irremediable harm.

Fifthly, I believe England would support Australia in the end. If she did not, imagine what future historians would say of it,—when the field of a second great maritime Britain had been resown with a crop of vigorous Orientals. England will come in to help Australians, but ungraciously at the eleventh hour, withholding her sympathy and losing theirs.

Sixthly, one simple declaration of unshakable policy by a Minister whom Australians trust would at one blow cut the ground—the only ground—from beneath the feet of Australian separatists. The Australian is reasonable, and he is not ungenerous. If he sees what he receives from the Empire, there will be no stint in his giving. But if he is permitted to believe that the Empire will allow their home, their own dear country, to be filched from his children by Orientals, in peace or war—what would you have him do ?—I am, Sir, &c.,

[We desire that Australia shall continue a white man's country, and have no doubt whatever as to what the answer of the Motherland would be were she asked to choose between the daughter-nation and an Oriental State. But, as our correspondent perceives, the only sure way of securing Australia as a white man's country for all time is for the Australians to fill their land with white men. Unfortunately, that too often seems the last thing they desire to do. Not only has Australia's native-born population ceased to increase and multiply, but she makes no great effort to open her country even to white immigrants from Britain. She has been too apt to regard it as her duty to protect her working men against newcomers. As we have said, we shall stand by Australia be the cost what it may, but this certainly ought not to make Australia indifferent to the population question. There is the crux of the whole question. The world is for those who can use it. But what use can a race which does not multiply make of the last and the best of the continents ? —En. Spectator.]