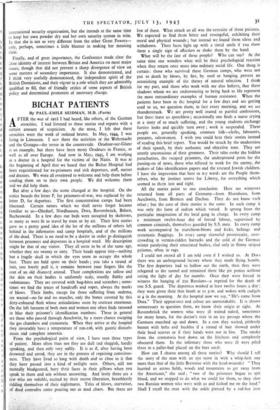 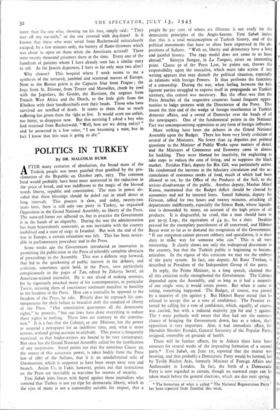 AFTER the war of 1918 I had heard, like others, of the German atrocities. I had listened to these stories and reports with a certain amount of scepticism. At the most, I felt that these atrocities were the work of isolated brutes. In May, 1944, I was living in Limousin. I saw there the activities of the Wehrmacht and the Gestapo—the terror in the countryside. Oradour-sur-Glane is an example, but there have been many Oradours in France, as well as all over Europe. And now in May 1945, I am working as a doctor in a hospital for the victims of the Nazis. It was at the beginning of April that we heard that the Bichat Hospital had been requisitioned for ex-prisoners and sick deportees, staff, nurses and doctors. We were all overjoyed to welcome and help them before sending them on to their own people. We did welcome them and we did help them.

But after a few days the scene changed at the hospital. On the notice boards the letter P, for prisoners-of-war, was replaced by the letter D, for deportees. The first concentration camps had been liberated. Certain names which we shall never forget became familiar to us—Ohrdurf, Nordhausen, Dora, Ravensbriick, Belsen, Buchenwald. In a few days our beds were occupied by skeletons, as many as were fit to travel by train or by air. Their first stories gave us a pretty good idea of the lot of the millions of others left behind in the infirmaries and camp hospitals, and of the millions of the dead. There is no need to be a doctor in order to distinguish between prisoners and deportees in a hospital ward. My description might be that of any visitor. They all seem to be of the same age, whether they are twenty or sixty. Their heads appear tiny—nothing but a fragile skull in which the eyes seem .to occupy the whole face. There are bald spots on their heads ; you take a strand of hair, you barely pull it, it remains between your fingers like the coat of an old diseased animal. Their complexions are sallow and the skin on their bodies is uniformly scaly, usually flabby and oedematous. They are covered with bug-bites and scratches ; some- times we find the traces of handcuffs and ropes, always the marks of blows. Their limbs, except for those suffering from oedema, are wasted—no fat and no muscles, only the bones covered by this dirty-coloured flesh whose articulations seem by contrast enormous. On the left forearm of both men and women one often finds tattooed in blue their prisoner's identification numbers. These in general are those who passed through Auschwitz, by a mere chance escaping the gas chambers and crematoria. When they arrive at the hospital they invariably have a temperature of too-to6, with gastric disturb- ances and complete anorexia.

From the psychological point of view, I have seen three types of patient. More often than not they are dull and sluggish, hardly speaking, and then only very softly. It is as if, after having been drowned and saved, they are in the process of regaining conscious- ness. They have lived so long with death and so close to it that they have passed into a kind of twilight state. Others, still too mentally bludgeoned, bury their faces in their pillows when you speak to them and sob without answering. And lastly there are a few who are voluble, excited by their recent liberation, breathlessly ridding themselves of their nightmares. Tales of blows, starvation, of dead comrades come pouring out in mad chaos. But there are few of these. What struck us all was the restraint of these patients. We expected to find them bitter and revengeful, exhibiting their moral and physical wounds ; but instead we found 'them silent and withdrawn. Their faces light up with a timid smile if you show them a single sign of affection or shake them by the hand.

What will be the fate of these people? Who can say? At the same time one wonders what will be their psychological reaction when they return once more into ordinary social life. One thing is certain: those who survived these German camps, who were not put to death by blows, by fire, by steel or hanging, present an astonishing example of the theory of natural selection. I think for my part, and those who work with me also believe, that these shadows whom we are endeavouring to bring back to life represent the most extraordinary examples of human resistance. When the patients have been in the hospital for a few days and are getting used to us, we question them, in fact every morning, and we ate thunderstruck. We arc pretty well inured to painful confessions, but these leave us speechless ; occasionally one finds a nurse crying at a story of so much suffering, and the young students exchange furtive looks and quickly turn away ; work is suspended. These people are, generally speaking, common folk--clerks, labourers, peasants, saleswomen. I wish you could hear their stories instead of reading this brief report. You would be struck by the moderation of their speech, by their authentic and objective tone. They are utterly unconscious of their greatness. Their tales evoke the hidden parachutists, the escaped prisoners, the underground posts for the passing-on of news, those who refused to work for the enemy, the makers of fake identification papers and the rescued Jewish children. I have the impression that here in my wards are the People them- selves, who by instinct strove for Liberty, for everything which seemed to thzrn lust and right.

All the stories point to one conclusion. Here are witnesses returned from all parts of Germany—from Mannheim, from Auschwitz, from Bremen and Dachau. They do not know each other ; but the core of their stories is the same. In each camp it was only the form of sadism which varied. It sprang from the particular imagination of the local gang in charge. In every camp a minimum twelve-hour day of forced labour, supervised by common criminals, themselves guarded by S.S. men. In every camp work accompanied by truncheon-blows and kicks, beltings and systematic floggings. In every camp shameful promiscuity, over- crowding in vermin-ridden barracks and the cold of the German winter paralysing their emaciated bodies, clad only in flimsy striped pyjamas, often in rags.

I could not record all I am told even if I wished to. At Dora there was an underground factory where they made flying bombs. The first deportees had to hollow out the earth, then they were relegated to the tunnel and remained there like pit ponies without seeing the light of day for months. Once they were forced to witness the hanging of 25o Russians—a reprisal for the death of one S.S. guard. The deportees worked at least twelve hours a day ; they were given their thin broth at It p.m. and woken with cudgels at 4 in the morning. At the hospital now we say, " He's come from Dora." Their appearance and colour are unmistakable. It is almost unnecessary to question them, we know their origin at sight. At Ravensbriick the women who were ill waited naked, sometimes for many hours, for the doctor's visit in an icy passage where the Germans marched up and down. In a row they waited, pitilessly beaten with belts and buckles if a strand of hair showed under their head scarves or if their hands were not in line. The smoke from the crematoria beat down on the kitchens and completely obscured them. In the infirmary those who were ill were piled three to a pallet-bed placed on the bare earth.

How can I choose among all these stories? Why should I tell the story of the man with an eye stove in with a whip-lash any more than that of the little Bretonne with the head-wounds? " They hurried us across fields, woods and mountains to get away from the Americans," she said ; " two of the prisoners began to spit blood, and we stopped to do what we could for them, so they shot two Russian women who were with us and kicked me on the head." Shall I recall the man with the ankle pierced by a red-hot iron

more than the one who, showing me his toes, simply said: " They tore off my toe-nails," or the one covered with dog-bites? Is it known that these who were saved from Buchenwald miraculously escaped, by a few minutes only, the battery of flame-throwers which was about to open on them when the Americans arrived? There were twenty thousand prisoners there at the time. Every one of the hundreds of patients whom I have already seen has a similar story to tell. As for Jewish deportees, I have so far only seen two alive!

Why choose? This hospital where I work seems to me a synthesis of the tortured, jumbled and scattered masses of Europe. Next to the Breton priest is the Capucin friar from Prague ; the boys from St. Etienne, from Troyes and Marseilles, cheek by jowl with the Jugoslays, the Greeks, the Russians, the negroes from French West Africa and the Dutch, to the little girls from the Kholkoz with their handkerchiefs over their heads. Those who have survived are terrified of death. It seems to them that so much suffering has given them the -ight to live. It would seem too unfair, too bitter, to disappear now. But this morning asked a boy who had returned from Buchenwald, " Well, how are we doing today? " and he answered in a low voice, " I am becoming a man, but in fact I know that this man is going to die."