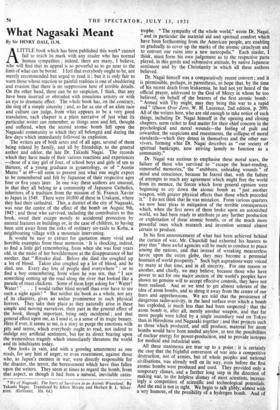 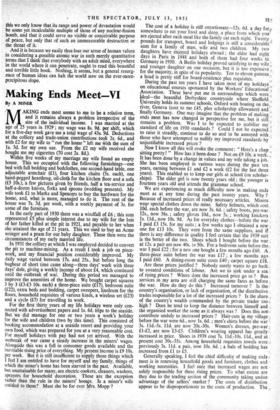 ALITTLE book which has been published this weeks cannot fail to reach its mark with any reader who has normal human sympathies ; indeed, there are many, I believe, who will find that its appeal is so powerful as to go near to the limit of what can be borne. I feel that everybody ought to be, not merely recommended but urged to read it ; but it is only fair to warn those whose reaction to painful realities is one of shuddering and evasion that there is no suppression here of terrible details. On the other hand, there can be no suspicion, I think, that any have been inserted or obtruded with conscious artistry or with an eye to dramatic effect. The whole book has, on thZ contrary, the ring of a simple sincerity ; and, so far as one of an alien race and culture can judge, from what appears to be a very good translation, each chapter is a plain narrative of just what its particular writer can remember, as things seen and felt, thought and suffered, when the second atomic bomb fell upon the Nagasaki community to which they all belonged and during the few days which immediately followed its explosion. The writers are of both sexes and of all ages, several of them being related by family, and all by friendship, to the general author and editor, the late Dr. Takashi Nagai. The records which they have made of their various reactions and experiences —those of a tiny girl of four, of school boys and girls of ten to thirteen, of a young graduate in gynadcology, or of " Auntie Matsu " at 69—all seem to present just what one might expect to be remembered and felt by Japanese of, their respective ages four or five years later. In one way these authors are unusual, in that they all belong to a community of Japanese Catholics, inheritors of a tradition from the mission of St. Francis Xavier to Japan in 1549. There were 10,000 of these in Urakami, where they had their cathedral. This, a district of the city of Nagasaki, was near the centre of the effect of the bomb on August 9th, 1945 ; and those who survived, including the contributors to this book, owed their escape mostly to accidental protection by natural features or buildings or, in the case of children, to having been sent away from the risks of ordinary air-raids to Koba, a neighbouring village with a mountain intervening. It would be easy to extract for quotation many vivid and horrible examples from these memories. It is shocking, indeed, to find a little girl remembering, from when she was four years old, in the midst of her bewilderment at the disappearance of her mother, that " Ritsuko died. Before she died she coughed up a lot of blood. Takeo also coughed up a lot of blood, and he died, too. Every day lots of people died everywhere " ; or to find a boy remembering, from when he was ten, that " I saw something coming up the road along the river that looked like a parade of roast chickens. Some of them kept asking for ' Water! Water! ' . . . I would rather blind myself than ever have to see such a sight again! " -But neither the book as a whole, nor any of its chapters, gives an undue prominence to such physical . horrors. They take their place as they naturally arise in these simple and moving narratives, their part in the general effect of the book, though important, being only incidental ; and that general effect upon me, as I read it, is a sense of its tragic beauty. Here if ever, it seems to me, is a story to purge the emotions with pity and terror, which everybody ought to read, not indeed to indulge any artificial sentiment, but for its direct bearing upon the tremendous tragedy which immediately -threatens the world and its inhabitants today. One looks in vain, and with a growing amazement as one reads, for any hint of anger, or even resentment, against those who, as Japan's enemies in war, were directly responsible for the disaster, the terror, the bereavement which have thus fallen upon the writers. They seem at times to regard the bomb, from that aspect, as though it had been a natural, inevitable catas- * We of Nagasaki. The Story of Survivors in an Atomic Wasteland. By Takashi Nagai. Translated by Ichiro Shirato and Herbert B. L. Silver- man. (Gollancz. 10s. 6d.) trophe. "The sympathy of the whole world," wrote Dr. Nagai, " and in particular the material aid and spiritual comfort which have been forthcoming from the American people, are enabling us gradually to cover up the marks of the atomic cataclysm and to convert our ruins into a new metropolis." Each reader, I think, must form his own judgement as to the respective parts played, in this gentle and submissive attitude, by native Japanese sentiment and by the Christianity in which all these authors believed.

Dr. Nagai himself was a comparatively recent convert.; and it is permissible, perhaps, in parenthesis, to hope that, by the time of his recent death from leukaemia, he had not yet heard of the official prayer, addressed to the God of. Mercy in whom he too believed, on behalf of the bearers of the first atomic bomb: " Armed with Thy might, may they bring this war to a rapid end " (Dawn Over Zero, W. H. Laurence, 2nd edition, p. 209). All of the writers here, who are old enough to take notice of such things, including Dr. Nagai himself in the opening and closing chapters, seem rather to find matter for their chief concern in the psychological and moral wounds—the feeling of guilt and cowardice, the suspicions and resentments, the collapse of moral standards—which they detect in themselves and the other sur- vivors, forming what Dr. Nagai describes as "our society of spiritual bankrupts, now striving lamely to function as a community."

Dr. Nagai was anxious to emphasise these moral scars, the failure of those who survived to " escape the heart-rending, remorseful memories," the " stubborn, unhealing. wounds " of mind and conscience, because he feared that, with the failure of attempts to reach any agreement which might free the world from its menace, the forces which form general opinion were beginning to cry down the atomic bomb as " just another weapon, with greater physical effects than those which preceded it." I do not think that he was mistaken. From various quarters we now hear pleas in mitigation of the terrible consequences which, when the first news of them broke upon an astonished world, we had been ready to attribute ;o any further production or exploitation of these atomic bombs, or of the much more powerful ones which research and invention seemed almost certain to produce.

In his first announcement of what had been achieved behind the curtain of war, Mr. Churchill had exhorted his hearers to pray that " these awful agencies will be made to conduce to peace among .the nations, and that instead of wreaking measureless havoc upon the entire globe, they may_ become a perennial fountain of world prosperity." Such high aspirations-were voiced by many at that time, and in all sincerity. For one reason or another, and chiefly, we may believe, because those who have power to act for one major section of the world's peoples have shown no genuine will to accept effective controls, they have not been realised. And so we tend to get almost tolerant of the idea' of atom bombs, and to shrug it away from the centre of our fears and apprehensions. We are told that the persistence of dangerous radio-activity, in the land surface over which a bomb has exploded, is much less than had been suspected ; that the atom bomb is, after all, merely another weapon, and that far more people were killed by a single incendiary raid on Tokyo than in Hiroshima and Nagasaki together ; and that projects such as those which produced, and still produce, material for atom bombs would have been needed anyhow, to test the possibilities of nuclear energy for power-production, and to provide isotopes for medical and industrial uses.

All these statements are true up to a point ; it is certainly the case that the frightful conversion of war into a competitive destruction, not of armies, but of whole peoples and national civilisations, was already well on its way, even before the first atomic bombs were produced and used. They provided only a temporary climax, and a further long step in the direction of making war, to the helpless dismay of most scientists, increas- ingly a competition of scientific and technological potentials. And the end is not in sight. We begin to talk glibly, almost- with a wry humour, of the possibility of a hydrogen bomb. And of this we only know that its range and power of devastation would be some yet incalculable multiple of those of any nuclear-fission bomb, and that it could serve no visible or conceivable purpose of peace, but only that of such an immeasurable destruction or the threat of it.

And it is because we easily thus lose our sense of human values in considering a -possible atomic war in such merely quantitative terms that I think that everybody with an adult mind, everywhere in the world where it can penetrate, ought to read this beautiful and terrible little book. Nothing, it seems, but a general resurg- ence of human ideas can halt the world now on the ever-more- precipitous slope.