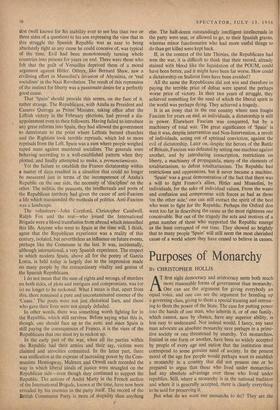 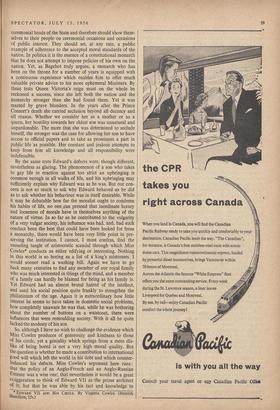 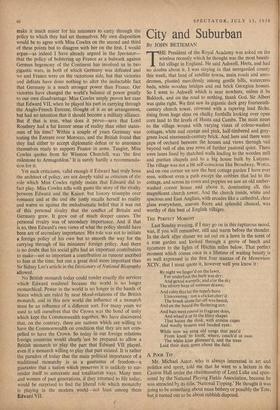 BY CHRISTOPHER HOLLIS ceremonial heads of the State and therefore should show them- selves to their people on ceremonial occasions and occasions of public interest. They should set, at any rate, a public example of adherence to the accepted moral standards of the nation. In politics it is the essence of a constitutional monarch that he does not attempt to impose policies of his own on the nation. Yet, as Bagehot truly argues, a monarch who has been on the throne for a number of years is equipped with a continuous experience which enables him to offer much valuable private advice to his more ephemeral Ministers. By these tests Queen Victoria's reign must on the whole be reckoned a success, since she left both the nation and the ;nonarchy stronger than she had found them. Yet it was marred by grave blunders. In the years after the Prince Consort's death she carried seclusion beyond all decency and all reason. Whether we consider her as a mother or as a queen, her hostility towards her eldest son was unnatural and unpardonable. The more that she was determined to seclude herself, the stronger was the case for allowing her son to have access to official papers and to take as prominent a part in public life as possible. Her constant and jealous attempts to keep from him all knOwledge and all responsibility were indefensible.

By the same tests Edward's defects were, though different, nevertheless as glaring. The phenomenon of a son who takes to gay life in reaction against too strict an upbringing is common enough in all walks of life, and his upbringing may sufficiently explain why Edward was as he was. But our con- cern is not so much to ask why Edward behaved as he did as to ask whether his behaviour was in itself desirable. While it may be debatable how far the moralist ought to condemn his habits of life, no one can pretend that inordinate luxury and looseness of morals have in themselves anything of the nature of virtue. In so far as he contributed to the vulgarity of a very vulgar society, his influence was bad, and, had such conduct been the best that could have been looked for from a monarchy, there would have been very little point in pre- serving the institution. I cannot, I must confess, find the unending tangle of aristocratic scandal through which Miss Cowles* conducts us either edifying or interesting. Nothing in this world is so boring as a list of a king's mistresses. I would sooner read a washing bill. Again we have to go back many centuries to find any member of our royal family Who was much interested in things of the mind, and a member of a family can hardly be blamed for being as his family is. Yet Edward had an almost brutal hatred of the intellect, and used his social position quite frankly to strengthen the Philistinism of the age. Again it is extraordinary how little interest he seems to have taken in domestic social problems, how completely unaware he was that, while he was bothering about the number of buttons on a waistcoat, there were Influences that were remoulding society. With it all he quite lacked the modesty of his son.

So, although I have no wish to challenge the evidence which Miss Cowles produces of generosity and kindness to those of his circle, yet a geniality which springs from a mere dis- like of being bored is not a very high moral quality. But the question is whether he made a contribution to international good will which left the world in his debt and which counter- balanced his defects. Miss Cowles's argument here runs : that the policy of an Anglo-French and an Anglo-Russian Entente was a wise one; that nevertheless it would be a great exaggeration to think of Edward VII as the prime architect of it; but that he was able by his tact and knowledge to s EDWARD VII AND HIS CIRCLE. By Virginia Cowles. (Hamish Hamilton, 25s.) make it much easier for his ministers to carry through the policy to which they had set themselves. My own disposition would be to agree with Miss Cowles on the second and third of these points but to disagree with her on the first. I would argue—as indeed I have already argued in the Spectator— that the policy of bolstering up France as a bulwark against German hegemony of the Continent has involved us in two gigantic wars, in both of which Germany was defeated and we and France were on the victorious side, but that victories and defeats have done nothing to alter the ineluctable fact that Germany is a much stronger power than France. Our victories have changed the world's balance of power greatly to our own disadvantage. Miss Cowles amply proves her case that Edward VII, when he played his part in carrying through the Anglo-French Entente, thought of it as an arrangement, but had no intention that it should become a military alliance. But if that is true, what does it prove—save that Lord Rosebery had a far keener sense of reality than other states- men of his time? Within a couple of years Germany was testing the Entente over Morocco, and the British found that they had either to accept diplomatic defeat or to announce themselves ready to support France in arms. Tangier, Miss Cowles quotes from Sir Winston Churchill, was 'the first milestone to Armageddon.' It is surely hardly a recommenda- tion for it.

Yet such criticisms, valid enough if Edward had truly been the architect of policy, are not deeply valid as criticism of the role which Miss Cowles rightly insists that Edward did in fact play. Miss Cowles tells with gusto the story of the rivalry between Edward and the Kaiser, but history triumphs over romance and at the end she justly recalls herself to reality and warns us against the melodramatic belief that it was out of this personal rivalry that the conflict of Britain and Germany grew. It grew out of much deeper causes. The personal rivalry was of secondary importance. And if that is so, then Edward's own views of what the policy should have been are of secondary importance. His role was not to initiate a foreign policy of his own but to smooth the way for the carrying through of his ministers' foreign policy. And there is no doubt that his social gifts had an important contribution to make—not so important a contribution as rumour ascribed to him at the time, but one a great deal more important than Sir Sidney Lee's article in the Dictionary of National Biography allowed.

No British monarch today could render exactly the services which Edward rendered because the world is no longer monarchical. Power in the world is no longer in the hands of States which are ruled by near blood-relations of the British monarch, and in this new world the influence of a monarch must be an influence of a different sort. For many years we used to tell ourselves that the Crown was the bond of unity which kept the Commonwealth together. We have discovered that, on the contrary, there are nations which are willing to have the Commonwealth on condition that they are not com- pelled to have the Crown. So today in our foreign relations foreign countries would clearly not be prepared to allow a British monarch to play the part that Edward VII played, even if a monarch willing to play that part existed. It is rather the paradox of today that the main political importance of a traditional monarchy is as a guarantee of freedom—a guarantee that a nation which preserves it is unlikely to sur- render itself to autocratic and totalitarian ways. Many men and women of past generations, if they returned to life today, would be surprised to find the liberal role which monarchy is playing in the modern world—not least among them Edward VII.