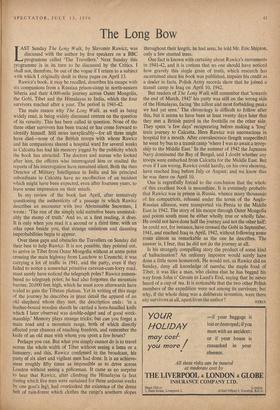 A ST Sunday The Long Walk, by Slavomir Rawicz, was discussed

with the author by live speakers on a BBC programme called 'The Travellers.' Next Sunday this programme is in its turn to be discussed by the Critics. I shall not, therefore, be out of the vogue if I return to a subject with which I originally dealt in these pages on April 13.

Rawicz's book, it may be recalled, describes his escape with six companions from a Russian prison-camp in north-eastern Siberia and their 4,000-mile journey across Outer Mongolia. the Gobi, Tibet and the Himalayas to India, which the four survivors reached after a year. The period is 1941-42.

The main reason why The Long Walk, as well as being widely read, is being widely discussed centres on the question of its veracity. This has been called in question. None of the three other survivors has been traced or has come forward to identify himself. Still more inexplicably—for all three might have died—none of the British troops with whom Rawicz and his companions shared a hospital ward for several weeks in Calcutta has had his memory jogged by the publicity which the book has attracted. The doctors and nurses who looked after him, the officers who interrogated him or studied the reports of his interrogation have remained silent. Both the then Director of Military Intelligence in India and his principal subordinate in Calcutta have no recollection of an incident which might have been expected, even after fourteen years, to leave some impression on their minds.

In my review of the book last April, after tentatively questioning the authenticity of a passage in which Rawicz describes an encounter with two 'Abominable Snowmen, I wrote: 'The rest of the simply told narrative bears unmistak- ably the stamp of truth.' And so, at a first reading, it does. It is only when you read it a second or a third time, with an atlas open beside you, that strange omissions and daunting improbabilities begin to appear.

Over these gaps and obstacles the Travellers on Sunday did their best to help Rawicz. It is not possible, they pointed out, to arrive in Tibet from Outer Mongolia without at some point crossing the main highway from Lanchow to Urumchi; it was carrying a lot of traffic in 1941, and the party, even if they failed to notice a somewhat primitive caravan-cum-lorry road, must surely have noticed the telegraph Niles? Rawicz remem- bered no telegraph poles: he had also forgotten the mountain barrier, 20,000 feet high, which he must soon afterwards have scaled to gain the Tibetan plateau. Yet in writing of this stage of the journey he describes in great detail the apparel of an old shepherd whom they met; the description ends : 'in a leather-bound wooden sheath he carried a horn-handled knife which I later observed was double-edged and of good work- manship.' Memory plays strange tricks; but can you forget a main road and a mountain range, both of which directly affected your chances of reaching freedom, and remember the knife of an old man with whom you spent a few hours? throughout their length; he had seen, he told Mr. Eric Shipton, only a few stunted trees.

One fact is known with certainty about Rawicz's movements in 1941-42, and it is curious that no one should have noticed how gravely this single grain of truth, which research has ascertained since his book was published, impairs his credit as a dealer in facts. Polish Army records show that he joined a transit camp in Iraq on April 10, 1942.

But readers of The Long Walk will remember that 'towards the end of March, 1942' his party was still on the wrong side of the Himalayas, facing 'the tallest and most forbidding peaks we had yet seen.' The chronology is difficult to follow after this, but it seems to have been at least twenty days later that they met a British patrol in the foothills on the other side.

They spent 'a few days' recuperating before making a 'long' train journey to Caleutta. Here Rawicz was unconscious in hospital for a month. After convalescence (length unspecified) he went by bus to a transit camp 'where I was to await a troop- ship to the Middle East.' In the summer of 1942 the Japanese Navy dominated the Bay of Bengal, and I doubt whether any troops were embarked from Calcutta for the Middle East. But even if I am wrong, Rawicz could hardly, on his own showing, have reached Iraq before July or August; and we know that he was there on April 10.

One is regretfully forced to the conclusion that the whole of this excellent book is moonshine. It is extremely probable that Rawicz was in prison in Russia, whence many thousands of his compatriots, released under the terms of the Anglo- Russian alliance, were transported via Persia to the Middle East in 1942. The story of his escape through Outer Mongolia and points south must be either wholly true or wholly false. He could not have done half the journey and not the other half; he could not, for instance, have crossed the Gobi in September. 1941, and reached Iraq in April, 1942, without following some route almost as remarkable as the one he describes. The answer is, I fear, that he did not do the journey at all.

Is his strangely compelling story the product of some kind of hallucination? An ordinary impostor would surely have done a little more homework. He would not, as Rawicz did on Sunday, deny all knowledge of tsamba, the staple food of Tibet; it was like a man, who claims 'that he has begged his way from John o' Groats to Land's End, saying that he never heard of a cup of tea. It is noticeable that the two other Polish members of the expedition were not among its survivors; but why, if the whole thing was a deliberate invention, were there, any survivors at all, apart from the author? StRIX