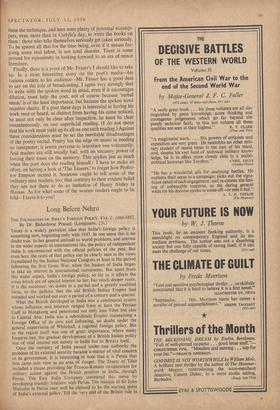 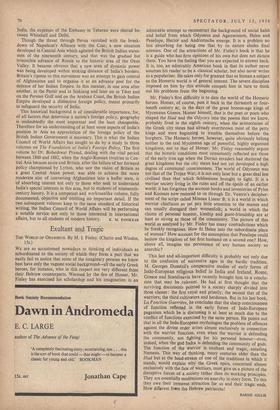 THE FOUNDATION OF INDIA'S FOREIGN POLICY. Vol. 1: 1,6O-1882. By Dr. Bisheshwar Prasad. (Longmans, 25s.) THERE is a widely prevalent idea that India's foreign policy is something new, beginning only with 1947. In one sense this is no doubt true. In her general attitude to world problems, and interest in the wider aspects of international life, the policy of independent India is unconnected with the official policies of the past. But even here the roots of that policy can be clearly seen in the views formulated by the Indian National Congress at least in the period following the first Great War, when the leaders of India began to take an interest in international movements. But apart from this wider aspect, India's foreign policy, so far as it affects the areas which are of special interest to her, has much deeper roots. Ii is the successor, no doubt in a partial and a greatly modified form, to the policies that the old British Indian Empire had imitated and worked out over a period of a century and a quarter.

What the British developed in India was a contine.ntal system whose influence and interests ranged from at least the Persian Gulf to Hongkong and penetrated not only into Tibet but also to Central Asia. India was a subordinate Empire maintaining a Foreign Office of its own and following, no doubt under the general supervision of Whitehall, a regional foreign policy. But as the region itself was one of great importance, where many Empires•met, the gradual development of a British Indian policy was of vital interest not merely to India but to Britain itself.

India, the expenses of the Embassy in Teheran were shared be- tween Whitehall and Delhi.

Though the threat through Persia vanished with the break- down of Napoleon's Alliance with the Czar, a new situation developed in Central Asia which agitated the British Indian states- men of the nineteenth century, and that was the gradual but irresistible advance of Russia to the historic area of the Oxus Valley. It became obvious that a new area of dynamic power was being developed within striking distance of India's borders. Britain's riposte to this movement was an attempt to gain control of Afghanistan and to organise it as an advance post for the defence of her Indian Empire. In this manner, in one area after another, in the Pamir and in Sinkiang and later on in Tibet and on the Persian Gulf and on the Arabian Coast, the British Indian Empire developed a distinctive foreign policy, meant primarily to safeguard the security of India.

This historical background is of considerable importance, for, of all factors that determine a nation's foreign policy, geography is undoubtedly the most important and the least changeable. Therefore for an understanding of at least some aspects of India's position in Asia an appreciation of the foreign policy of the British Indian Government is necessary. This is what the Indian Council of World Affairs has sought to do by a study in three volumes on The Foundation of India's Foreign Policy. The first volume by Dr. Bisheshwar Prasad, dealing with the vital period between 1860 and 1882, when the Anglo-Russian rivalries in Cen- tral Asia became acute and Britain, after the failure of her forward policy championed by Lytton, who saw the vision of Britain as a great Central Asian power, was able to achieve the more moderate aim of converting Afghanistan into a buffer state, is of absorbing interest not only to those who seek to understand India's special interests in this area, but to students of nineteenth- century history. It is a competent and workmanlike volume, fully documented, objective and omitting no important detail. If the two subsequent volumes keep to the same standard of historical writing, the Indian Council of World Affairs will be performing a notable service not only to those interested in international affairs, but to all students of modern history. K. M. PANIKKAR