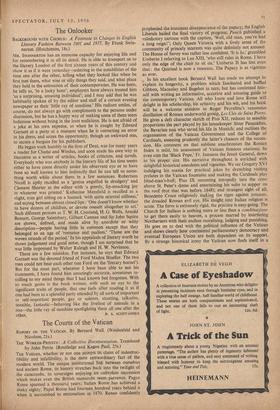 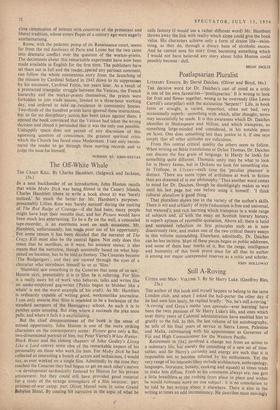 The Courts of the Vatican

REPORT ON THE VATICAN. By Bernard Wall. (Weidenfeld and N icolson, 21s.)

Tim Vatican, whether or not one accepts its claim of indestruc- tibility and infallibility, is the most extraordinary fact of the modern world. The unique institutional link between ourselves and ancient Rome, its history stretches back into the twilight of the catacombs, its sovereigns enjoying an unbroken succession which makes even the British monarchs seem. parvenus. Pagan Rome spanned a thousand years; Italian Rome has achieved a shaky eighty; Papal Rome had fourteen hundred years behind it when it succumbed to trationalism in 1870. Renan confidently

prophesied the imminent disappearance of the papacy; the English Liberals hailed the final victory of progress; Punch published a valedictory cartoon with the caption, `Well, old man, you've had a long reign!'; Only Queen Victoria with a lively sense of the community of princely interests was quite definitely not amused. The House of Savoy was rather less confident. 'It is he,' grumbled Umberto I referring to Leo XIII, 'who still rules in Rome. I have only the edge of the chair to sit on.' Umberto II has lost even that : the Quirinal is now a museum. The Papacy is as vigorous as ever.

In his excellent book Bernard. Wall has made no attempt to explain its longevity, a problem which fascinated and baffled Gibbon, Macaulay and Bagehot in turn, but has contented him- self with writing an informative, accurate and amusing guide to the contemporary Vatican. All who know and love Rome will delight in his scholarship, his urbanity and his wit, and his book will be a welcome antidote to Roger Peyrefitte's venomous distillation of Roman underworld gossip, Les Cles de Saint Pierre. He gives a deft character sketch of Pius XII; reduces to sensible proportions the part played by his housekeeper Sister Pasqualina. the Bavarian nun who saved his life in Munich; and outlines the organisation of the Vatican Government and the College of Cardinals, assessing prudently the latter's chances of the succes- sion. His comment on that sublime anachronism the Roman Index is mild, his assessment of Vatican finances cautious; he even cuts the 'Black Pope,' Fr. Janssens the Jesuit General, down to his proper size. His narrative throughout is enriched with delightful historical anecdotes and vignettes. We see Gregory XV I indulging his mania for practical jokes by drenching visiting prelates in the Vatican fountains and making the Cardinals play blind-man's-buff; Pius IX mounting intrepidly into the cross above St. Peter's dome and entertaining his suite to supper on the roof (but that was before 1848); and strangest sight of all, Benedetto Croce religiously making the signs against jettatore. the dreaded Roman evil eye. His insight into Italian religion is acute. The form is extremely rigid, the practice is easy-going. The Church for Italians is nothing more or less than a combinazione to get them easily to heaven, a process marred by interfering Northerners with their endless moralising, judging and punishing. He goes on to deal with the political influence of the Vatican and shows clearly how continental parliamentary democracy and eventual European Union arc both dependent on its support. By a strange historical irony the Vatican now finds itself in a

close communion of interest with countries of the protestant and liberal tradition, whose errors Popes of a century ago were eagerly anathematising.

Rome, with the pedantic pomp of its Renaissance court, seems far from the red banlieues of Paris and Lyons but the two came into dramatic conflict over the question of the worker-priests. The documents about this remarkable experiment have now been made available in English for the first time. The publishers have set them out in full and the reader, „spared any partisan comment, can follow the whole momentous story from the launching of the mission by Cardinal Suhard in 1943 down to its suppression by his successor, Cardinal Feltin, ten years later. As a result of a protracted triangular struggle between the Vatican, the French hierarchy and the worker-priests themselves, the priests were forbidden to join trade unions, limited to a three-hour working day, and ordered to take up residence in community houses. Two-thirds of the hundred priests have ignored these instructions, but so far no disciplinary action has been taken against them. I opened the book convinced that the Vatican had taken the wrong decision and closed it persuaded that it was the only one possible. Unhappily space does not permit of any discussion of this agonising question of conscience, the greatest spiritual crisis which the Church has faced since Modernism. I can only recom- mend the reader to go through these moving records and to judge the issue for himself. NORMAN ST. JOHN-STEVAS