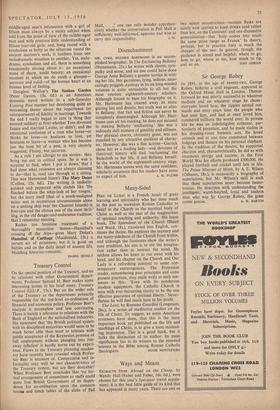 ON the special position of the Treasury, and on its relations with other Government depart- ments, Professor Samuel H. Beer makes some interesting points in his brief essay, Treasury Control (0.U.P., 15s.). But on the wider role of the Treasury as the department primarily responsible for the top-level co-ordination of financial and economic policy, Professor Beer's analysis is incomplete and less convincing. There is barely a reference to relations with the Bank of England or the nationalised industries. His statement that `the British political system with its disciplined majorities would seem to be much better able than most to tolerate wide public acceptance of the Keynesian promise of full employment without plunging into run- away inflation' is hardly borne out by experi- ence. Flaws in the Treasury planning machin- ery have recently been revealed which Profes- sor Beer is unaware of. Compromise and in- formality may well be two characteristics of the Treasury system, but are they desirable? When Professor Beer concludes that 'no for- mal arrangement of committees or staffs could quite free British Government of its depen- dence for co-ordination upon the common rooms and lunch tables of the clubs of Pall Mall, . . one can only wonder apprehen-

sively whether the conversation in Pall Mall is sufficiently well-informed, apposite and wise to