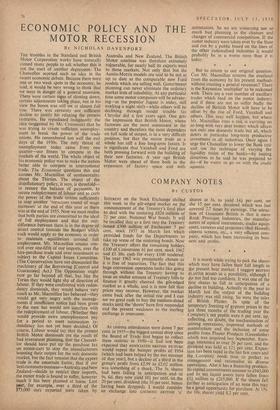 NICHOLAS DAVENPORT THE troubles in the Standard and British Motor Corporation works have naturally caused many people to ask whether this is not the start of another depression. The Chancellor scorned such an idea in the recent economic debate. Because there were one or two weak spots in the economy, he said, it would be very wrong to think that we were in danger of a general recession. There were certain signs of slowing down, certain adjustments taking place, but in his view the boom was still on at almost full rate. There was certainly not sufficient decline to justify his relaxing the present restraints. He repudiated indignantly the idea. (suggested by Mr. Crossman) that he was trying to create sufficient unemploy- ment to break the power of the 'trade unions. He remembered too well the evil days of the 1930s. The only threat of unemployment today came from one quarter—our fitness to compete in the markets of the world. The whole object of his economic policy was to make the nation better able to compete in international trade. The Economist questions this and accuses Mr. Macmillan of sentimentality about the Thirties. The object of the disinflationary policy, it says, is threefold— to restore the balance of payments, to secure redeployment of labour and to curb the power of the trade unions sufficiently to stop another 'voracious round of wage increases' at the end of this year as there was at the end of 1955. Now we must realise that both parties are committed to the ideal of full employment and that the only difference between them is in the degree of direct control (outside the Budget) which each would apply to the economy in order to maintain equilibrium around full employment. Mr. Macmillan retains con- trol over one-fifth of our imports, over the hire-purchase trade and over investment as subject to the Capital Issues Committee. (The Conservatives have not dismantled the machinery of the Borrowing [Control and Guarantees] Act.) The Opposition might now go far beyond all that, but .like the Tories they would fight shy of direction of labour. If they were confronted with redun- dancy dismissals, they would behave very much as Mr. Macmillan has behaved—they would get very angry with the manage- ments if insufficient notice had been given to the men but would not interfere with the redeployment of labour. (Whether they would provide extra unemployment pay for a period to meet automation re- dundancy has not yet been decided.) Of course, Labour would say that the present British Motor dismissals are the result of bad investment planning, that the Chancel- lor should have put up the purchase tax on motor-cars to stop the manufacturers boosting their output for the soft domestic market, but the fact remains that the export trade is the uncertain factor, that if our best customers overseas—Australia and New Zealand—decide to restrict their imports, the motor trade is bound to suffer, however much it has been planned at home. Last year, for example, over a third of the 373,000 cars exported were taken by Australia and New Zealand. The British Motor combine was therefore extremely vulnerable, for nearly half its exports went to those markets. Not only that but the Austin-Morris models are said to be not as up to date as the comparable new Ford models which are selling well. Government planning can never eliminate the ordinary market tests of saleability. At any particular time some motor companies will be advanc- ing—as the popular Jaguar is today, still working a night shift—while others will be declining through model trouble (as Chrysler did a few years ago). One gets the impression that British Motor, whose factories are the most automated in the country and therefore the most dependent on full scale of output, is in a very difficult position, but that the motor trade as a whole has still a fine long-term future. It is significant that Vauxhall and Ford are both pressing forward with the building of their new factories. A year ago British Motor were ahead of them both in the expansion of factory space and with automation. So we are witnessing not so much bad planning as the chances and changes of commercial competition. If the motor industry were taken over by the State and run by a public board on the lines of the other nationalised industries it would probably be in a worse mess than it is today.

But to return to our original question. Can Mr. Macmillan remove the overload from the economy by his present methods without creating a general recession? There is the Keynesian 'multiplier' to be reckoned with. There are a vast number of ancillary trades which feed on the motor industry and if these are not to suffer badly the decline of Biritish Motor will have to be offset by the rise of Ford, Vauxhall and others. This may well happen, but where Mr. Macmillan runs a risk is carrying on so long with very dear money which affects not only one domestic trade hut all, which deters in particular long-term productive investment in all industries. Once again I urge the Chancellor to lower the Bank rate and use the technique of varying the liquidity ratios of the banks—by issuing directives as he said he was prepared to do—if he wants to go on with the credit squeeze.