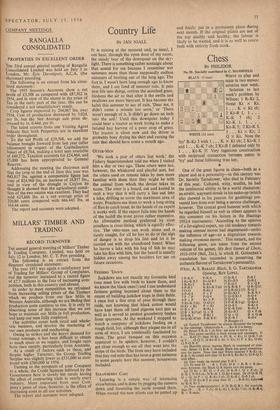 No. 58. Specially contributed by C. MANSFIELD

One of the great figures in chess—both as a player and as a personality—in this century was Dr. Savielly Tartakower, who died in February of this year. Cultured, witty, erudite, he had the intellectual ability to be a world champion; an erratic, wayward streak in his make-up (which also showed in his passion for gambling) pre- vented him from ever being a serious challenger, however. The cynical good humour with which he regarded himself as well as others appears in this comment on his failure in the Hastings 1953/4 tournament: 'According to the opinion of a far-sighted expert, my old tendency towards making unusual moves had degenerated—under the influence of age—to a disposition towards making erroneous moves.' This remark, and the following game, are taken from the second volume of his games, My Best Games of Chess, 1931-1954 (Bell, 215.), in which H. Golombek's translation has succeeded in preserving the authentic flavour of Tartakower's personality, White, A. S. BARATZ Black, S. G. TARTAKOWER Opening, RUY LOPEZ.