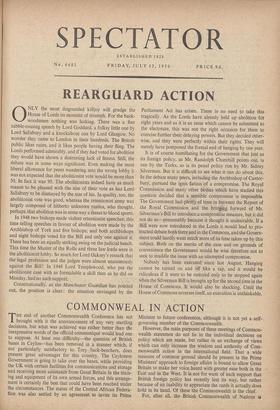 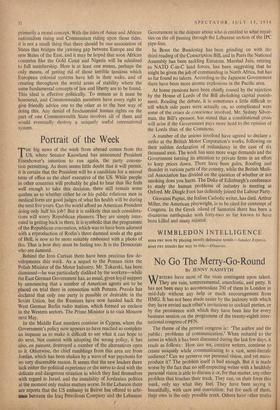 THE end of another Commonwealth Conference has not brought with it the announcement of any very startling decisions, but what was achieved was rather better than tfie inexpressive words of the official communiqué would lead one,. to suppose. At least one difficulty—the question of British bases in Ceylon—has been removed in a manner which; if not particularly satisfactory to Tory back-benchers, does present great advantages for this country. The Ceylonese Government is going to take over the bases, while providing the UK with certain facilities for communications and storage and receiving more assistance from Great Britain in the train- ing and equipment of its own armed forces, and this arrange- ment is certainly the best that could have been reached under the circumstances. The status of the Central African Federa- tion, was also settled by an agreement to invite its • Prime Minister to future conferences, although it is not yet a self- governing member of the Commonwealth.

However, the main purposes of these meetings of Common- wealth statesmen do not lie in the individual decisions on policy which are made, but rather in an exchange of views which can only increase the wisdom and authority of Com- monwealth action in the international field. That a wide measure of common ground should be present in the Prime Ministers' approach to foreign affairs is bound to allow Great Britain to make her voice heard with greater ease both in the East and in 'the West. It is.not for want of such support that British foreign policy has recently lost its way, but rather because of an inability to appreciate the cards it actually does hold in its hand. Of these the Commonwealth is the chief. primarily a moral concept.. With the tides of Asian and African nationalism rising and Communism riding upon those tides, it is not a small thing that there should be one association of States that bridges the yawning gap between Europe and the new States of the East. and it may be hoped that soon African countries like the Gold Coast and Nigeria will be admitted to full membership. Here is at least one means, perhaps the only means, of getting rid of those terrible tensions which European colonial systems have left in their wake, and of creating throughout the world areas of stability where the same fundamental concepts of law and liberty are to be found. This ideal is effective politically. To remain so it must be honoured, and Commonwealth members have every right to give friendly advice one to the other as to the best way of doing this. Any denial of fundamental human rights on the part of one Commonwealth State involves all of them and would eventually destroy a uniquely useful international system.