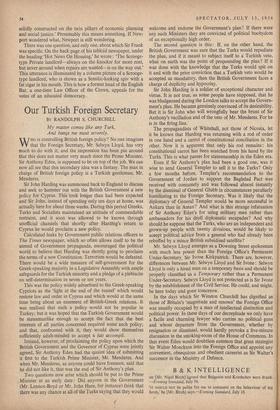 BY RANDOLPH S. CHURCHILL My master comes like any Turk. And bangs me most severely.

WHo is controlling British foreign policy? No one imagines that the Foreign Secretary, Mr. Selwyn Lloyd, has very much to do with it; and the impression has been put around that this does not matter very much since the Prime Minister, Sir Anthony Eden, is supposed to be on top of the job. We can now all see that this secondary idea was a fantasy. The man in charge of British foreign policy is a Turkish gentleman, Mr. Menderes.

Sir John Harding was summoned back to England to discuss and seek to hammer out with the British Government a new policy for Cyprus. This took longer than had been expected and Sir John, instead of spending only ten days at home, was actually here for about three weeks. During this period Greeks, Turks and Socialists maintained an attitude of commendable restraint, and it soon was allowed to be known through unofficial channels that shortly after Harding's return to Cyprus he would proclaim a new policy.

Calculated leaks by Government public relations officers to The Times newspaper, which so often allows itself to be the utensil of Government propaganda, encouraged the political world to believe that Harding was shortly going to proclaim the terms of a new Constitution. Terrorism would be defeated. There would be a wide measure of self-government for the Greek-speaking majority in a Legislative Assembly with ample safeguards for the Turkish minority and a pledge of a plebiscite on self-determination in seven or ten years.

This was the policy widely advertised to the Greek-speaking Cypriots as the 'light at the end of the tunnel' which would restore law and order in Cyprus and which would at the same time bring about an easement of British-Greek relations. It was realised that such a policy would not be popular in Turkey; but it was hoped that the Turkish Government would be statesmanlike enough to accept the fact that the best interests of all parties concerned required some such policy; and that, confronted with it, they would show themselves sufficiently adult-minded to accept a fait accompli.

Instead, however, of proclaiming the policy upon which the British Government and the Governor of Cyprus were jointly agreed, Sir Anthony Eden had the quaint idea of submitting it first to the Turkish Prime Minister, Mr. Menderes. And when Mr. Menderes, as anyone could have foreseen, said that be did not like it, that was the end of Sir Anthony's plan.

Two questions now arise which should be put to the Prime Minister at an early date : Did anyone in the Government (Mr. Lennox-Boyd or Mr. John Hare, for instance) think that there was any chance at all of the Turks saying that they would welcome and endorse the Government's plan? If there were any such Ministers they are convicted of political boobydom of an exceptionally high order.

The second question is this : If, on the other hand. the British Government was sure that the Turks would repudiate the plan, and if it meant to subject itself to a Turkish veto, what on earth was the point of propounding the plan? If it was done with the knowledge that the Turks would spit on it and with the prior conviction that a Turkish veto would be accepted as mandatory, then the British Government faces a charge of duplicity and hypocrisy.

Sir John Harding is a soldier of exceptional character and virtue. It is not true, as some people have supposed, that he was bludgeoned during the London talks to accept the Govern- ment's plan. He became genuinely convinced of its desirability. But it is Sir John who will wrongfully bear the brunt of Sir Anthony's vacillation and of the veto of Mr. Menderes. For he is in the firing line.

The propagandists of Whitehall, not those of Nicosia, let it be known that Harding was returning with a rod of order in one hand and a carrot of constitutional conciliation in the other. Now it is apparent that only his rod remains : his constitutional carrot has been snatched from his hand by the Turks. This is what passes for statesmanship in the Eden era.

Even if Sir Anthony's plan had been a good one, was it wise to send General Templer to sell it to the Turks? Only a few months before, Templer's recommendation to the Government of Jordan to support the Baghdad Pact was received with contumely and was followed almost instantly by the dismissal of General Glubb in circumstances peculiarly humiliating to the Foreign Secretary. Was it likely that the diplomacy of General Templer would be more successful in Ankara than in Aman? And what is this strange infatuation of Sir Anthony Eden's for using military men rather than ambassadors for his droll diplomatic escapades? And why should he suppose that the Turks, who are an independent and grown-up people with twenty divisions, would be likely to acoept political advice from a general who had already been rebuffed by a minor British subsidised satellite?

In the days which Sir Winston Churchill has dignified as those of Britain's 'magnitude and renown' the Foreign Office was usually occupied by a man of intellectual distinction and political power. In these days of our decrepitude we only have a facile and charming lawyer who carries no political guns and whose departure from the Government, whether by resignation or dismissal, would hardly provoke a five-minute discussion in the smoking-room of the House of Commons. In that event Eden would doubtless summon that great strategist Sir Walter Monckton into the Foreign Office and appoint any convenient, obsequious and obedient careerist as Sir Walter's successor in the Ministry of Defence.