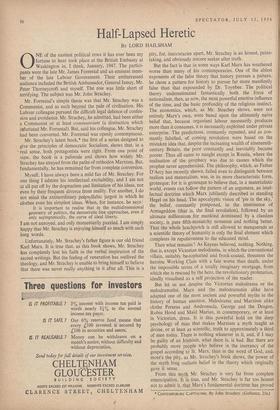 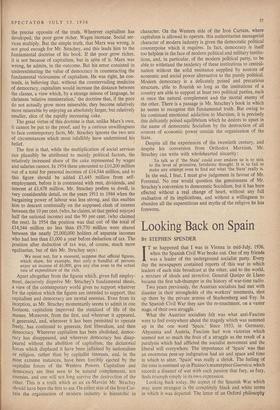 BY LORD HAILSHAM 0 NE of the nastiest political rows it has ever been my fortune to hear took place at the British Embassy at Washington in, I think, January, 1947. The partici- pants were the late Mr. James Forrestal and an eminent mem- ber of the late Labour Government. Their embarrassed audience included the British Ambassador, General Ismay, Mr. Peter Thorneycroft and myself. The row was little short of terrifying. The subject was Mr. John Strachey.

Mr. Forrestal's simple thesis was that Mr. Strachey was a Communist, and as such beyond the pale of civilisation. His Labour colleague pursued the difficult legal defence of confes- sion and avoidance. Mr. Strachey, he admitted, had been either a Communist or at least communisant (a distinction which infuriated Mr. Forrestal). But, said his colleague, Mr. Strachey had been converted. Mr. Forrestal was openly contemptuous.

Mr. Strachey's latest book,* the first of a series designed to give the principles of democratic Socialism, shows that, in a • real sense, both protagonists were right. From one point of view, the book is a palinode and shows how widely Mr. Strachey has strayed from the paths of orthodox Marxism. But. fundamentally, he has remained far from complete conversion. Myself, I have always been a mild fan of Mr. Strachey. For one thing I admire his intellectual excitability, and I am not at all put off by the dogmatism and limitation of his ideas, nor even by their frequent divorce from reality. For another, I do not mind the extraordinary polysyllabic jargon in which he clothes even his simplest ideas. When, for instance, he says : It is important to realise that in the multidimensional geometry of politics, the democratic line approaches, even if , only asymptotically, the curve of ideal liberty.

I am not annoyed, and only momentarily puzzled. I am simply happy that Mr. Strachey is enjoying himself so much with such long words.

Unfortunately, Mr. Strachey's father figure is our old friend Karl Marx. It is true that, as this book shows, Mr. Strachey has completely lost his faith in the verbal inspiration of the sacred writings. But the feeling of veneration has outlived the theology, and Mr. Strachey is unable to bring himself to believe that there was never really anything in it after all. This is a pity, for, inaccuracies apart, Mr. Strachey is an honest, pains- taking, and obviously sincere seeker after truth.

But the fact is that in some ways Karl Marx has weathered worse than many of his contemporaries. One of the ablest exponents of the false theory that history pursues a pattern, he chose a pattern for history to pursue far more manifestly false than that expounded by Dr. Toynbee. The political theory underestimated fantastically both the force of nationalism, then, as now, the most powerful emotive influence of the time, and the basic profundity of the religious instinct. The economics, which, as Mr. Strachey shows, were not entirely Marx's own, were based upon the ultimately naive belief that, because organised labour necessarily produces more than it consumes, it is necessarily exploited under private enterprise. The predictions, constantly repeated, and as con- stantly falsified, of coming revolution were based on the mistaken idea that, despite the increasing wealth of nineteenth- century Britain, the poor constantly and inevitably became poorer. Thus all came to naught except in Russia, where the realisation of the prophecy was due to causes which the prophet never apprehended. The philosophy, which, as Father D'Arcy has recently shown, failed even to distinguish between realism and materialism, was, in its more characteristic form, grotesque; for it is grotesque to believe that, in a materialistic world, events can follow the pattern of an argument, an intel- lectual doctrine which Marx jubilantly described as standing Hegel on his head. The apocalyptic vision of 'pie in the sky,' the belief, constantly postponed, in the imminence of Armageddon (that is, the final revolution), followed by an ultimate millennium for mankind dominated by a classless society, is pure fifth-monarchy nonsense and nothing better. That the whole hotchpotch is still allowed to masquerade as a scientific theory of humanity is only the final element which completes its repulsiveness to the educated mind.

Then what remains? As Keynes believed, nothing. Nothing, that is, except Victorian melodrama, in which the conventional villain, suitably be-tophatted and frock-coated, threatens the heroine Working Class with a fate worse than death, under the impossible terms of a totally imaginary mortgage, from which she is rescued by the hero, the revolutionary proletarian, ideally visualised as a self projection of the reader.

But let us not despise the Victorian melodrama or the melodramatist. Marx and the melodramatist alike have adapted one of the most ancient and powerful myths in the history of human emotion. Melodrama and Marxism alike clothe Perseus and Andromeda, George and the Dragon. Robin Hood and Maid Marian, in contemporary, or at least in Victorian, dress. It is this powerful hold on the deep psychology of man that makes Marxism a myth taught as divine, or at least as scientific, truth to approximately a third of men today. There is nothing whatever in it, and, if I may be guilty of an Irishism, what there is, is bad. But there are probably more people who believe in the inerrancy of the gospel according to St. Marx, than in the word of God, and, more's the pity, as Mr. Strachey's book shows, the power of the myth long outlasts belief in the theory which originally gave it sense.

From this myth Mr. Strachey is very far from complete emancipation. It is true, and Mr. Strachey is far too honest not to admit it, that Marx's fundamental doctrine has proved * CONTEMPORARY CAPITALISM. By John Strachey. (Gollancz, 25s.) the precise opposite of the truth. Wherever capitalism has developed, the poor grow richer. Wages increase. Social ser- vices multiply. But the simple truth, that Marx was wrong, is not good enough for Mr. Strachey, and this leads him to the fundamental doctrine of his book. If, the poor grow richer, it is not because of capitalism, but in spite of it. Marx was wrong, he admits, in the outcome. But his error consisted in underestimating the value of democracy in counteracting the fundamental viciousness of capitalism. He was right, he con- tends, in believing that, without the countervailing medicine of democracy, capitalism would increase the distance between the classes, a view which, by a strange misuse of language, he christens 'relative immiseration,' the doctrine that, if the poor do not actually grow more miserable, they become relatively more miserable by enjoying an absolutely larger, but relatively smaller, slice of the rapidly increasing cake.

The great virtue of this doctrine is that, unlike Marx's own, it cannot be put to the proof, and by a curious unwillingness to face contemporary facts, Mr. Strachey ignores the two sets of circumstances which must infallibly have undermined his belief.

The first is that, while the multiplication of social services can plausibly be attributed to mainly political factors, the relatively increased share of the cake represented by wages and salaries cannot. In 1954 these amounted to £10,200 million out of a total for personal incomes of £14,544 million, and to this figure Should be added £1,645 million from self- employment, before it is contrasted with rent, dividends, and interest at £1,678 million. Mr. Strachey prefers to dwell, in very considerable detail, on the years 1911 to 1944 when the bargaining power of labour was less strong, and this enables him to descant continually on the supposed clash of interest between the 10 per cent. (who, he claims, at that period enjoyed half the national income) and the 90 per cent. (who claimed the rest). In 1954 the position was that out of the total of £14,544 million no less than £9,770 million were shared between the nearly 25,000,000 holders of separate incomes who had less than £1,000 a year before deduction of tax. The position after deduction of tax was, of course, much more egalitarian, but of this Mr. Strachey says : We must not, for a moment, suppose that official figures, which show, for example, that only a handful of persons enjoy an income of £6,000, give any clue even to the actual rate of expenditure of the rich.

Apart altogether from the figures which, given full employ- ment, decisively disprdve Mr. Strachey's fundamental thesis, a view of the contemporary world gives no support whatever for the opinion which the figures are intended to support, that capitalism and democracy are mortal enemies. Even from its inception, as Mr. Strachey momentarily seems to admit in one footnote, capitalism improved the standard of life of the masses. Moreover, from the first, and wherever it appeared, it _generate:1, and, wherever it has been permitted to operate freely, has continued to generate, first liberalism, and then democracy. Wherever capitalism has been abolished, democ- racy has disappeared, and wherever democracy has disap- peared without the abolition of capitalism, the dictatorial forces which displaced it have been inflamed by 'nationalism or religion, rather than by capitalist interests, and, in the most extreme instances, have been forcibly ejected by the capitalist forces of the Western Powers. Capitalism and democracy are thus seen to be natural complements, not enemies, and one will not long survive the destruction of the other. This is a truth which as an ex-Marxist Mr. Strachey Should have been the first to see. On either side of the Iron Cur- tain the organisation of modern industry is hierarchic in character. On the Western side of the Iron Curtain, where capitalism is allowed to operate, this authoritarian managerial character of modem industry is given the democratic political counterpoise which it requires. In fact, democracy is itself too helpless in the face of modem political and military institu- tions, and, in particular, of the modern political party. to be able.to withstand the tendency of these institutions to central- isation without the solid resistance supplied by sources of economic and social power alternative to the purely political. Modem democracy is a delicately poised and precarious structure, able to flourish so long as the institutions of a country are able to support at least two political parties, each at once the natural complement and the mortal enemy of the other. There is a passage in Mr. Strachey's book in which he seems to recognise this fundamental truth. But owing to his continued emotional addiction to Marxism, it is precisely this delicately poised equilibrium which he desires to upset in the name of democratic Socialism by the destruction of all sources of economic power outside the organisation of the State.

Despite all the experiences of the twentieth century, and despite his conversion from Orthodox Marxism, Mr. Strachey can write with wholehearted sincerity : To talk as if 'the State' could ever enslave us is to sink to the level of primitive, fetishistic thought. It is to fail to make any attempt even to find out what 'the State' really is. In the end, I fear, I must give judgement in favour of Mr. Forrestal. No one would question the genuineness of Mr. Strachey's conversion to democratic Socialism, but it has been effected without a real change of heart, without any full realisation of its implications, and without a willingness to abandon all the superstitions and myths of the religion he has forsworn.