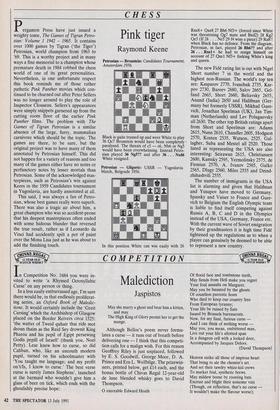 Pergamon Press have just issued a weighty tome, The Games of Tigran Petro- sian: Volume 1 1942 — 1965. It contains over 1000 games by Tigran (`the Tiger') Petrosian, world champion from 1963 to '69. This is a worthy project and in many ways a fine memorial to a champion whose premature death in 1984 robbed the chess world of one of its great personalities. Nevertheless, in one unfortunate respect this book reminds me of those rather pathetic Pink Panther movies which con- tinued to be churned out after Peter Sellers was no longer around to play the role of Inspector Clouseau. Sellers's appearances were simply snippets garnered up from the cutting room floor of the earlier Pink Panther films. The problem with The Games of Tigran Petrosian is a similar absence of the large, furry, mammalian carnivore which should be the topic. The games are there, to be sure, but the original project was to have many of them annotated by Petrosian himself. This did not happen for a variety of reasons and too many of the games either have no notes or perfunctory notes by lesser mortals than Petrosian. Some of the acknowledged mas- terpieces, such as Petrosian's win against Keres in the 1959 Candidates tournament in Yugoslavia, are hardly annotated at all.

This said, I was always a fan of Petro- sian, whose best games really were superb. There was also a tragic air about him, a great champion who was so accident-prone that his deepest masterpieces often ended with some hideous blunder that reversed the true result, rather as if Leonardo da Vinci had accidently spilt a pot of paint over the Mona Lisa just as he was about to add the finishing touch.

Black is quite trussed up and were White to play 36 Oc7 Bronstein would have been completely paralysed. The threats of c5 — c6, Nb6 or Ng5 would have been overwhelming. Instead Petro- sian played 36 Ng5?? and after 36 . . . Nxd6 White resigned.

In this position White can win easily with 26

The number of immigrants in the USA list is alarming and given that Halifman and Yusupov have moved to Germany, Spassky and Vaiser to France and Gure- vich to Belgium the English Olympic team is liable to find itself competing against Russia A, B, C and D in the Olympics instead of the USA, Germany, France etc. With the current wave of Soviet emigration by their grandmasters it is high time Fide tightened up the regulations as to when a player can genuinely be deemed to be able to represent a new country.