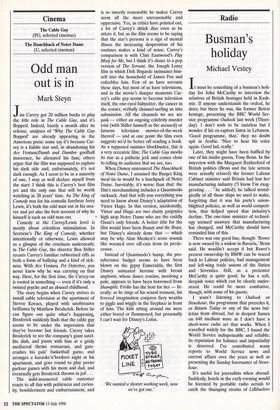 Odd man out is in

Jim Carrey got 20 million bucks to play the title role in The Cable Guy, and it's flopped. Indeed, barely a month after its release, analyses of 'Why The Cable Guy flopped' are already appearing in the American press: some say it's because Car- rey is a kiddie star and, in abandoning his Ace VenturalDumb and Dumber goofball innocence, he alienated his fans; others argue that the film was supposed to explore his dark side and, unfortunately, it's not dark enough. As I seem to be in a minority of one, I may as well declare myself from the start: I think this is Carrey's best film yet and the only one that will be worth watching in 20 years' time. As The King of Comedy was for his comedic forebear Jerry Lewis, it's both the odd man out in his oeu- vre and yet also the best account of why he himself is such an odd man out.

Comedy at the Carrey/Lewis level is mostly about relentless intimidation. In Scorsese's The King of Comedy, whether intentionally or otherwise, Lewis allowed us a glimpse of the cruelness underneath; in The Cable Guy, the director Ben Stiller recasts Carrey's familiar rubberised riffs as both a form of bullying and a kind of sick- ness. With Ace Ventura, Pet Detective, you never knew why he was carrying on that way. Here, for the first time, the Carrey-on is rooted in something — even if it's only a twisted psyche and an abused childhood. The story begins when Caney arrives to install cable television at the apartment of Steven Kovacs, played with unobtrusive brilliance by Matthew Broderick. Before he can figure out quite what's happening, Broderick suddenly finds that the cable guy seems to be under the impression that they've become fast friends. Caney takes Broderick to see the company's giant satel- lite dish, and jousts with him at a grisly mediaeval theme restaurant, and gate- crashes his pals' basketball game, and arranges a karaoke'n'hookers night at his apartment, and goes round to play porno parlour games with his mom and dad, and eventually gets Broderick thrown in jail ... The mild-mannered cable customer reacts to all this with politeness and curios- ity, bewilderment and embarrassment, and Is so sweetly reasonable he makes Carrey seem all the more unreasonable and oppressive. Yes, as critics have pointed out, a lot of Carrey's shtick dies even as he utters it, but as the film seems to be saying that the star's persona is a sign of mental illness the increasing desperation of his routines makes a kind of sense. Carrey's comparison is with Clint Eastwood's Play Misty for Me, but I think it's closer to a pop version of The Servant, the Joseph Losey film in which Dirk Bogarde insinuates him- self into the household of James Fox and enfeebles him. Few of us have servants these days, but most of us have televisions, and in the movie's sharper moments Car- rey's cable guy seems to become television itself, the one-eyed babysitter, the cancer in the corner, verbally channel-surfing us into submission. All the channels we see are junk — either an ongoing celebrity murder trial (with Stiller himself as the accused) or fatuous television movies-of-the-week thereof — and at one point the film even suggests we'd be better off reading a book. As a supposed summer blockbuster, this is a very eccentric film: The Cable Guy mocks its star as a pathetic jerk and comes close to telling its audience that we are, too.

When Disney announced The Hunchback of Notre Dame, I assumed the Burger King meal tie-in would be a lunchpack of Notre Dame. Inevitably, it's worse than that: the film's merchandising includes a Quasimodo rucksack. And that tells you everything you need to know about Disney's adaptation of Victor Hugo. In this version, incidentally, Victor and Hugo are two chatty gargoyles high atop Notre Dame who are the cuddly Quasi's only friends. A better title for the film would have been Beauty and the Beast, but Disney's already done that — which may be why Alan Menken's score sounds like warmed over off-cuts from its prede- cessor.

Instead of Quasimodo's hump, the pro- tuberance budget seems to have been blown on the gypsy Esmeralda, the first Disney animated heroine with breast implants, whose dance routine, involving a pole, appears to have been borrowed from Showgirls. Frollo has the hots for her — lit- erally: as he sings of his sexual torment, his fevered imagination conjures fiery wraiths to jiggle and wiggle in the fireplace in front of him. The kids sitting around me were either bored or flummoxed, but personally I can't wait for Disney's Lolita.

`We wanted a shorter working week, now we've got one.'