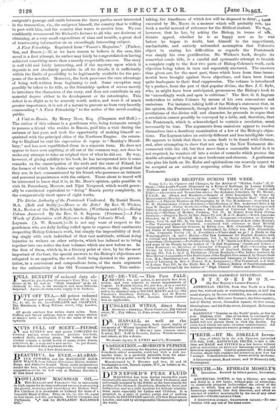 A Visit to Russia. By Henry Moor, Esq. (Chapman and

Hall.)— The author of this volume is a gentleman who, being fortunate enough to possess a friend who resides in Russia, paid him a visit during the autumn of last year, and took the opportunity of making himself ac- quainted with the principal cities of the Northern Empire. On return- ing to England lie sent his impressions de voyage to " Bentley's Miscel- lany," and has now republished them in a separate form. He does not appear to have seen anything at all out of the common way, nor does he make any attempt to take an original view of what he did see. By way, however, of giving solidity to his book, he has incorporated into it some remarks on the emancipation of the serfs and the state of Poland, for the former of which he claims our special attention, on the ground that they are, in fact, communicated by his friend, who possesses an intimate and personal acquaintance with the subject. Those about to travel will be interested to know that it is, in Mr. Moor's opinion, quite possible to visit St. Petersburg, Moscow, and Nijni Novgorod, which would gener- ally be considered equivalent to "doing" Russia pretty completely, in the comparatively short space of eight weeks.