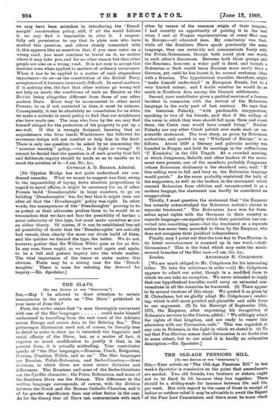 SIR,—May I be allowed to draw attention to certain inaccuracies in the article on " The Slays " published in your issue of June 6th ?

First, the writer states that "a man thoroughly conversant with one of the Slav languages could make himself understood in travelling from the east coast of the Adriatic across Europe and across Asia to the Behring Sea." This picturesque illustration need not, of course, be literally true in detail in order to show (as is intended) the linguistic and racial affinity of the Slave; but, as a matter of fact, it requires so much modification to justify it that, in its present form, it is actually misleading. Your contributor speaks of " the Slav languages,—Russian, Czech, Bulgarian, 'Servian, Croatian, Polish, and so on." The Slav languages are Russian, Polish-Bohemian, and Serbo-Croatian,—three divisions, in which there are come minor divisions and differences, The Russians and some of the Serbo-Croatians use the Cyrillic character ; the Poles, Bohemians, and some of the Southern Slave use the Roman. This difference in the written language corresponds, of course, with the division between the Greek and the Roman Catholic Churches, and is of far greater significance than any other factor in the case. As for the theory that all Slays can communicate with each other by reason of the common origin of their tongues,

I bad recently an opportunity of putting it to the test when I met at Prague representatives of every Slav race in Europe,—all educated men. My conclusion was that, while all the Southern Slave speak practieally the same language, they can certainly not communicate freely with the Polish-Bohemians, though both could pick out words in each other's discourses. Between both these groups and the Russians, however, a wider gulf is fixed, and though a Bohemian or Serb would learn Russian more easily than a German, yet, until he has learnt it, he cannot exchange ideas with a Russian. The hypothetical traveller, therefore, might " make himself understood " In European Russia, but to a very limited extent; and I doubt whether be would do as ranch in Northern Asia among the Cossack settlements.

Second, your contributor gives a garbled version of a famous incident in connexion with the revival of the Bohemian language in the early part of last Century. He says that the historian Palacky, "with pardonable exaggeration, speaking to two of his friends, said that if the oeiling of the room in which they were should fall upon them and crush them, the Czech race would have ceased living." Neither Palacky nor any other Czech patriot ever made such an un- scientific statement. The true story, as given by Bohemian authorities, and quoted in my "Whirlpool of Europe," is as follows. About 1830 a literary and patriotic society was founded in Prague, and held its meetings in the coffee-house

II Komarku,' in the Old ljngelt. At a crowded meeting, at which Jungmann, Safarik, and other leaders of the move- ment were present, one of the members, probably Jungmann (whose Bohemian dictionary is the standard one), said: "If this ceiling were to fall and bury us, the Bohemian language would perish." As the room probably contained the bulk of the supporters, as well as the leaders, in the movement which rescued Bohemian from oblivion and reconstructed it as a modern langage, the statement can hardly be considered an exaggeration.

Thirdly, I must question the statement that " the Emperor has actually acknowledged the Bohemian nation's claims to separate treatment." The Bohemians have won for them- selves equal rights with the Germans in their country as regards language—an equality which their patriotism has con- verted into something more—but the treatment as a separate nation has never been accorded to them by the Emperor, who does not recognise their juridical independence.

Finally, may I point out that the true key to Pan-Slavism in its latest recrudescence is summed up in one word,—Anti- Germanism ? This is the bond which may unite the much- severed branches of the Slav race.—I am, Sir, &e., London. ARCHIBALD R. CorlarnouN.

[We are much obliged to Mr. Colquhoun for his interesting letter. To take his criticisms in order :—(1) Mr. Colquhoun appears to admit our point, though in a modified form to which we can take no exception. We never intended to imply that our hypothetical traveller could carry on animated con- versations in all the countries he traversed. (2) There appear to be several versions of this story. We quoted it as given by M. Chdradame, but we gladly adopt Mr. Colquhoun's render. ing, which is still more pointed and plausible and adds force to our argument. (3) In his Reseript of September 12th, 1871, the Emperor, after expressing his recognition of Bohemia's services to the Crown, added: " We willingly admit the rights of that kingdom, and are ready to renew this admission with our Coronation oath." This was regarded, at any rate in Bohemia, in the light in which we stated it. (4) To say that Pan-Slavism means Anti-Germanism is no doubt true to some extent, but to our mind it is hardly an exhaustive description.—En. Spectator.]