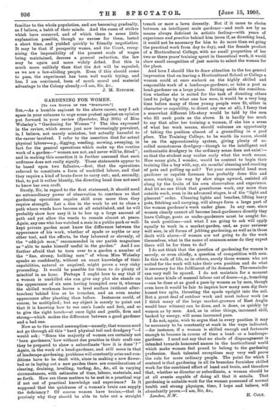 a humble aspirant to the above career, may I ask space in your columns to urge some protest against an opinion put forward in your review (Spectator, May 30th) of Miss Wolseley's " Gardening for Women " ? The idea expressed in the review, which seems just now increasingly prevalent, is, I believe, not merely mistaken, but actually harmful to the career involved. I refer to the assertion that for actual physical labour—e.g., digging, weeding, mowing, sweeping, in fact for the general operations which make up the routine work of a garden—" women are not, and never will be, fitted"; and in making this assertion it is further assumed that such unfitness does not really signify. These statements appear to be based upon two fallacies,—first, that the operations referred to constitute a form of unskilled labour, and that they require a kind of brute-force to carry out; and, secondly, that, to put it rather bluntly, the directing head does not need to know her own craft.

Surely, Sir, in regard to the first statement, it should need no extraordinary power of observation to convince us that gardening operations require skill even more than they require strength. Let a tiro in the work be set to clean a path where weeds have become at all established, and he will probably show how easy it is to hoe up a large amount of path and yet allow the weeds to remain almost at peace. Again, any one who has watched a man in a public park or well- kept private garden must know the difference between the appearance of his work, whether of spade or scythe or any other tool, and the efforts, be they laboured or slovenly, of the "odd-job man," recommended in our parish magazines as " able to make himself useful in the garden." And I am further afraid that to turn over to a garden a number of the " fine, strong, hulking men " of whom Miss Wolseley speaks so confidently, without an exact knowledge of their capabilities, natural or acquired, might prove a very risky proceeding. It would be possible for them to do plenty of mischief in an hour. Perhaps I ought here to say that if a woman is unskilled she can give any plot she stands on the appearance of six men having trampled over it, whereas the skilled workman leaves a level surface (without after- touches) behind him as be trenches, and an even neater appearance after planting than before. Instances could, of course, be multiplied ; but my object is merely to point out that it is knowing how to use one's hands and feet, and so to give the right touch—at once light and gentle, firm and strong—which makes the difference between a good gardener and a bad one.

Now as to the second assumption—namely, that women need not go through all this " hard physical toil and drudgery "—I would ask : " Since the majority of women are certainly not born gardeners,' how without due practice in their craft can they be prepared to show a subordinate how it is done' ? "

Again, in the work of a head-gardener, and still more in that of landscape-gardening, problems will constantly arise and con- ditions have to be dealt with, since in making a new flower- bed. or in laying out a new garden there are considerations of clearing, draining, levelling, turfing, &c. &c., all in varying circumstances, with estimates of time, labour, materials, and so forth. How are these matters to be met in a practical way if not out of practical knowledge and experience ? Is it supposed that the quickness of a woman's brain can supply the deficiency ? Of course women have brains,—that is precisely why they should be able to take out a straight trench or mow a lawn decently. But if it came to choice between an intelligent male gardener—and such are by no means always deficient in artistic feeling—with years of experience and practice behind him (even if, as directing head, it would not be necessary for him to do more than set going the practical work from day to day), and the female product of a Horticultural College, with no small proportion of her two or three years' training spent in theoretical work, it would show small recognition of just merits to select the woman for the place.

And here I should like to draw attention to the too general impression that on leaving a Horticultural School or College a woman could at once embark on the highly skilled and responsible work of a landscape-gardener, or take a post as head-gardener on a large place. Setting aside the considera- tion whether she is suited for the task of directing others (and to judge by what one has seen, it would be a very long time before many of these young people were fit, either in character or capability, to direct any one at all), I fancy that a somewhat different life-story would be told by the men who fill such posts as the above. It is hardly too much to say that after her training a woman, if she has a sense of what her work means, should welcome an opportunity of taking the position almost of a groundling in a good place. The Training College, to be worth its name, should be on the apprenticeship system, giving plenty of so- called monotonous drudgery—though to the intelligent and enthusiastic drudgery in the ordinary sense does not exist !— so that the student may realise early what the work means. How many girls, I wonder, would be content to begin their training like a boy with, say, six months' cleaning and crocking of pots and pulling up soil ? Yet your successful head man gardener or capable foreman has probably done this and more, working his way by slow steps upward, assisted all along by the fruits of his own observation and experience. And let no one think that greenhouse work, any more than outside work, even in its advanced stages, is of the "light and pleasant" order. Cleaning lights and benches, lifting heavy pots, fetching and carrying, will always form a large part of the woman gardener's work under glass. In any case, since women clearly cannot all become bead-gardeners directly they leave College, posts as under-gardeners must be sought for. In such positions—and what I am going to ask will apply equally to work in a market-garden, and, as your reviewer well sees, in all forms of jobbing gardening, as well as in those dealt with above—if women are not going to do the work themselves, what in the name of common-sense do they expect there will be for them to do?

I do not think that the question of gardening for women is merely, or even chiefly, a question of competition with men. In this walk of life, as in others, surely those women who are suited for the work will take their own position and do what is necessary for the fulfilment of its demands. The remainder can very well be spared. I do not maintain for a moment that some kinds of manual labour out of doors—e.g., trenching —can be done at as good a pace by women as by men, though even here it would be fair to inquire how many men dig their honest two spits, thrusting the spade upright into the soiL But a great deal of outdoor work and most indoor work (as I think many of the large market-growers of East Anglia would bear witness) can be done, and is done, as quickly by women as by men. And, as in other things, increased skill, backed by energy, will mean increased pace.

I do not, again, wish to argue that in every position it may be necessary to be constantly at work in the ways indicated, —for instance, if a, woman is skilled enough and fortunate enough to become in course of time a head- or a landscape- gardener. I need not say that no shade of disparagement is intended towards honoured names in the horticultural world which make women feel proud to belong to the gardening profession. Such talented exceptions may very well prove the rule for more ordinary people. The point for which I contend is that gardening in all its branches furnishes skilled work for the combined effort of hand and brain, and therefore that, whether as director or subordinate, a woman should be at all events capable of doing all that it entails. That gardening is suitable work for the woman possessed of normal health and strong physique, time, I hope and believe, will abundantly prove.—I am, Sir, &c.,