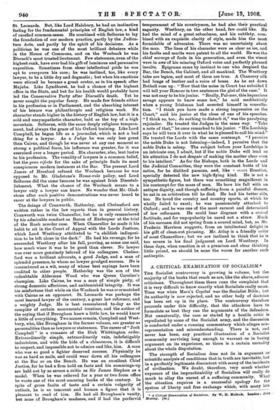 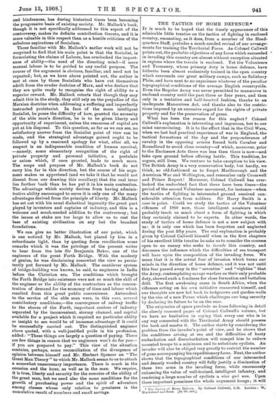 A CRITICAL EXAMINATION OF SOCIALISM.*

THE Socialist controversy is growing in volume, but the- majority of the books that reach us are, like the above, adverse criticisms. Throughout them there runs the complaint that it is very difficult to know exactly what Socialists really mean. Time was when Marx's Capital was the Socialist Bible; but its authority is now rejected, and no other body of doctrine has been set up in its place. The controversy therefore proceeds under this difficulty, that the attackers have to formulate as best they can the arguments of the defenders. Not unnaturally, the case as stated by a hostile critic is- repudiated by some of the Socialist army, and the discussion is conducted under a running commentary which alleges mis- representation and misunderstanding. There is 'not, and never has been, any practical illustration of a Socialist community surviving long enough to warrant us in basing argument on its experience, so there is a certain unreality about the whole disputation.

The strength of Socialism does not lie in argument or scientific analysis of conditions that in truth are inevitable, but in a perfectly legitimate discontent with many of the incidents of civilisation. We doubt, therefore, very much whether exposure of the impracticability of Socialism will really do much to allay the unrest of a suffering community. What the situation requires is a successful apology for the system of liberty and free exchange which, with many lets

A Critical Examination of Socialism. By W. H. Mallock. London John Murray. [6a.]

and-lindrances, has during historical times been becoming the progressive basis of existing society. Mr. Mallock's book, though it is not specifically addressed to this aspect of the controversy, makes its definite contribution thereto, and it is more valuable in this respect than as a hostile criticism of the nebulous aspirations of Socialism.

Those familiar with Mr. Mallock's earlier work will not be surprised to find that his main point is that the Socialist, in formulating the claims of Labour, has overlooked the import. ance of ability—the need of the directing mind—if mere manual labour is to be guided to any useful purpose. The course of the argument is obvious, familiar, and need not be repeated; but, as we have above pointed out, the author is met at once by those Socialists who have cut themselves adrift from the cruder doctrine of Marx, and who declare that they are quite ready to recognise the right of ability to a superior reward. Mr. Mallock retorts that though they may admit this in the study, they still rely on the prejudice of the Marxian doctrine when addressing a suffering and imperfectly instructed proletariat. In face of the more intelligent Socialist, he poses the difficulty of how, granted the necessity of the able man's direction, he is to be given liberty and opportunity of experiment, unless the resources of capital are put at his disposal. To this question, as far as we can see, no satisfactory answer from the Socialist point of view can be made, and the strategical advantage gained ought to be followed up by a reasoned apology for what, after• all, we suspect is an indispensable condition of human survival, —namely, some elementary recognition of the right of private property and personal initiative, a postulate or axiom which, if once granted, leads to much more. The scope and purpose of Mr. Mallock's book do not carry him far in this direction, but the course of his argu- ment makes us apprehend (and we take it that he would not dissent from our drawing this corollary) that the real issue lies further• back than he has put it in his main contention. The advantage which society derives from having adminis- trative ability encouraged to serve it is only one of the many advantages derived from the principle of liberty. Mr. Mallock has set out with his usual dialectical ingenuity the great part played by inventors and captains of industry, and this is a welcome and much-needed addition to the controversy ; but the issues at stake are too large to allow us to rest the base of existing civilisation on any but the broadest foundations.

We can give no better illustration of our point, which is one noticed by Mr. Mallock, but placed by him in a subordinate light, than by quoting from recollection some remarks which it was the privilege of the present writer to hear from the late Sir Benjamin Baker, one of the engineers of the great Forth Bridge. With the modesty of genius, he was disclaiming somewhat the view so persis- tently put forward by Mr. Mallock. The cantilever system of bridge-building was known, he said, to engineers in India before the Christian era. The conditions which brought the Forth Bridge into existence were not so much the skill of the engineer or the ability of the contractors as the concen- tration of demand for the economy of time and labour which resulted from this great public convenience. Antecedent to the service of the able man were,' in this case, several contributory conditions,—the convergence of railway traffic to the shores of the Forth, important centres of industry separated by the inconvenient, stormy channel, and capital available for a project which it required no particular ability or insight to see would be of immense advantage if it could be successfully carried out. The distinguished engineer• above quoted, with a well-justified pride in his profession, added : "These things are largely a question of paying. There are few things in reason that we engineers won't do for you— if you are prepared to pay." This view of the situation contains, perhaps, some reconciliation of the divergence of opinion between himself and Mr. Herbert Spencer• on " The Great Man Theory " to which Mr. Mallock seems to us to attach a somewhat unnecessary importance. There is much in the occasion and the hour, as well as in the man. We require, it is true, liberty and security for the exercise of the ability of the great man, but we need also the same conditions for the growth of purchasing power and the spirit of adventure among classes whose only relation to greatness is the cumulative result of numbers and small savings.