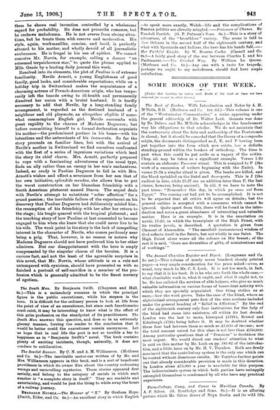 volume of nearly seven hundred closely printed pages—a very ample consideration for the price asked—owes, as usual, very much to Mr. C. S. Loch. It is not too much, in fact, to say that it is his book. It is he who sets forth the whole case,— what charitable work is, what it ought, and what it ought not, to be. He has enlisted the services of able helpers, who give us much valuable information on various forms of benevolent activity with which they are specially acquainted. One thing strikes us at once,—how the work grows. Take the case of the.blind, whom an alphabetical arrangement puts first of the nine sections included under the general beading of " Relief in Affliction." By the end of the eighteenth century only four institutions for the help of the blind had come into existence, all within its last decade. London was the last to move, Liverpool (1791), Bristol and Edinburgh (1793) being before it. It may be doubted whether these four had between them as much as 41,030 of income ; now the total amount raised for this class is not less than .2250,000. Among particular questions that of " Pensions " is doubtless the most urgent. We would direct our readers' attention to what is said on this matter by Mr. Loch on pp. 181-82 of the introduc- tion, and a little later on by Mr. H. V. Toyubee. Both are firmly convinced that the contributory system is the only one which can be worked without disastrous results. Mr. Toynbee further points out that already considerable provision is made in this direction. In London alone £75,000 a year is available for this purpose. The indiscriminate system in which both parties have unhappily entangled themselves is condemned by all who have any practical experience.