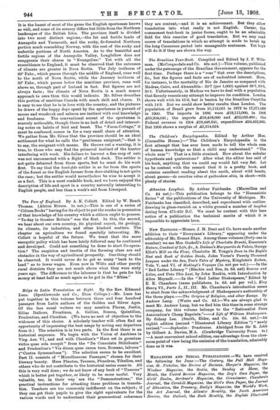 The Face of England. By A. K. Collett. Edited by

W. Beach Thomas. (Alston Rivers, ls. net.)—This is one of a series of "Citizen Books" having for its object to put the reader in possession of that knowledge of his country which a citizen ought to possess. "To-day in Greater Britain" was the first. In this, the second, we hear about our own country, its physical aspect, its geology, its climate, its industries, and other kindred matters. The chapter on agriculture we found specially interesting. Mr. Collett is hopeful of the future. We trust that the more energetic policy which has been lately followed may be continued and developed. Could not something be done to start Co-opera- tion P The suspicion and inertia of the farming class are sad obstacles in the way of agricultural prosperity. One thing should be observed. It would never do to get so many "back to the land" as to lower wages. Even now in Wilts and other purely rural districts they are not much above what they were sixty years ago. The difference to the labourer is that he gets for his money at least half as much again as he got in the "fifties."