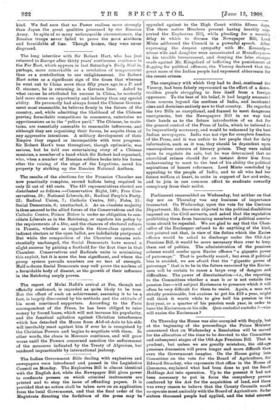 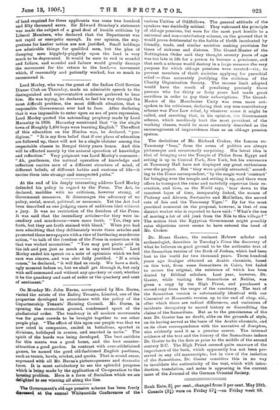 On Thursday the House was also occupied with Supply, but

at the beginning of the proceedings the Prime Minister announced that on Wednesday a Resolution will be moved for the allocation of the time to be devoted to the Committee and subsequent stages of the Old-Age Pensions Bill. That is prudent; but unless we are greatly mistaken, the old-age pensions discussion will prove longer and more difficult than even the Government imagine. On the House going into Committee on the vote for the Board of Agriculture, Sir Edward Strachey, who represents that office in the House of Commons, explained what had been done to put the Small Holdings Act into operation. Up to the present it had not been necessary to put in force the compulsory powers conferred by the Act for the acquisition of land, and there was every season to believe that the County Councils would co-operate most amicably with the Board of Agriculture. So far sixteen thousand people had applied, and the total amount

of land required for these applicants was some two hundred mid fifty thousand acres. Sir Edward Strachey's statement was made the subject of a good deal of hostile criticism by Liberal Members, who declared that the Department was not rapid or energetic enough. In our opinion, the sug- gestions for hastier action are not justified. Small holdings are admirable things for qualified men, but the plan of dumping men higgledy-piggledy upon the land is very much to be deprecated. It would be sure to end in scandal and failure, and scandal and failure would greatly damage the movement for the return to the land,—a movement which, if reasonably and patiently worked, has so much to recommend it.