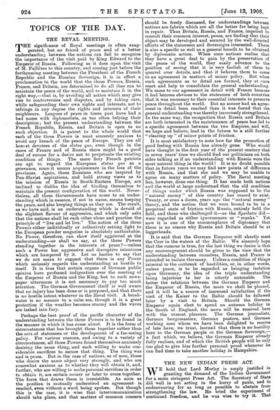 nu; REVAL MEETING. THE significance of Royal meetings is often exag- gerated, but no friend of peace and of a better understanding between the nations can fail to recognise the importance of the visit paid by King Edward to the Emperor of Russia. Following as it does upon the visit of M. Fallieres to this country, and coming just before the forthcoming meeting between the President of the French Republic and the Russian Sovereign, it is in effect a proclamation to the world that the three Powers, Russia, France, and Britain, are determined to do all they can to maintain the peace of the world, and to maintain it in the right way,—that is, by avoiding all action which may give rise to controversies and disputes, and by taking care, while safeguarding their own rights and interests, not to infringe in any degree the rights and interests of their neighbours. Leagues of peace in limes past have had a bad name with diplomatists, as too often belying their description ; but the present understanding between the French Republic, Russia, and Britain is open to no such objection. It is patent to the whole world that each of the three Powers is most sincerely anxious to avoid any breach of the peace of Europe. They are all honest devotees of the status quo, even though in the cases of France and of Russia there might be a good deal of excuse for a desire not to perpetuate the existing condition of things. The more fiery French patriots are apt to regard the European status quo as a grievance, since it means acquiescence in the loss of the provinces. Again, those Russians who are inspired by Pan-Slavist aspirations, and hold strong views as to the mission of Russia in South-Eastern Europe, are inclined to dislike the idea of binding themselves to maintain the present configuration of the world. Never- theless, all three Governments have come to an under- standing which in essence, if not in name, means keeping the peace, and also keeping things as they are. The result, as we have said, is an understanding which is devoid of the slightest flavour of aggression, and which only asks that the nations shall let each other alone and practise the principle of " live and let live." The notion of the three Powers either individually or collectively setting light to the European powder magazine is absolutely unthinkable. No Power, therefore, can show itself aggrieved at the understanding—or shall we say, at the three Powers standing together in the interests of peace P—unless such a Power has aggressive and disruptive intentions which are hampered by it. Let us hasten to say that we do not mean to suggest that there is any Power which seriously regards the understanding as hostile to itself. It is true that certain organs of German public opinion have professed indignation over the meeting of the Emperor of Russia and the King, but to such news- paper utterances it is not necessary to pay too much attention. The German Government itself is well aware that no injury has been done or is purposed, and that there is no hostile intent whatever in the Reval visit. A break- water is no menace to a calm sea, though it is a great protection if the weather becomes stormy and the waves are lashed into fury.

Perhaps the best proof of the pacific character of the understanding between the three Powers is to be found in the manner in which it has come about. It is the force of circumstances that has brought them together rather than the acts of statesmen or the development of a far-seeing policy. For various reasons, and owing to a variety of circumstances, all three Powers found themselves anxiously desiring the same thing, and each willing to make con- siderable sacrifices to secure that thing. The thing was and is peace. But in the case of nations, as of men, those who desire the same object very strongly, and who are somewhat anxious as to whether they will obtain it, and, further, who are willing to make personal sacrifices in order to obtain it, are certain sooner or later to come together. The force that draws them is irresistible. As soon as the position is mutually understood an agreement is reached, even without a word being spoken. But though this is the case, it is wise that intercommunication should take -placa, and that matters of common concern should be freely discussed, for understandings between nations are fabrics which are all the better for being kept in repair. Thus Britain, Russia, and France, impelled to consult their common interest, peace, are finding that their object may be developed and secured by the well-directed efforts of the statesmen and Sovereigns interested. There is also a specific as well as a general benefit to be obtained by diplomatic action. When once nations realise that they have a great deal to gain by the preservation of the peace of the world, they easily advance to the position of seeing that it is very foolish of them to quarrel over details, and that it behoves them to come to an agreement in matters of minor policy. But when such agreements as to detail are formed, they at once react and help to consolidate the general understanding. We came to our agreement in detail with France because it had become obvious to the statesmen of both countries that it was necessary to their essential interests to preserve peace throughout the world. But no sooner had an agree- ment in detail been reached than it was found that the general understanding was thereby immensely strengthened. In the same way, the recognition that Russia and Britain are both interested in the maintenance of peace has led to a specific agreement between the two Empires, and will, we hope and believe, lead in the future to a still further " clearing up " of minor points of friction.

It is most satisfactory to note how far the promotion of good feeling with Russia has already gone. Who would have thought in the first year of the present century that in seven years' time we should find our politicians on both sides talking as if an understanding with Russia were the most natural thing in the world ! It is no doubt possible that in future years we may find new points of difference with Russia, and that she and we may be unable to agree on many matters of policy. The Reval meeting has, however, done one thing. It has made both nations and the world at large understand that the old condition of things under which Russia was supposed to be the " natural enemy " of this country has ceased to exist. Twenty, or even a dozen, years ago the "natural enemy" theory, and the notion that we wore bound to be in a perpetual state of friction with Russia, entirely held the field, and those who challenged it—as the Spectator did— were regarded as either ienoramuses or " cranks." Yet now it is one of the commonplaces of diplomacy that there is no reason why Russia and Britain should be at loggerheads.

It is said that the German Emperor will shortly meet the Czar in the waters of the Baltic. We sincerely hope that the rumour is true, for the last thing we desire is that any encouragement should be given to the view that the understanding between ourselves, Russia, and France is intended to isolate Germany. Unless a condition of thinas inimical to the outbreak of hostilities, or, in other words, unless peace, is to be regarded as bringing isolation upon Germany, the idea of the triple understanding being injurious to her is utterly untenable. The better the relations between the German Emperor and the Emperor of Russia, the more we shall be pleased, and it will be a source of increased satisfaction if the visit of the Kaiser to the Baltic should be followed later by a visit to Britain. Should the German Emperor again elect to spend an autumn holiday in the South of England, the news will be received here with the utmost pleasure. The German journalists, German burgomasters, German pastors, and German working men whom we have been delighted to receive of late have, we trust, learned that there is no hostility here to the German people or the German Sovereign,— a fact which, we believe, the German Emperor already fully realises, and of which the British people will be only too glad to give him further personal proof whenever he can find time to take another holiday in Hampshire.