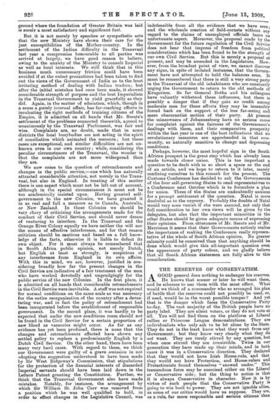 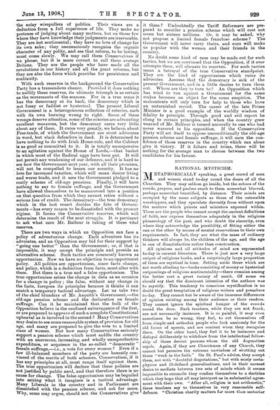 THE RESERVES OF CONSERVATISM.

AGOOD general does nothing to endanger his reserves. He knows that sooner or later he will want them, and he schemes to use them with the most effect. What would we think of a commander who so arranged his plan of battle that the reserves could not possibly be used, or, if used, would be in the worst possible temper ? And yet that is the danger which faces the Conservative Party to-day. The vast majority of the British people have no party label. They are silent voters, or they do not vote at all. You will not find them on the platform at Liberal rallies or Primrose League demonstrations. They are individualists who only ask to be let alone by the State. They do not in the least know what they want from any Government; but they know very clearly what they do not want. They are rarely stirred by any question, but when once stirred they are irresistible. Twice in our generation they have made up their minds, and in both cases it was in a Conservative direction. They declared that they would not have Irish Home-rule, and that they would not have Protection, and Home-rulers and Protectionists found themselves " snowed under." This tremendous force may be exercised either on the Liberal or Conservative side ; but the thing to notice is that it is always Conservative in character. Now it is by virtue of such people that the Conservative Party is going to win back to power. They are not ignoble allies, as some of our critics would have us suppose. They are, as a rule, far more responsible and serious citizens than ' the noisy wirepullers of politics. Their views are a deduction from a full experience of life. They make no - pretence of judging about many matters, but on those few where they have knowledge their judgments are irrevocable. They are not sentimental; they have no love of change for its own sake; they unconsciously recognise the organic character of any polity, and see that reform, to be lasting, must come slowly. We may call them Conservatives if we please, but it is more correct to call them average Britons. They are the people who have made all the revolutions in our history and all the great reforms, but they are also the force which provides for persistence and continuity.

With such reserves in the background the Conservative Party has a tremendous chance. Provided it does nothing to nullify these reserves, its ultimate triumph is as certain as the movements of the seasons. For in a true sense it has the democracy at its back, the democracy which is not fussy or faddist or hysterical. The present Liberal Government is a heterogeneous collection of coteries, each with its own burning wrong to right. Some of these wrongs deserve attention, some of the coteries are advocating excellent measures, but the democracy cares very little about any 'of them. It cares very greatly, we believe, about Free-trade, of which the Government are stout advocates in word, but slack defenders in deed. It is determined to have nothing to do with Irish Home-rule, and the Cabinet is as good as committed to it. It is totally unresponsive to an agitation against the House of Lords,—that basket in which most of the Radical eggs have been put. It will not permit any weakening of our defences, and it is hard to see how the Government next year, with all their promises, will not be compelled to lessen our security. It has no , love for increased taxation, which will mean dearer living and worse trade, and it sees the Government pledged to a, costly scheme of old-age pensions. Finally, it will have nothing to say to female suffrage, and the Government have allowed themselves to be mauceuvred into a position on that question from which they cannot retire without a serious loss of credit. The democracy—the true democracy which in the last resort decides the fate of Govern- ments —has every reason to be dissatisfied with the present regime. It forms the Conservative reserves, which will determine the result of the next struggle. It is pertinent to ask what care Mr. Balfour ii taking of these vital reserves.

There are two ways in which an Opposition can face a. policy of adventurous change. Each adventure has its advocates, and an Opposition may bid for their support by "going one better" than the Government ; or, if that is impossible, it may accept the principle and provide an alternative scheme. Such tactics are commonly known as opportunism. Now we have no objection to an opportunist policy. All politics are opportunism, since facts change, and policy, which is a deduction from facts, must alter with them. But there is a true and a false opportunism. The true opportunism seizes the change in data as an occasion for a change in policy ; the false, without any change in the facts, foregoes its principles because it thinks it can snatch a temporary tactical advantage. Let us take two of the chief blunders of Mr. Asquith's Government,—the old-age pension scheme and the declaration on female suffrage. Can it be maintained that the bulk of the Opposition believe in the confused extravagance of the first, or are prepared to approve of such a complete Constitutional upheaval as is involved iu the second ? Many Conservatives may desire to see some reasonable system of provision for old age, and many are prepared to give the vote to a limited class of women. But how many Conservatives seriously support a pension scheme which must saddle the country with an enormous, increasing, and wholly unreproductive expenditure, or acquiesce in the so-called " democratic " female suffrage,—i.e., a vote for every woman ? Even if a few ill-balanced members of the party are honestly con- vinced of the merits of both schemes, Conservatism, if it has any principles at all, must range itself against them. The true opportunism will declare that these policies are not justified by public need, and that therefore there is no cause for change. The false opportunism may be beguiled into seizing what it imagines is a tactical advantage. Many Liberals in the country and in Parliament are dissatisfied with the pension scheme, and ask for more. Why, some may argue, should not the Conservatives give it them ? Undoubtedly the Tariff Reformers are pre- pared to consider a pension scheme which will cost not seven but sixteen millions. Or, it may be asked, why not propose a limited female franchise scheme ? The Government will never carry theirs, and ours will make us popular with the women and their friends in the country.

No doubt some kind of case may be made out for such tactics, but we are convinced that the Opposition, if it ever attempts them, will alienate its reserves. For such tactics mean a betrayal of the true Conservative standpoint. They are the kind of opportunism which ruins its advocates. Assume that the democracy is sick of the present Government, and in a little desires to turn them out. Whom are they to turn to ? An Opposition which has tried to run against a Government for the same stakes becomes an object for the same suspicion. The malcontents will only turn for help to those who have an untarnished record. The career of the late Prime Minister is a good example of the worldly wisdom of fidelity to principle. Through good and evil report he clung to certain principles, and when the country grew wearied of Mr. Balfour it turned naturally to one who had never wavered in his opposition. If the Conservative Party will set itself to oppose unconditionally the old-age pension scheme and female suffrage, it will earn the con- fidence of those reserves in the country which can alone give it victory. If it falters and trims, there will be nothing for the average man to choose between the two candidates for his favour.