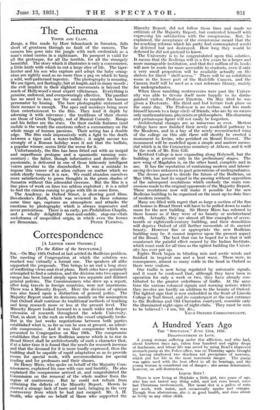 Rango, a film made by Herr Schoedsack in Sumatra, falls short of greatness through no fault of the camera. The camera has gone into the jungle with such credentials as a man's mind carries in a nightmare. Its passport is valid for all the grotesque, for all the terrible, for all the strangely beautiful. The story which it illustrates is only a convenience, a little knife with which to cut a large slice of life. The tiger- hunter and his son who capture and adopt the baby orang- utan are rightly used as no more than a peg on which to hang a wild, well-patterned tapestry. The photography is amazing. We see tigers, not fleetingly, but at length, and in many moods ; the evil implicit in their slightest movements is beyond the reach of Hollywood's most expert villainesses. Everything is genuine, unforced, and overpoweringly effective. The panther has no need to leer, nor the snake to emulate his human personator by hissing. The bare photographic statement of their menace is enough. The apes and monkeys bring more than entertainment to the film. They lend it depth by adorning it with relevance ; the traditions of their chorus are those of Greek Tragedy, not of Musical Comedy. Rango and his father are the stars. On their mobile features (and mobile is the word) the emotions reflect a commentary on the whole range of human passions. Their acting has a double edge. The film ends impressively with a fight to the death between a tiger and a water-buffalo ; it might savour too strongly of a Roman holiday were it not that the buffalo, a popular winner, seems little the worse for it.

Unfortunately, the film has been fitted out with an insipid and superfluous prologue and a spasmodic running com- mentary ; the latter, though informative and decently dis- passionate, is delivered in one of those hideously intelligent voices peculiar to the disembodied. It was a mistake to impose this veneer of an alien culture on matter which we relish chiefly because it is raw. We could abandon ourselves more satisfactorily to green thoughts in the green shades of Sumatra without this adenoidal cicerone. But the film is a fine piece of work on lines too seldom exploited ; it is a relief to find the cinema coming to grips with life in some form. The Academy, in Oxford Street, is showing good films. Dovshenko's Earth, which was reviewed in these columns some time ago, captures an atmosphere and attacks the emotions by photography which is always impressive and never pretentious. There is an early, pre-Prohibition Chaplin, and a wholly delightful boot-and-saddle, stap-me-vitals melodrama of unspecified origin, in which even the horses