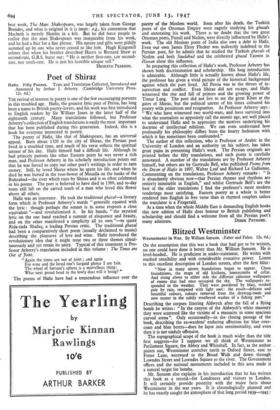 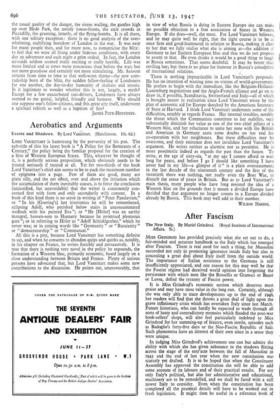 Faber. 12s. 6d.) ON the assumption that this was a book that had got to be written,

no one could have done it better than Mr. William Sansom. He is level-headed.. He is proficient in under-statement. He writes with marked sensibility and with considerable evocative power. Listen to this excellent description of London streets, after the first blitz :

" Now in many streets foundations began to appear. Clean foundations, the maps of old kitchens, honeycombs of cellar. And rising above to either side the different coloured wallpapers of rooms that had once occupied the sky. The wallpapers re- sponded to the weather. They were powdered by blast, washed pale by rain, tempered with light soot: the result—delicate and beautiful colours, colours removed from the drawing-room and now nearer to the subtly weathered washes of a fishing port."

Describing the corpses littering Aldwych after the fall of a flying bomb he writes : " In' the canyon of the Aldwych's white masonry they were scattered like the victims of a massacre in some spacious curved arena ". Only occasionally—in the closing passage of the book, describing the ex-wardens' enduring affection for blue over- coats and blue berets—does he lapse into sentimentality, and even then it is not unduly offensive.

The topographical scope of the book is much wider than the title first suggests—for I suppose we all think of Westminster as Parliament Square, the Abbey and Whitehall. In fact, as the author points out, Westminster stretches north to Oxford Street, east to Fetter Lane, westward to the Broad Walk and down through Lowndes Street and Lowndes Square to the river. The Government offices and the national monuments included in this area made it a natural target for bombs.

Mr. Sansom also explains in his introduction that he has written this book as a record—for Londoners and visitors to London.

It will certainly provide posterity with the major facts about Westminster in the war years. It is chronologically planned and he has exactly caught the atmosphere of that long period 1939-1945:

the casual quality of the danger, the sirens wailing, the gunfire high up over Hyde Park, the untidy house-fronts, the stale crowds in Piccadilly, the grunting, latterly, of the flying-bombs. It is all there, with one solitary exception: there is no good analysis of the over- whelming, stultifying boredom- of London in the war. It was easy for many people then, and for more now, to romanticise the blitz : to feel that we were all living under hideous conditions, with every day an adventure and each night a grim ordeal. In fact, the London air-raids seldom seemed really exciting or really horrific. Life was more limited and at times more precarious than before the war; but not more grandiose and certainly not more stimulating. Mr. Sansom returns from time to time to that well-worn theme—the new com- radeship born of the blitz, the sudden fellow-feeling of Londoners for one another, the day-to-day humanity of shelters and streets. Is it legitimate to wonder whether this is not, largely, a myth? Except for a few exacerbated taxi-drivers, Londoners have always seemed to me genial, helpful, friendly and humane. Why should one suppose one's fellow-citizens, and this great city itself, underwent a spiritual rebirth as well as a baptism of fire?