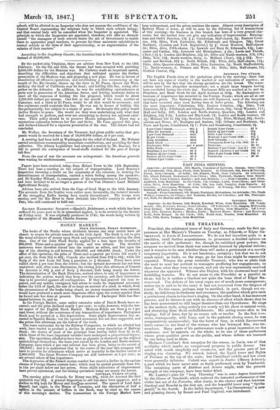 Fraschini, the celebrated tenor of Italy and Germany, made his first ap- pearance at Her Majesty's Theatre on Tuesday, as Edgard°, or Edgar Ra- venswood, in Lucia di Lammermoor. We do not feel ourselves quite in a condition, until further acquaintance, to pronounce a decided opinion on the merits of this performer; for, though he exhibited great powers, the pleasure we derived from them was somewhat lessened by physical defects; and it remains to be seen whether these will make a permanent or a merely temporary impression. Be is not handsome, certainly; but that we do not much mind; as looks, on the stage, go for less than might be reasonably expected. Witness the great contralto Pesaroni; who was so plain that she used to send her portrait to managers proffering her engagements, to show them what they were to expect, and yet she was rapturously received wherever she appeared. Witness also Duprez, with his enormous head and forbidding features. We do not mean to cite Fraschini as a parallel to them; but he is neither a Gardoni nor quite the beau ideal of Edgar Ra- venswood. The defects of his vocal organ are of much more consequence; unless (as is said to be the case) it had not recovered from the fatigues of traveL To this cause, perhaps, may be ascribed, in part, though not en- tirely, its deficiency in freshness and sweetness, the qualities which give such a preeminent charm to Gardonis singing. On the other hand, it has immense powers; and he throws it out with an absence of effort which shows that he has been accustomed to still larger theatres than our Operahouse. He sings in the modern style, using entirely (or nearly so) his chest or natural voice, and abstaining from florid embellishments. His acting seems akin to his singing; full of force, but by no means soft or tender. In the first love- scene, consequently, with Lucy, and in the pathetic closing scene, he was comparatively unsuccessful; but the burst of fury, in which Ravenswood hurls curses on the head of the woman who has betrayed him, was tre- mendous. Many parts of his performance made a great impression on the audience; and he appears, on the whole, to be one of those performers whose great qualities grow on the public, and whose defects are lessened by our being used to them.

Madame Castellan's first reception for the season, in Lucia, was of that cordiality which marks an unequivocal progress in public favour. She acted with much simplicity and sweetness, and the greater part of' her singing was charming. We missed, indeed, the liquid tones and flights of Persiani at the top of the scale; but Castellan's middle and low notes were generally delicious. Coletti was superb in Enrico (Henry Ashton); a part which we have never seen so finely performed, even by Tamburini. The remaining parts of Bidebent and Arturo might, with the present strength of the company, have been better filled. Mr. Lumley's plan for "long Thursday" was in sonic degree frustrated by the illness of Sanchioli ; which reduced the intended performance of the entire last act of La Favorite, after Lucia, to the chorus and duet between Gardoni and Bouche in the first act, and the beautiful tenor song " Spirit° gentil," in the fourth. In the ballet department, "La Slavonienne," a new and pleasing dance, by Rosati and Paul Taglioni, was introduced.